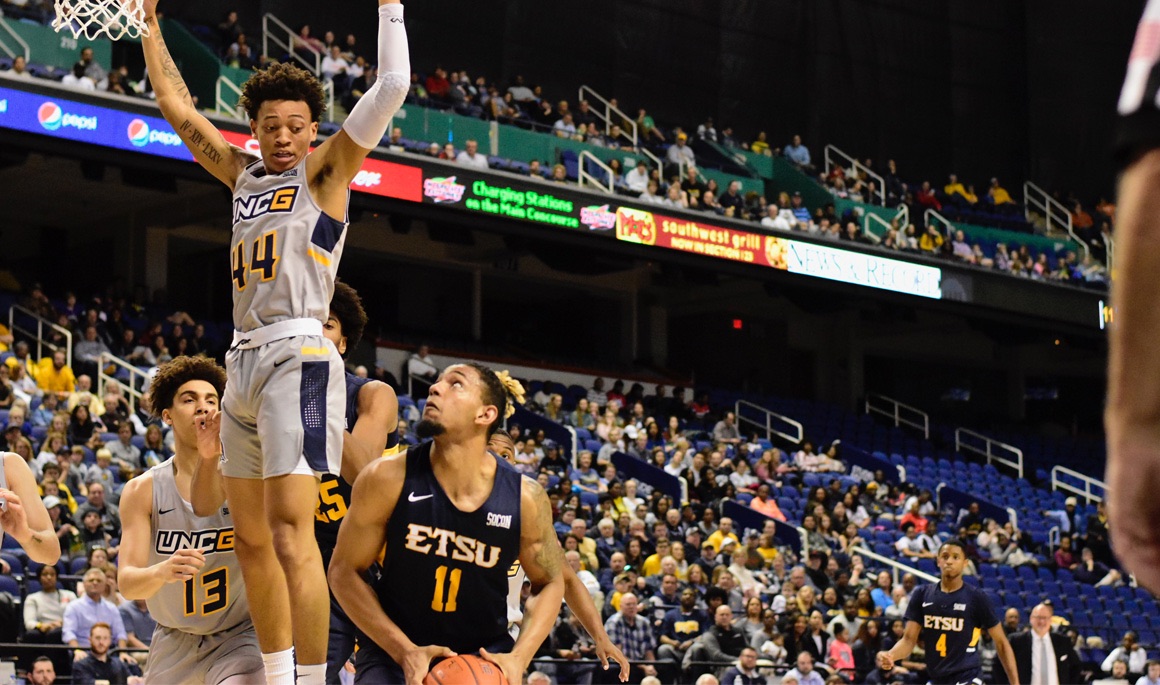 GREENSBORO, N.C. (Feb. 24, 2019) -- Freshman guard Daivien Williamson (Winston-Salem, N.C.) gave the Buccaneers the lead with a pair of free throws with 15.4 seconds remaining, but UNCG sophomore guard Isaiah Miller answered with the game-winning bucket. Miller scored on a running lay-up with 3.8 seconds remaining to lift the Spartans to a 60-59 win over ETSU on Sunday afternoon from the Greensboro Coliseum.

The Bucs’ inbounds pass to half court was intercepted by Francis Alonso and the Spartans ran out the clock for the win.

Williamson was one of three Buccaneers to finish in double figures as he totaled 10 points on 6-of-6 shooting at the free throw line, while junior Jeromy Rodriguez (Santiago, Dominican Republic) registered his 14th double-double of the season. Rodriguez finished with 16 points and 17 rebounds, while going 6-of-8 from the field but 4-of-11 at the free throw line. Junior guard Tray Boyd III (Memphis, Tenn.) scored eight of his 11 points in the first half.

The Bucs had their three-game win streak snapped and fell to 22-8, 12-5 in SoCon play, while UNCG took a strong hold of second-place in the league standings after improving to 24-5, 13-3. ETSU currently has a half-game lead over Furman for third with the Paladins playing at Samford on Thursday and at Chattanooga on Saturday. The Bucs wrap up regular season play at home on Saturday when they host Western Carolina at 4 p.m. inside Freedom Hall.

In a game that saw seven ties and 11 lead changes, neither team led by more than three points in the final 10 minutes.

The Bucs led by five, 52-47, when Lucas N’Guessan (De Lier, Netherlands) connected on a jumper with 10:10 remaining; however, ETSU went cold down the stretch.

ETSU went on a six-minute scoring drought to see UNCG regain a 54-52 lead following a jumper from Demetrius Troy at the 4:27 mark. Isaiah Tisdale (Lexington, Ky.) finally snapped the scoring skid to even the game at 54 with 4:10 remaining.

From there, the game had four lead changes and two ties, while ETSU held three leads in the final three minutes but could not hold on. N’Guessan made two free throws with 2:47 remaining to go back ahead, 56-54 – and after Francis Alonso missed the front-end of a 1-and-1 on the ensuing possession – the Bucs missed a jumper which led to a game-tying dunk by James Dickey with 1:46 showing on the clock.

Bo Hodges (Nashville, Tenn.) – who played in foul trouble the entire game – missed his first attempt of a 1-and-1 on the Bucs’ next trip down, and after a turnover from Alonso, the Bucs regained a one-point lead when Rodriguez made the second free throw, making it 57-56 with 47 seconds left. Miller then answered the first time with a jumper to regain the lead, but Williamson drove the lane and was fouled by Dickey with 15.4 seconds remaining. The Buccaneer freshman made both attempts to put ETSU up one; however, Miller stepped up again with his contested lay-up for the game-winner with under four seconds left.

Dickey finished with a double-double for the Spartans as he ended with 11 points and 11 rebounds. Miller scored a team-high 13 points on 6-of-15 shooting, and Alonso totaled 12 points along with being held without a three-pointer in his final regular season home game.