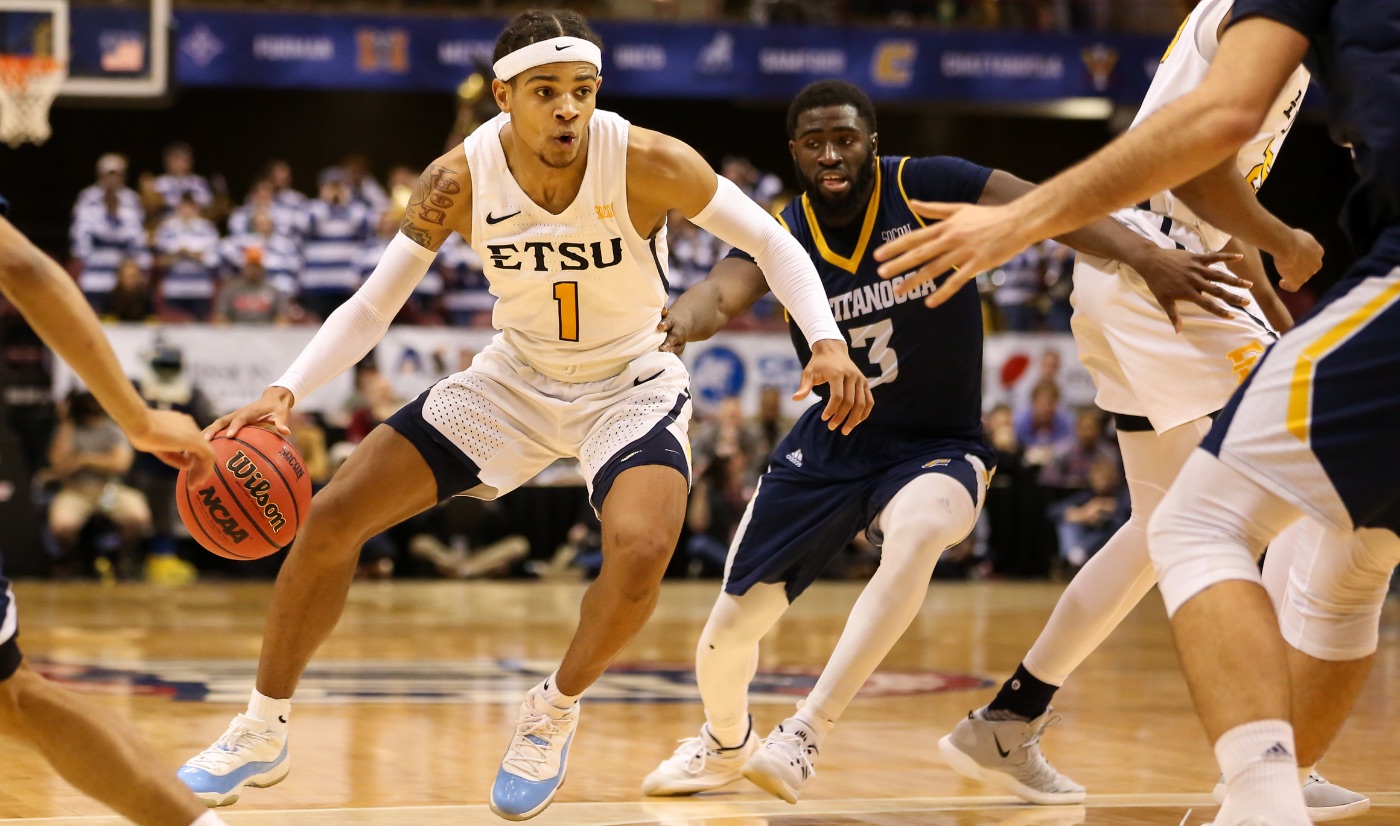 The ETSU men’s basketball team defeated in-state rival Chattanooga for the eighth consecutive time following the Buccaneers’ 68-64 win over the Mocs in front of 5,443 fans in Saturday’s quarterfinal game of the Southern Conference Tournament inside the U.S. Cellular Center in Asheville, N.C.

The win, which advanced the fourth-seeded Bucs into Sunday’s semifinal game against top-seeded Wofford, also marked ETSU’s 100th since head coach Steve Forbes took over the program in 2015-16 – setting a new Buccaneer record. The Bucs are the 18th NCAA Division I program to record the 100-win mark since this time span, while Coach Forbes is the 11th active Division I head coach to reach the 100-win milestone in their first four seasons. Coach Forbes also becomes the fifth coach in program history to win 100 games.

As a team, ETSU shot 44 percent from the field (28-63) and the Bucs’ bench outscored the Mocs, 38-9. Junior Lucas N’Guessan (De Lier, Netherlands) and freshman guard Daivien Williamson (Winston-Salem, N.C.) combined for 17 bench points. The Bucs forced 17 turnovers and turned those into 13 points, while grabbing 13 offensive rebounds for 14 second-chance points. Overall, ETSU was plus-4 on the glass, 38-34. Chattanooga was plus-6 in three-pointers made (10 to 4), while the Bucs went 8-of-14 at the free throw line, compared to the Mocs going 10-of-17.

With the win, ETSU improved to 24-8 on the season with the 24 wins being tied for seventh-most in program history. For the second straight year, Chattanooga’s season ended with a loss to the Bucs as the Mocs finished the 2018-19 campaign at 12-20.

Despite the Bucs taking a 4-3 lead in the opening minutes, Chattanooga took control by rattling off eight straight points to go ahead, 11-4 at the 16-minute mark. The Mocs held the lead for the next five minutes, but thanks to a 13-4 run, ETSU went back ahead 17-15 following a layup by Boyd with 10:35 remaining in the half.

The game remained tight for the next eight minutes as neither team led by as many as three points, but after the Mocs inched within a point, the Bucs scored seven unanswered to open a 37-30 lead with under a minute to play. Chattanooga ended the half with a three-pointer by Freshman of the Year Kevin Easley and ETSU took a four-point lead into the break.

The Bucs netted 13 points in the first eight minutes of the second half to open a nine-point lead following Boyd’s third triple of the night to make it 53-44 with 12:11 left in the game.

However, just as it looked like ETSU was ready to take control, Chattanooga continued fighting back.

The Bucs never trailed after the quick burst to start the second half, but the Mocs pulled within a point three different times in the final eight and a half minutes. Chattanooga scored eight straight points to make it 53-52 – and after ETSU went up 58-54 – Easley connected on a three to make it 58-57 with 4:19 remaining. Again, the Bucs moved back up four, but with the shot clock winding down, David Jean-Baptiste drained another three to make 62-61 at the 2:37 mark.

ETSU then gained a five-point lead with under a minute to play when Hodges and Boyd both scored on back-to-back possessions to make it 66-61 with 53 seconds left. The Mocs were able to cut the margin to two but Williamson iced the game with two free throws with 16 seconds to go en route to securing the four-point win.

The Bucs will play in the first semifinal on Sunday at 4 p.m. The game will be televised locally on ABC Tri-Cities as well as on ESPN+.

Tickets for the 2019 Ingles Southern Conference Men’s and Women’s Basketball Championships presented by General Shale are on sale now. Information about various ticket packages is below.

Enjoy a reserved seat close the action and VIP Hospitality access. VIP Hospitality will open one hour prior to each session and will include pre-game meals and complimentary beer and wine.