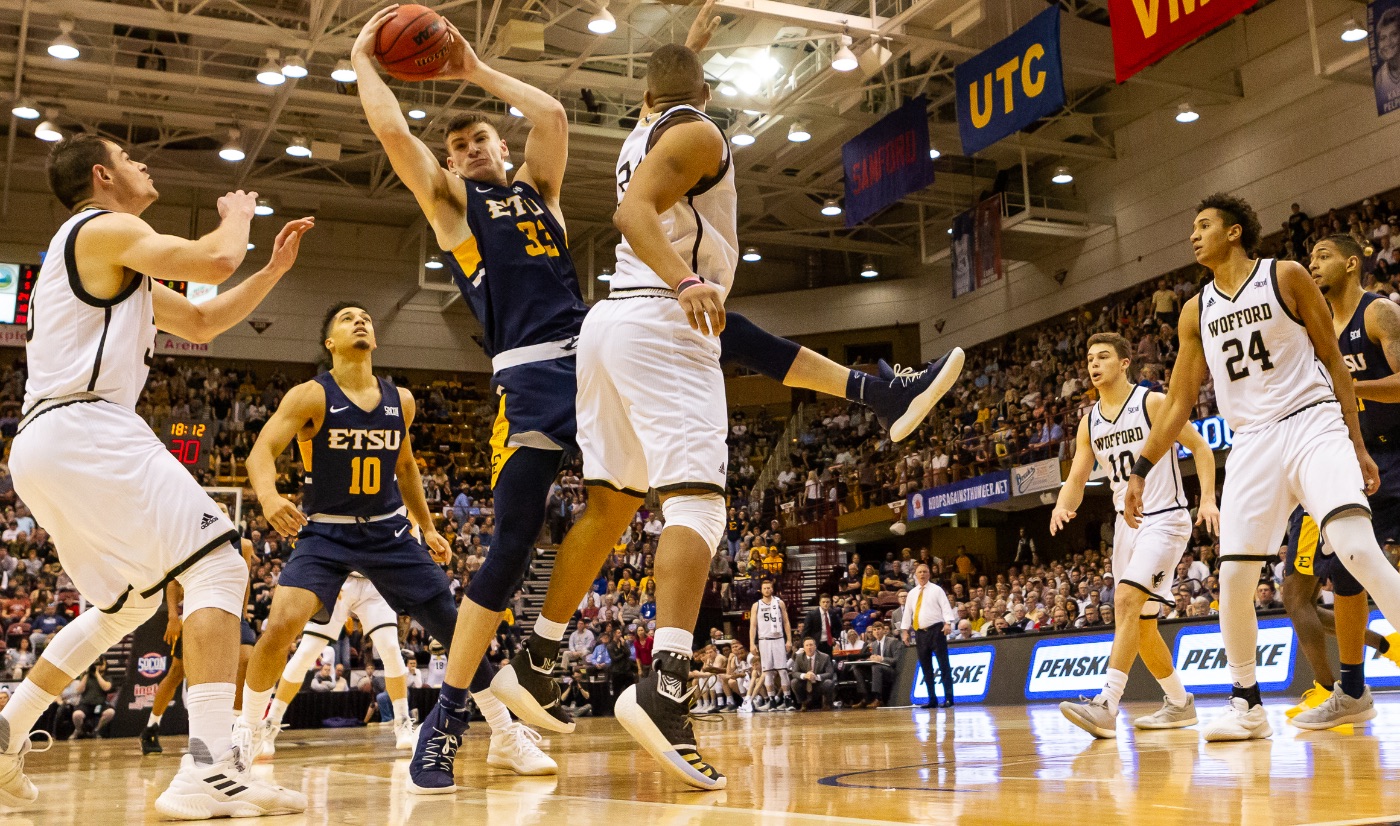 ASHEVILLE, N.C. (March 10, 2019) -- ETSU and Wofford Part III featured another heavyweight bout, but the third time wasn’t the charm for the Blue and Gold.

Despite having four players score in double figures, ETSU couldn’t overcome Wofford’s hot shooting as the 22nd-ranked Terriers defeated the Buccaneers, 81-72, in Sunday’s semifinal of the Southern Conference Tournament from the U.S. Cellular Center in Asheville, N.C.

ETSU shot 39 percent for the contest (22-56) and 37 percent from three (10-27), along with going 72 percent (18-25) at the free throw line – marking just the second time this season the Bucs fell when shooting over 70 percent at the stripe. Armus (7-of-8) and Tisdale (6-of-7) combined to go 13-of-15 at the line. For just the fourth time this season, ETSU was outrebounded as Wofford was plus-3 on the boards, 36-33, while adding 17 second-chance points on 10 offensive rebounds. The Bucs forced the Terriers into 17 turnovers and cashed those into 24 points; however, the Blue and Gold couldn’t cool off Wofford’s hot shooting when they needed a stop. The Terriers, who were led by SoCon Player of the Year Fletcher Magee’s game-high 26 points, shot 59 percent from the field (32-54) and 56 percent from beyond the arc (10-18). Magee accounted for six of the 10 threes and Nathan Hoover added three more to finish with 10 points.

The Bucs, who were looking to become the first team to reach four straight SoCon championships games since Chattanooga did so from 1992-95, moved to 24-9 following the loss, while Wofford extended its win streak to 19 straight games and improved to 28-4. The Terriers advanced to Monday night’s championship game and will take on the winner of UNCG-Furman at 7 p.m. on ESPN.

ETSU started the game strong as they scored seven of the first nine points and led for nearly the first seven-plus minutes. However, after a pair of free throws by Jeromy Rodriguez (Santiago, Dominican Republic) made it a 14-10 score with 13:40, the Terriers mounted a 13-0 run to grab momentum and took a 23-14 lead with less than nine minutes left in the first half.

The Bucs answered with back-to-back threes from Boyd and Williamson, while then pulling within two on four different possessions, but Wofford ended the half with five straight points to take a 37-30 lead into the break.

The second half started similar to the first as ETSU chipped away at the deficit by cutting it to four twice, but like they did in the closing stages of the first half, Wofford responded to go up 11, 51-40, following a Cameron Jackson layup at the 12:05 mark.

After the Terriers went back ahead by double digits on another Jackson lay-in with just under 10 minutes to go, the Blue and Gold threw another punch at Wofford.

With the Terriers leading, 59-49, the Buc scored the next six points – three-pointers by Boyd and Tisdale – to make it a 59-55 score with 8:43 remaining in the contest. Following a 30-second timeout, Wofford drew up a play for Magee and he knocked down a three to stop the run and regain momentum.

From there, Wofford took its largest lead of the night at 72-60 with 5:45 left, but again ETSU clawed back within six, 78-72, following two Tisdale free throws. From there, the Bucs had three possessions to inch closer but couldn’t convert and the Terriers hit three of their four free throws down the stretch to hold off the Buccaneer comeback.