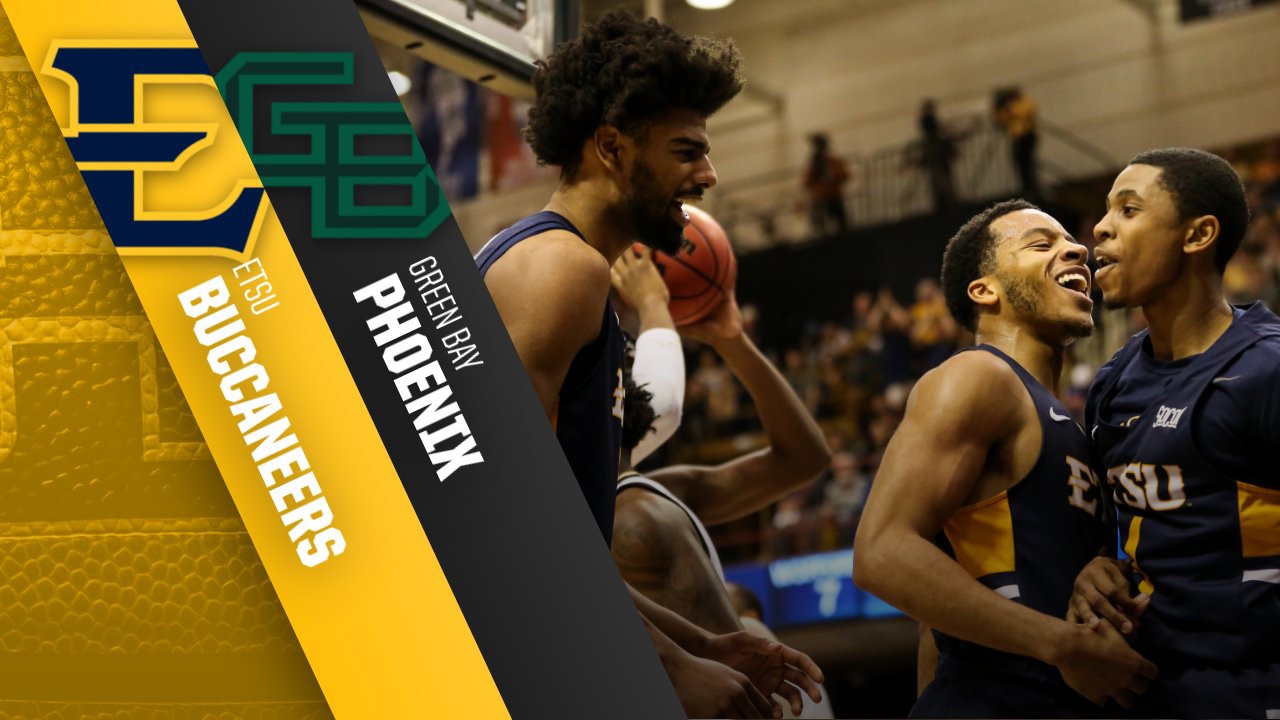 Hugh Durham Classic to be played Wednesday at 7 p.m. inside Freedom Hall

JOHNSON CITY, Tenn. (March 19, 2019) -- For the third time in the last four years and the 17th time in program history, the ETSU men’s basketball team will gear up for postseason play as the Buccaneers host Green Bay in the first round of the CollegeInsider.com Postseason Tournament on Wednesday night at Freedom Hall. The game, dubbed the Hugh Durham Classic, tips off at 7 p.m.

Tickets for Wednesday’s game can be purchased online at ETSUBucs.com or by calling the ETSU ticket office at 423-439-3878. Due to the short turnaround, fans are strongly encouraged to use the “Print At Home” function to receive their tickets. For those who do not use the “Print At Home” method, tickets will be available at will-call starting Wednesday at 5:30 p.m. at Freedom Hall.

Courtside Club hospitality is available for $15 per person and needs to be purchased in advance … Fans can purchase this online via ETSUBucs.com or by calling 423-439-3878.

Parking will be $5 (cash only) per car … Please note, your 2018-19 season parking pass is not valid for Wednesday’s game … Parking will be available on a first-come, first-served basis.

First and second rounds will be played March 18-25, quarterfinals will be held March 27-31, semifinals will be played April 2 and the championship is scheduled for April 4. The CIT uses the old NIT model in which there is no set bracket. Future round opponents are determined by the results of the previous round. All games at on-campus sites.

The Bucs, who have won five of their last seven games, enter the tournament with an overall record of 24-9 after reaching the semifinals of the Southern Conference Tournament. The 24 wins are tied for the seventh-most in program history, while ETSU has won 100 games since the start of the 2015-16. The 100 wins are the most over a four-year stretch in program history, while the Blue and Gold were the 18th team to accomplish the feat during this time frame.

Head coach Steve Forbes is a finalist for two national awards – the Skip Prosser Man of the Year award and the Hugh Durham award … The Skip Prosser award is presented annually to those who not only achieve success on the basketball court but who also display moral integrity off of it as well, while the Hugh Durham award is presented annually to the top mid-major coach.

When it comes to ETSU’s scoring, the Bucs are dominating their opponents in the paint -- the Blue and Gold are +428 (1298-870) in that statistical category ... The Bucs are averaging 39.3 points per game in the paint, while also adding 12.8 second-chance points per contest, 18.0 points off turnovers and 30.5 bench points per game ... In ETSU’s win over Hiwassee back on Nov. 8, the Bucs scored 70 of their 109 points in the paint, while the bench added 65 points in that contest ... The Bucs’ largest deficit overcome this season was 18 against Sam Houston State back on Nov. 20, where ETSU rallied for a 14-point win, 77-63 … ETSU is also 16-1 this season when leading at halftime, 21-1 when having a higher field goal percentage than its opponent, 15-0 when shooting over 50 percent, 14-4 when making more free throws, 10-2 when shooting over 70 percent at the free throw line, 23-2 when scoring over 70 points and 16-1 when holding opponents below 70 points.

Green Bay enters Wednesday’s game with an overall record of 17-16 and went 10-8 in the Horizon League ... The Phoenix fell to top-seeded Wright State in the semifinals of the conference tournament.

Green Bay is led by senior guard Sandy Cohen III as he is averaging a team-best 17.2 points per game, which ranks sixth in the Horizon League. Cohen has scored 20 or more points in five of his last seven games, while he also leads the Phoenix in field goals made (183), free throws made (150), rebounds per game (6.4), assists (150) and steals (63).

This will be Green Bay’s sixth postseason appearance in the last seven seasons ... The Phoenix played in the 2013 CIT, made back-to-back trips to the NIT in 2014-15, played in the 2016 NCAA Tournament and accepted a bid to the 2017 CBI.

Twelve of Green Bay’s wins have come at home this season, while they dropped 12 of their 16 games away from home.

ETSU defeated Green Bay in its only other meeting as the Bucs took down the Phoenix, 103-90, back on Nov. 17, 2015 inside Freedom Hall, which is the only prior meeting between the two programs. The game was a part of ESPN’s 24-hour college basketball marathon and tipped off at 6 a.m. on ESPN2.

Wednesday’s game will be video streamed online free of charge via WatchCIT.com … Kasey Marler and Bruce Tranbarger will have the call.

Fans can also tune into “Voice of the Bucs” Jay Sandos on the radio call via WXSM-AM 640 beginning with the Atmos Energy Pregame Show at 6:30 p.m.; CLICK HERE FOR LIVE AUDIO