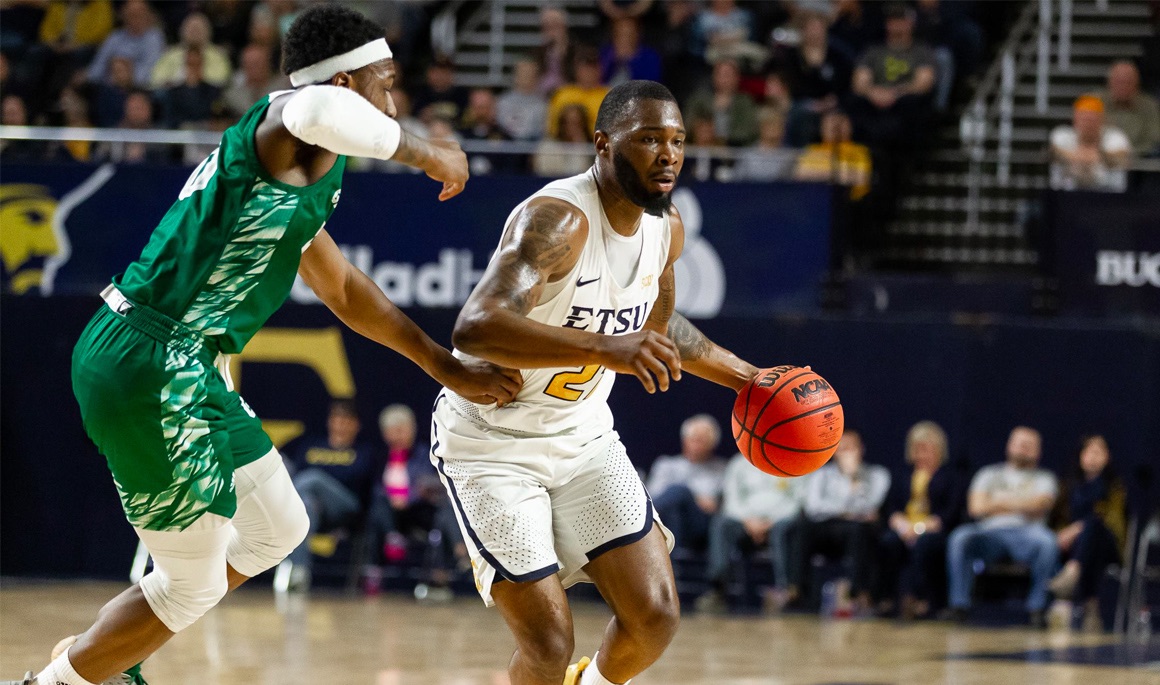 Short-handed Bucs rally but fall to Green Bay in opening round of CIT
Green Bay at ETSU | March 20, 2019
Related Links

JOHNSON CITY, Tenn. (March 20, 2019) -- Without the services of three starters and head coach Steve Forbes, the ETSU men’s basketball team erased an 18-point deficit; however, the Buccaneers couldn’t hold on as Green Bay closed the game on a 21-4 run to defeat the Blue and Gold 102-94 in the first round of the CollegeInsider.com Postseason Tournament on Wednesday night inside Freedom Hall.

With starters Jeromy Rodriguez (Santiago, Dominican Republic), Mladen Armus (Belgrade, Serbia) and Patrick Good (Johnson City, Tenn.) all out with injuries, the Bucs still saw five players score in double figures, while junior Kevon Tucker (Dacula, Ga.) came off the bench to net a career-high 17 points on 6-of-8 shooting (5-of-7 from beyond the arc).

With the loss, the Bucs – who were without Coach Forbes as his father passed away on Wednesday – ended their season at 24-10, while Green Bay advanced to the second round of the tournament after improving to 18-16. The 24 wins are tied for the seventh-most in program history, while ETSU made its 17th postseason appearance in program history, including Forbes taking the Blue and Gold to three trips in his first four seasons at the helm.

The Phoenix jumped out to a 20-5 run to start the first four and a half minutes and eventually built an 18-point lead when a three-pointer by PJ Pipes made it 32-14 with 11:31 remaining in the contest. From there, the lead remained around double figures until ETSU pulled within six with 1:23 left before the break, but Green Bay scored the final four points to take a 59-49 lead into the locker room.

With things not going in favor of the Blue and Gold over the first 20 minutes – and after the Buccaneer faithful saw ETSU cut its deficit to five (63-58) to start the first two-plus minutes of the second half – the Phoenix again extended their lead to double figures as they led 69-58 at the 15:44 mark.

However, with their backs against the wall, the Bucs stepped up and mounted a 23-8 run over the next seven-plus minutes to go ahead, 81-77, when Williamson hit Tisdale in transition for a lay-up at the 7:51 mark. Just a minute prior, ETSU took its first lead of the game when Boyd assisted on a Tisdale layup.

The Bucs eventually extended their lead to nine following a Tisdale triple to make it 90-81 with 6:24 remaining; unfortunately, ETSU couldn’t keep its foot on the gas.

The Phoenix finished the final six minutes and thirteen seconds on their 21-4 run to capture the Hugh Durham Classic trophy and the eight-point win.

ETSU last held the lead at 92-91 with 3:26 remaining, but Green Bay answered with a three-pointer on its next trip down the floor and the Bucs were only able to close the gap to two at 96-94 with 1:48 remaining before the Phoenix scored the final six points of the contest.