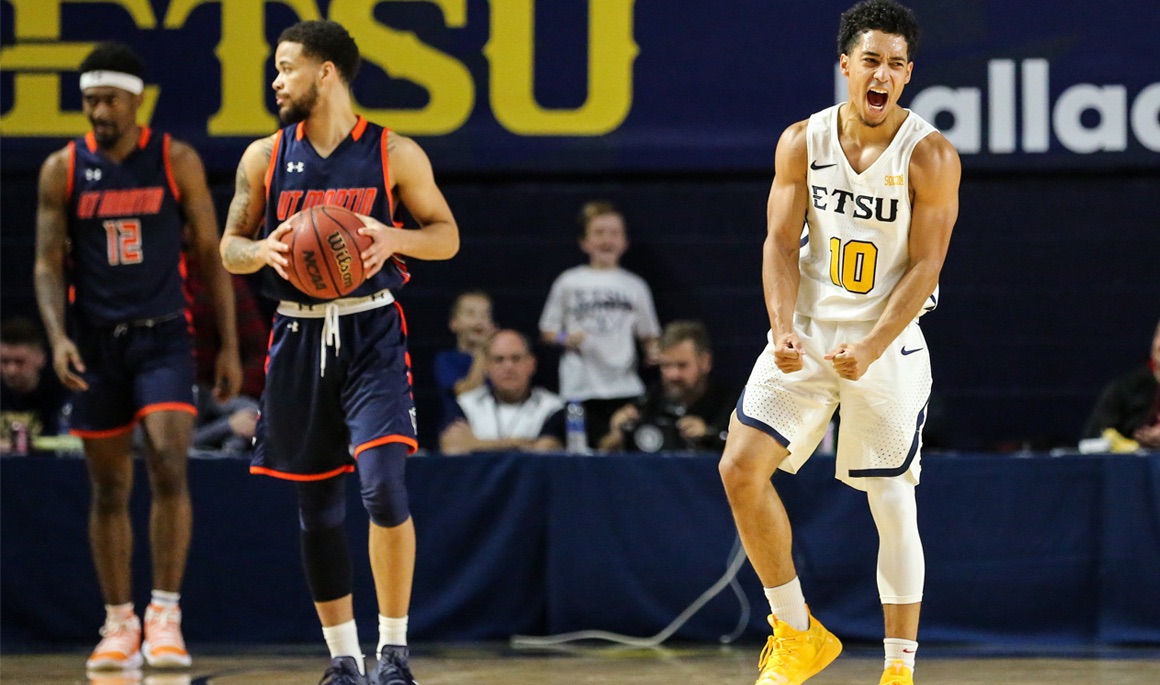 Good, who accounted for seven of the Bucs’ 10 made threes, helped provide a spark where the Blue and Gold shot 70 percent (21-30) in the final 20 minutes en route to scoring 53 points. After trailing by three at the break, the Bucs scored the first 10 points of the second half and eventually built a 24-8 run over the first seven minutes to take control of the contest.

With the win, ETSU improved to 2-0, marking the third time in the last five years the Bucs opened the season with consecutive victories. UT-Martin dipped to 1-1 with the setback, while ETSU has now won its last 13 games over in-state foes. This also marks the first road-opening win by the Bucs since defeating Tennessee Tech to open the 2008-09 season.

The first half was tightly contested as there were eight ties in the opening 11 minutes, but with the score knotted at 20, ETSU mounted a 12-4 run to go ahead, 32-24 when Williamson hit Good for a three with just under six minutes to go before halftime.

However, the Skyhawks closed the half on a run of their own by scoring 18 of the final 25 points to take a 42-39 lead into the break.

Momentum quickly shifted at the start of the second half thanks to the three ball as Good knocked down two and Hodges followed with one of his own over a 1-minute, 23-second span to put ETSU ahead for good, 49-42 at the 16:56 mark.

The Skyhawks never answered and ETSU eventually took a 22-point lead when Isaiah Tisdale (Lexington, Ky.) came away with a steal and hit Hodges in transition for a dunk, making it 92-70 with 1:54 left to play.

Quintin Dove finished with a double-double for UT-Martin as he finished with 25 points and 10 rebounds, while Craig Randall II was 7-of-24 shooting with 17 points.