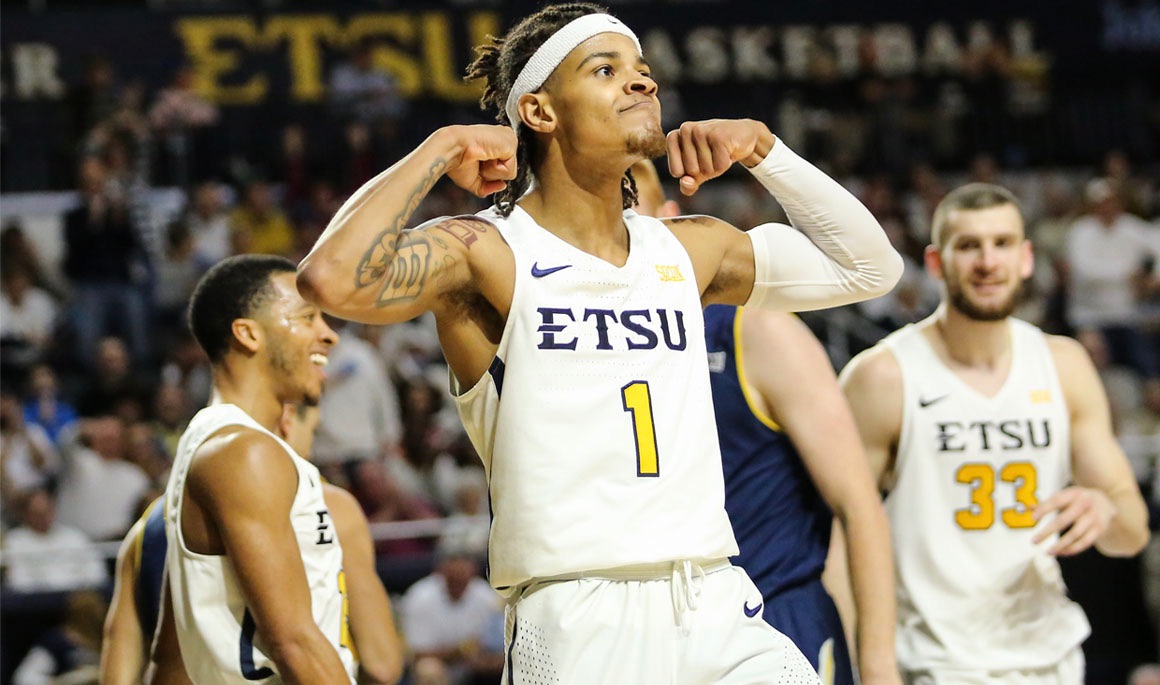 Over 20 years later, the Buccaneer duo provided the late-game heroics as Hodges found Boyd open for a three-pointer to break a tie game in the final 30 seconds en route to lifting ETSU to a 61-58 win over Winthrop on Thursday night inside Freedom Hall.

In a game where the Blue and Gold led for over 34 minutes, the Eagles withstood every punch until Boyd’s game-winner. Winthrop had a chance to tie it in the final seconds, but Micheal Anumba’s three-point shot rimmed out and the Eagles were called for a shot clock violation before getting another attempt to tie the game.

Hodges led the Bucs with 17 points, nine rebounds, two assists and two blocks, while Boyd – who now has two career game-winners inside Freedom Hall – knocked down clutch second-half shots as 10 of his 13 points came in the final 20 minutes. Boyd accounted for three of the Bucs’ seven made threes.

With the win, ETSU improved to 3-0, marking its best start since opening the 1998-99 season with four straight wins. It’s also the 15th time in the 101-year history of the program the Bucs have started 3-0. Meanwhile, Winthrop – fresh off its win at No. 18  Saint Mary’s on Monday  night – moved to 2-2 on the young season.

The game was gritty and displayed strong defensive play as the Bucs were able to force 18 turnovers and turned them into 17 points on the offensive end. The Blue and Gold also held Winthrop to a less than 30 percent clip from beyond the arc as the Eagles went 5-of-17  (29.4%), including a 1-of-9 mark in the first half.

The Bucs led by as many as nine points in the first half and took a 30-23 lead into the break.

ETSU pushed its lead back to nine in the opening seconds of the second half, but with the Bucs ahead 34-25, Winthrop mounted a 10-1 run to pull even at 35 with just under 15 minutes remaining in the contest.

The Bucs were able to regain a seven-point lead on three different possessions – the last being a 50-43 score – following a lay-up by Vonnie Patterson (Louisville, Ky.) at the 7:04 mark.

But the Eagles kept surviving the punches.

Winthrop quickly answered with five unanswered points over a one-minute stretch to make it a two-point game, but again, ETSU pushed its lead back to six when a tip-in by Jeromy Rodriguez (Santiago, Dominican Republic) made it 55-49 with 4:23 showing on the clock.

After the Eagles inched back within a point, Boyd hit Hodges underneath the basket to stop the run, giving ETSU a 58-55 lead with just under two minutes left. A minute later the Eagles tied the game at 58 on a three-pointer by Josh Ferguson, but this time Hodges found Boyd for the bucket and the triple proved to be the dagger as it gave the Blue and Gold the lead for good.

For the game, ETSU shot 42 percent (21-50), while Winthrop posted a 46.3 percent clip (25-54). Both teams struggled at the free throw line with ETSU finishing 12-for-23 and the Eagles made three of their nine attempts.  The Bucs were outrebounded by five, 35-30, but ETSU scored 10 second-chance points off 10 offensive rebounds. Rodriguez tied Hodges with a team-high nine boards.

The Bucs now return to the road as ETSU takes on No. 5 Kansas Tuesday night. Tip-off is  set for 8 p.m. inside Allen Fieldhouse.