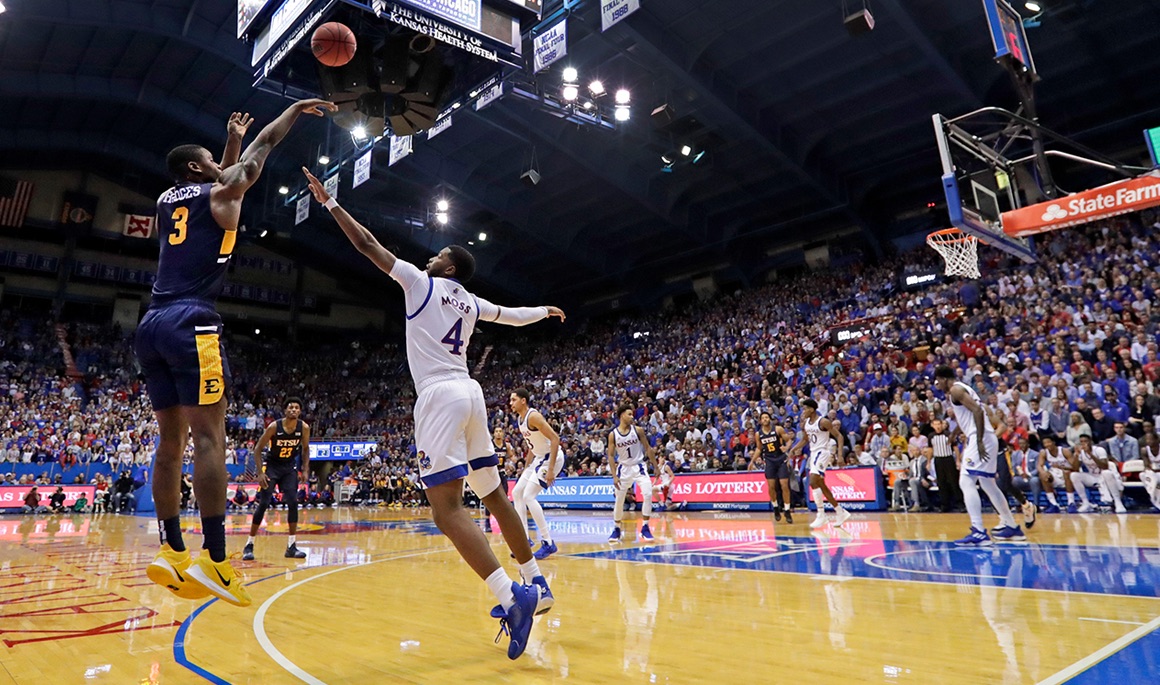 LAWRENCE, Kan. (Nov. 19, 2019) –The ETSU men’s basketball team put a scare into the fourth-ranked team in the country on Tuesday night.

After falling behind by as many as 18 points in the first half, the ETSU men’s basketball team battled back and made it a five-point game with under six minutes remaining. However, the Buccaneers couldn’t complete the comeback as the Jayhawks held on for a 75-63 win in front of 16,300 fans on Tuesday night inside Allen Fieldhouse.

Junior guard Bo Hodges (Nashville, Tenn.) scored a game-high 22 points on 8-of-14 shooting, while adding seven rebounds and three blocks in 36 minutes. Senior center Lucas N’Guessan (De Lier, Netherlands) finished with 11 points and seven rebounds, along with knocking down his first collegiate three-pointer to extend ETSU’s streak of making one triple to 1,005 straight games. Sophomore guard Daivien Williamson (Winston-Salem, N.C.) also scored in double figures as he went 4-of-8 to end with 10 points and dished out four of the Bucs’ 12 assists.

As a team, ETSU was held to 38 percent shooting (23-60), while hitting nine of its 30 three-point attempts – five of which came during the second-half run to pull within 61-56 with 5:55 remaining. The Bucs outrebounded Kansas 33-32, including adding 11 offensive rebounds. Senior post Jeromy Rodriguez (Santiago, Dominican Republic) led the Blue and Gold with 10 boards – the 20th double-digit rebound game of his career. ETSU committed 10 of its 16 turnovers in the first half, leading to 24 Jayhawk points off those miscues. Kansas was also plus-30 in the paint (54-24) and plus-12 in fast break scoring, 21 to 9.

The Bucs, who were playing Kansas for the fourth time in program history and first since Jan. 4, 1996, suffered their first loss of the season as ETSU moved to 3-1. The Jayhawks extended their home winning streak to 24 straight games and improved to 3-1.

ETSU led 5-4 early following a jumper by Hodges two and a half minutes into the game, but then Kansas took over.

Despite the up and down play in the first half, the Bucs flipped the switch in the second.

The three ball helped spark the run as a trey by Williamson with 11:33 remaining snapped nine straight misses from beyond the arc by the Bucs. From there, ETSU made five of its next eight attempts and made it a five-point game after Williamson found Patrick Good (Johnson City, Tenn.) for an open three with 5:55 remaining.

Unfortunately, the Bucs couldn’t inch any closer as Kansas rattled off six straight points to push its lead back into double figures at the 4:22 mark. The Bucs were able to clip the lead back to nine on two different trips down the court, but the Jayhawks ended up scoring 14 of the final 21 points to hold off the Buccaneer comeback.

Kansas was led by Udoka Azubuike’s 21-point, 7-rebound, 4-block effort, while Devon Dotson added 19 points on 6-of-12 shooting. Dotson also totaled six of the Jayhawks’ 19 assists. Dotson made the lone Jayhawk three-pointer on the night as Kansas finished 1-of-14 from beyond the arc.

The Bucs return home to host the Maui Mainland Regional games as ETSU faces Delaware State on Saturday at 2 p.m. Southern Utah and Charleston Southern play in the first game at 11:30 a.m.