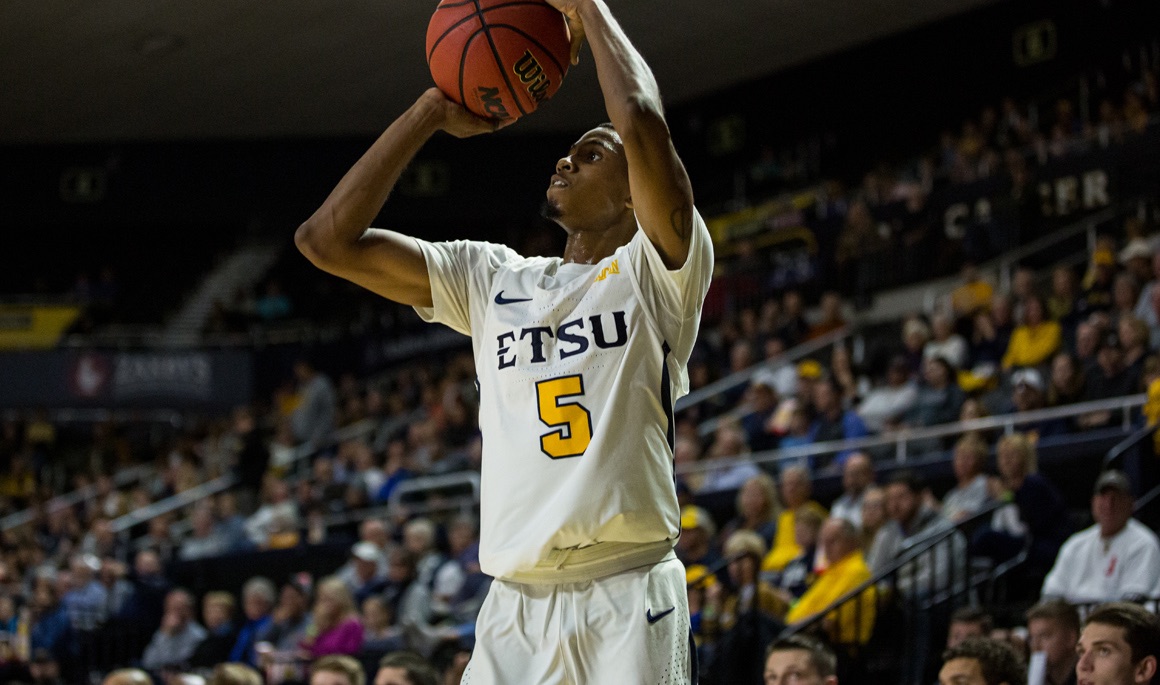 JOHNSON CITY, Tenn. (Nov. 23, 2019) – ETSU quickly took the sting out of the Hornets on Saturday afternoon.

Thanks to a 17-2 run in the opening minutes of the contest and closing the final minutes of the first half on a 13-2 spurt, the Buccaneer men’s basketball team cruised to a 98-66 win over Delaware State inside Freedom Hall in the Maui Invitational mainland game.

As a unit, the Blue and Gold shot 52 percent (31-60) and knocked down 78 percent at the free throw line. ETSU made 28 of its 36 attempts at the charity stripe – including a run of 15 straight makes during the first half. The Bucs also dominated the glass as they outrebounded Delaware State by 19, 47-28, with senior Lucas N’Guessan (De Lier, Netherlands) leading the Bucs with eight rebounds.

Defensively, ETSU held the Hornets to 36 percent shooting (22-61), along with a 31 percent clip from beyond the arc (8-26). The Bucs also registered a season-high 13 steals and scored 21 points off 17 Hornet turnovers.

With the win, ETSU improved to 4-1 on the young season and moved to 54-11 at home in the Coach Forbes era. Delaware State suffered its sixth straight setback to start the season.

After using the 17-2 first-half run to go up by 12 five minutes into the game, the Hornets clipped the deficit back to single digits four times over the next four minutes before the Bucs eventually kept their lead in double figures for the remainder of the contest. ETSU then closed the final two minutes on its 13-2 run to take a 27-point lead into the break, 56-29, marking the most first half points against a Division I opponent since scoring 59 against Mercer on Feb. 28, 2009.

The Bucs shot 52 percent in the opening 20 minutes, while making 20 of their 24 free throw attempts.

In the second half, ETSU pushed its lead to 30 five minutes in and eventually led by 40 when Tisdale hit Joe Hugley (Gaithersburg, Md.) for an open three at the top of the key to make it 86-46 with just over seven minutes remaining.

Ten of the 11 Bucs who played hit the scoring column, while all 11 players grabbed at least one rebound.