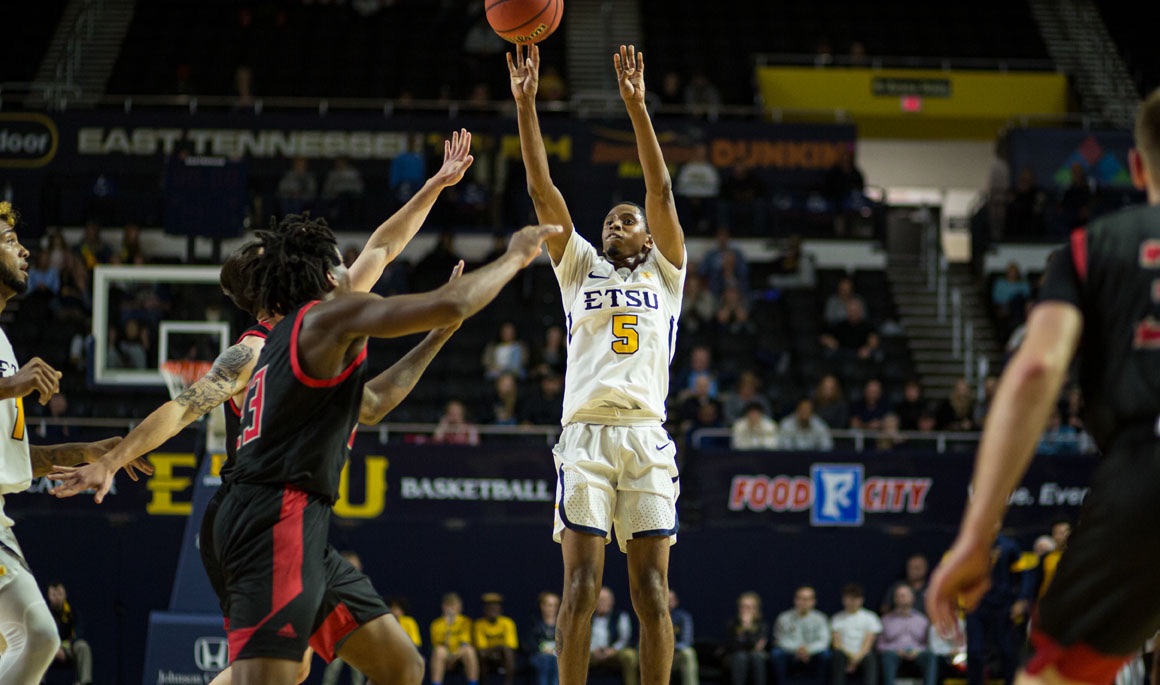 After squandering a 13-point second-half lead and trailing by seven with six and half minutes remaining, Daivien Williamson (Winston-Salem, N.C.) sparked the comeback as ETSU men’s basketball rallied for a 67-63 win inside the Jack Stephens Center.

With the Bucs down 56-49, Williamson converted on a four-point-play, while Patrick Good (Johnson City, Tenn.) answered with a game-tying three on the ensuing possession to pull the Blue and Gold even with 6:07 remaining. Following Little Rock going back ahead on a three-point-play, Williamson stepped up again with another triple – and with the Trojans regaining the lead with four and a half to play – ETSU closed the game on an 8-2 run to secure its 21st true road win since the start of the 2017-18 season.

Williamson scored 14 of his season-high 20 points in the second half, while he also connected on three of his four attempts from beyond the arc in the final 20 minutes. Overall, Williamson was 7-of-13 from the field (5-for-6 from three) and added two assists.

As a team, ETSU shot 45 percent from the field (23-51), however, the Blue and Gold hit 50 percent of their three-point attempts en route to finishing with a season-high 11. The Bucs went 10-of-12 at the free throw line, while Vonnie Patterson (Louisville, Ky.) iced the game by making the front end of a 1-and-1 with 9.2 seconds remaining.

After a nip-and-tuck first half, the Bucs closed the frame strong en route to taking a 31-22 lead into the break.

Six of the Bucs’ 11 made field were from three-point land in the first half, while ETSU limited  the Trojans to 6-of-15 shooting (40 percent). The 22 points were the fewest given up by the Bucs this season against a Division I opponent.

It looked as the Bucs carried momentum into the second half as Lucas N’Guessan (De Lier, Netherlands) and Tisdale made field goals on back-to-back trips, but then ETSU went cold.

However, the Blue and Gold were then held scoreless for the next four minutes and the Trojans took a 50-44 lead at the 8:05 mark. After Little Rock went up seven on three different possessions, the Bucs then buckled down and used Williamson’s clutch shooting and stifling defense to close out the game.

ETSU continues its road swing Wednesday night when the Bucs open conference play at The Citadel. Game time is slated for 7 p.m. inside McAlister Field House.