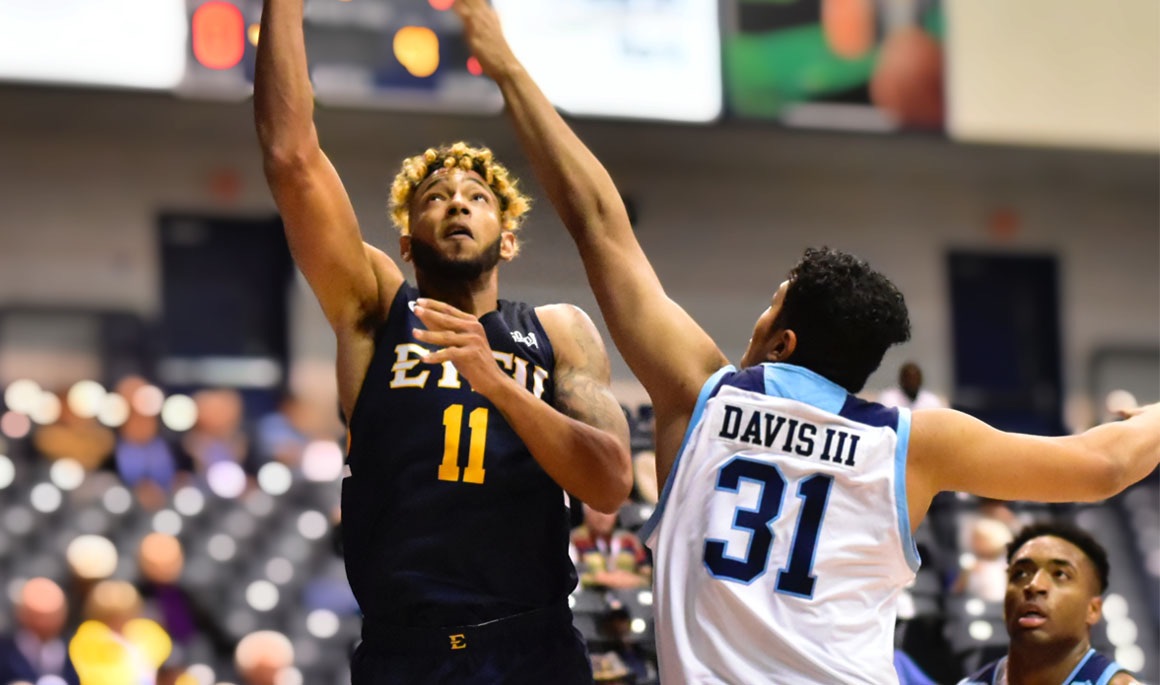 Boyd, Rodriguez have career nights in road win over The Citadel
ETSU at The Citadel | December 04, 2019
Related Links

The Buccaneer duo had a career night in scoring as they combined for 51 points, while five players finished in double figures en route to ETSU capturing the Southern Conference opener. Boyd scored 23 of his career-high 25 points in the first half, while Rodriguez registered 26 points and 16 rebounds for his 17th career double-double. Boyd finished 10-of-19 from the field and accounted for five of the Bucs’ nine made threes, while Rodriguez went 13-of-15, marking the most made field goals by an ETSU player since Kevin Tiggs totaled 15 back on March 4, 2009 against Stetson.

Daivien Williamson (Winston-Salem, N.C.)  – fresh off his team-high 20-point effort last time out at Little Rock – finished with 16 points, while Lucas N’Guessan (De Lier, Netherlands) totaled 11 points (4-of-4 from the field) and six rebounds in 14 minutes off bench. Isaiah Tisdale (Lexington, Ky.) capped off the scorers with 10 points, five rebounds and four assists.

As a team, ETSU outrebounded the Bulldogs by 25 (45-20), while cashing 16 offensive rebounds into 25 second-chance points. The Bucs also tallied 52 points in the paint and held a plus-39 margin in bench scoring, 52-13. Overall, ETSU shot 55 percent from the field, while its 36 made field goals marked a season high. The Bucs also posted a 71 percent clip (15-21) at the free throw line with Williamson going 6-of-6.

The Bulldogs kept things close for the first 13 minutes, but with The Citadel ahead 32-28, ETSU mounted a 19-2 run – including a personal 11-0 spurt by Boyd – to go ahead 47-34 with just over four minutes remaining before the break. Eventually, the Bucs carried a double-digit lead into halftime when Rodriguez’s lay-up in the final seconds made it 54-44.

Following the break, ETSU saw its lead balloon to 21 in the opening 10 minutes when Boyd assisted on a dunk to N’Guessan, making it 75-54. The Bucs again led by 21, 80-59, with 6:14 remaining, but Citadel’s pressure allowed them to chip away at its deficit and pulled within 10 twice before ETSU walked away with the 12-point win in the conference opener.

Kaiden Rice led all scorers with 30 points, while Kaelon Harris added 16 points and six rebounds  in the losing effort.

The Citadel shot 49 percent from the field (31-63) and only turned the ball over nine times.