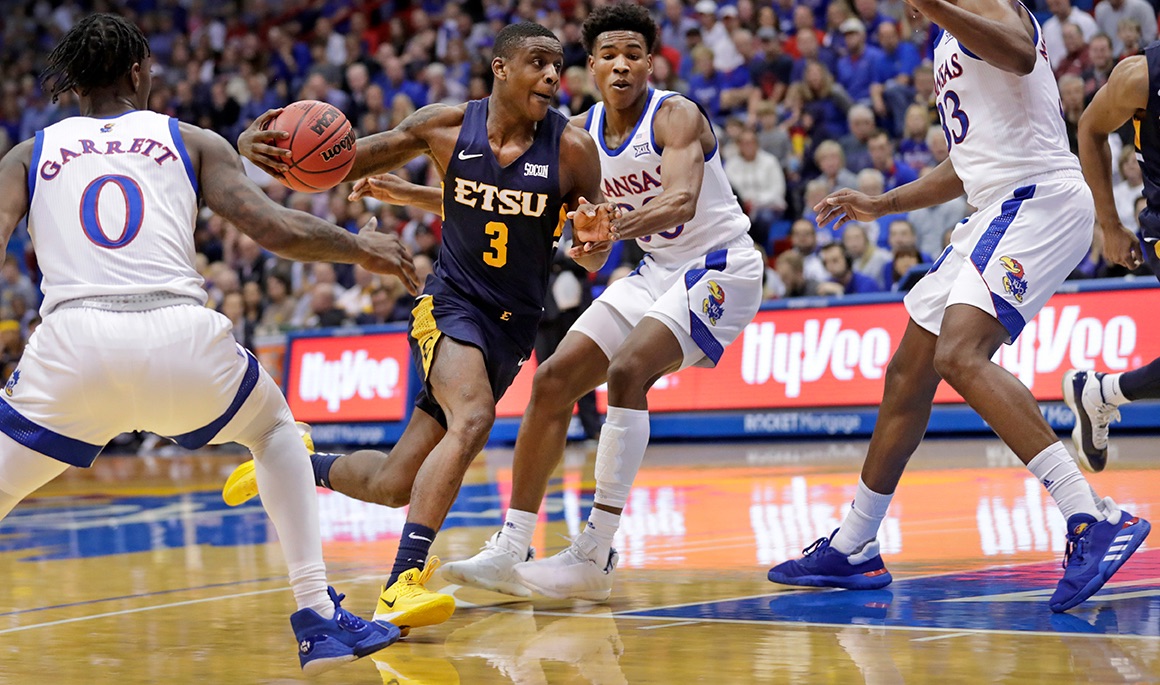 Hodges leads all scorers with 23 points

After winning the first two legs on the three-game swing, the ETSU men’s basketball team had its five-game win streak snapped with a 78-68 setback at North Dakota State on Saturday night inside Scheels Center.

For the game, the Bucs shot 47 percent (24-51) from the field and made six threes, while the Bison went 46 percent (22-48) from the field and knocked down eight threes. The difference maker were free throws and points off turnovers. NDSU was plus-12 at the charity stripe – going 26-of-30  to ETSU’s 14-of-17 mark – while the Bison doubled up the Blue and Gold in points off turnovers, 26-13.

The Bucs saw their five-game win streak come to an end and moved to 8-2, while NDSU – the  defending Summit League champion – improved  to 6-4.

Things couldn’t start any worse than they did for the Bucs as NDSU scored the first eight points and eventually led 14-2 just over five minutes into the contest.

After weathering the storm, ETSU held the Bison scoreless for the next four minutes and used a 12-0 run to pull even at 14 following back-to-back threes by Boyd and Hodges at the 11:45 mark.

However, the Bucs were never able to take the lead and foul trouble set in for the Blue and Gold, as four players picked up two fouls and the Bison capitalized. With NDSU ahead 20-18, the Bison went on a 13-4 run to open an 11-point lead before a three-pointer by Vonnie Patterson  (Louisville, Ky.) stopped the bleeding and made it an eight-point deficit at the break, 33-25.

The Bucs were able to pull within three following a dunk by Boyd four minutes into the second half, but ETSU was unable to build off the monster slam.

Following the dunk, the Bison rattled off seven straight points to go ahead, 47-37. NDSU then extended its lead to 19 with 3:48 remaining – but after the Bucs were only able to inch within 10 – playing from behind caught up with ETSU as NDSU pulled out the win.

The Bison had four players score in double figures with Rocky Kreuser and Tyson Ward leading the way at 17 points each. Ward – who was 9-of-9 at the free throw line – also grabbed nine rebounds, dished out four assists and totaled three steals.