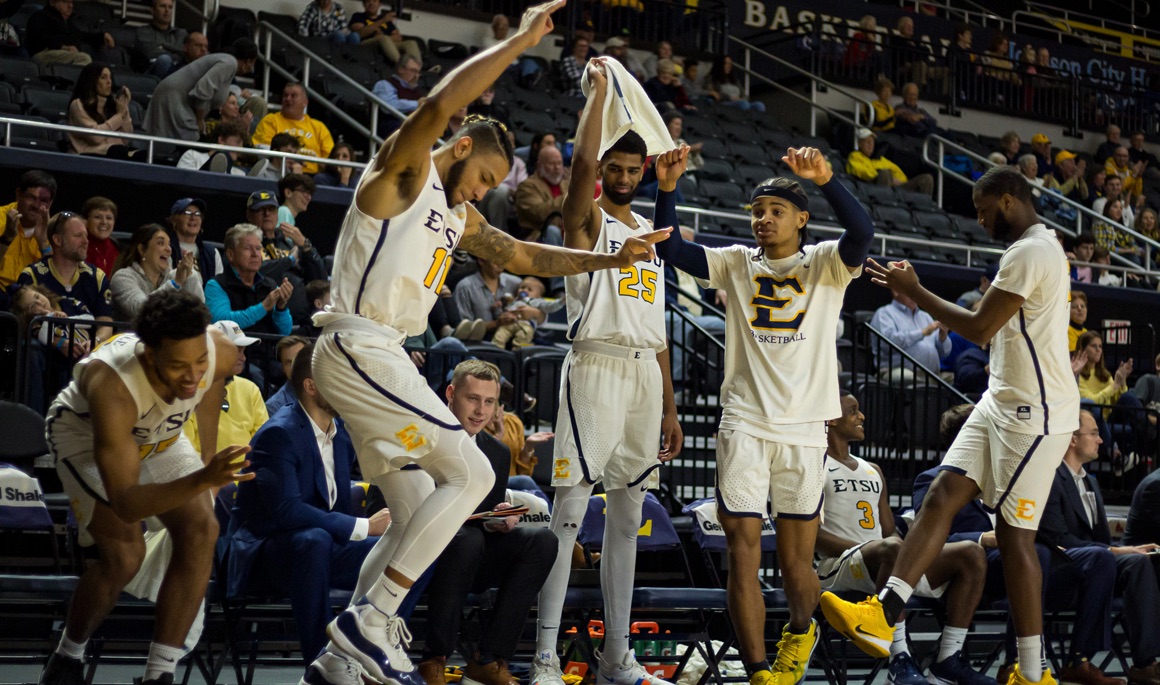 JOHNSON CITY, Tenn. (Dec. 15, 2019) -- Highlighted by a season-high 20 steals and 43 points off turnovers, ETSU men’s basketball made quick work of Milligan as the Bucs cruised to a 97-41 non-conference win on Sunday afternoon inside Freedom Hall.

Sandwiched between the steals and points off turnovers, the Bucs held Milligan scoreless for a stretch of 10 minutes and 35 seconds where ETSU mounted a 31-0 run to put the game away. During that stretch, which spanned the final seven minutes of the first half and opening three minutes of the second, Milligan missed 12 shots and turned the ball over nine times.

Five Buccaneers scored in double figures with senior guard Tray Boyd III (Memphis, Tenn.) leading the charge with a game-high 20 points (7-of-9 shooting) and dished out four assists. Bo Hodges (Nashville, Tenn.) finished with 15 points (7-of-10 shooting), five assists and  four steals, while senior Jeromy Rodriguez (Santiago, Dominican Republic) added 14 points and seven rebounds. The Maryland duo of Joe Hugley (Gaithersburg) and freshman Charlie Weber (Owings) combined for 24 points  on 11-of-13 shooting. Hugley – who had a stretch with seven straight points in the first half – netted a season-best 13, while Weber totaled 11 points and knocked down three of the Bucs’ 10 threes.

As a team, the Bucs assisted on 22 of their season-high tying 36 made field goals en route to shooting 53 percent from the field. ETSU connected on 10 of its 25 three-point attempts and shot 71 percent at the free throw line (15-21). Hodges and Patrick Good (Johnson City, Tenn.) both dished out five assists and registered four steals, while senior Isaiah Tisdale (Lexington, Ky.) led the team with a career-high five swipes.

Milligan scored the first basket of the contest and pulled even at 6-6 in the first three-plus minutes, but from there Blue and Gold took over.

ETSU used a 14-0 run to go ahead 20-6 following a steal by Octavion Corley (Reno, Nev.), which led to one of four three-pointers from Boyd at the 14:24  mark. After Milligan stopped the bleeding with a lay-up, the Bucs then went on a three-minute stretch where they made seven straight field goals – including Hugley’s personal 7-0 run – to make it a 24-point game, 36-12.

The Buccaneer defense continued to flex their muscle as they held Milligan scoreless for the final seven minutes and 16 seconds of the half and finished on a 17-0 surge to take a 53-17  lead into the break. Six different ETSU players scored during the run, while the Buffs were 0-for-10 from the field and turned the ball over five times.

Momentum carried over into the second half as the run finally grew to 31-0 as the Buffs were held scoreless for the opening three minutes and 19 seconds, which saw the Bucs’ lead balloon to 50, 67-17.

Milligan finally scored its first basket of the second half at the 16:41 mark, while ETSU eventually took its largest lead of the night when Daivien Williamson (Winston-Salem, N.C.) hit Weber for a three to make  it 91-33 with just under five minutes left to play.

Eleven different Bucs reached the scoring column in the win, while 11 players also recorded a  rebound.

The Bucs will play their final road game in 2019 on Wednesday night when ETSU heads to Baton Rouge to take on SEC foe LSU. Game time is  set for 7 p.m. EST inside the Maravich Center.