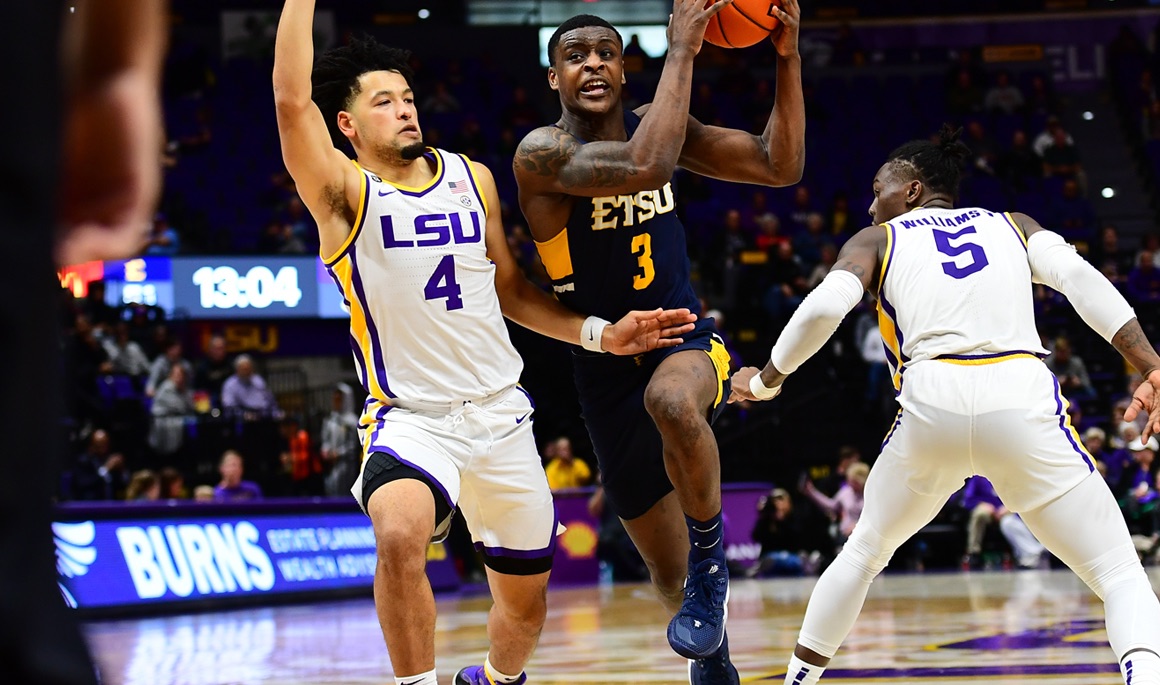 Playing LSU for the first time in program history, the Buccaneers put on a clinic as ETSU rolled to a 74-63 win over the Tigers on Wednesday night inside the Maravich Center.

The Bucs, who led by as many as 23 points, played tough for the entire 40 minutes to hand LSU just its fifth non-conference home loss since 2012-13. Three players scored in double figures with Patrick Good (Johnson City, Tenn.) leading the way with a game-high 19 points and accounting for five of the Bucs’ eight made threes.

With the win, ETSU – the preseason Southern Conference favorite – improved to 10-2, while it marked the Bucs’ 17th all-time win over a Southeastern Conference opponent. In addition, the win was ETSU’s first over a Power-5 program since defeating Mississippi State 67-65 on Dec. 14, 2016. LSU suffered its first home loss of the season and moved to 7-3, while it was the Tigers’ first non-conference home loss since Dec. 16, 2017 against Stephen F. Austin.

The first 10 minutes were tightly contested as neither team led by more than five points, but a posterizing dunk by Hodges and key three-point shooting by Good ignited a Buccaneer surge.

The Bucs closed the final seven minutes and 40 seconds on a 22-9 run en route to leading, 38-29 at the half. Following the dunk by Hodges, Good followed with three consecutive three-pointers to put ETSU on top for the remainder of the night, 25-22.

Both teams traded baskets to start the second half, but a quick 9-0 run made it a 46-33 score following a dunk by Rodriguez, forcing LSU to call timeout at the 15:37 mark.

Four minutes later ETSU’s lead hit 20, 57-37, when Rodriguez dished off his fifth assist of the night for a Lucas N’Guessan (De Lier, Netherlands) slam with just over 10 minutes left. The Blue and Gold took their largest lead of the game when a lay-up by Tray Boyd III (Memphis, Tenn.) put ETSU ahead, 68-45 with 6:21 remaining.

LSU pulled within 10 in the final minute but the Buccaneer lead never dipped below double figures.

The Tigers were led by Emmitt Williams’ 16-point, 11-rebund performance, while Skylar Mays finished with 13.