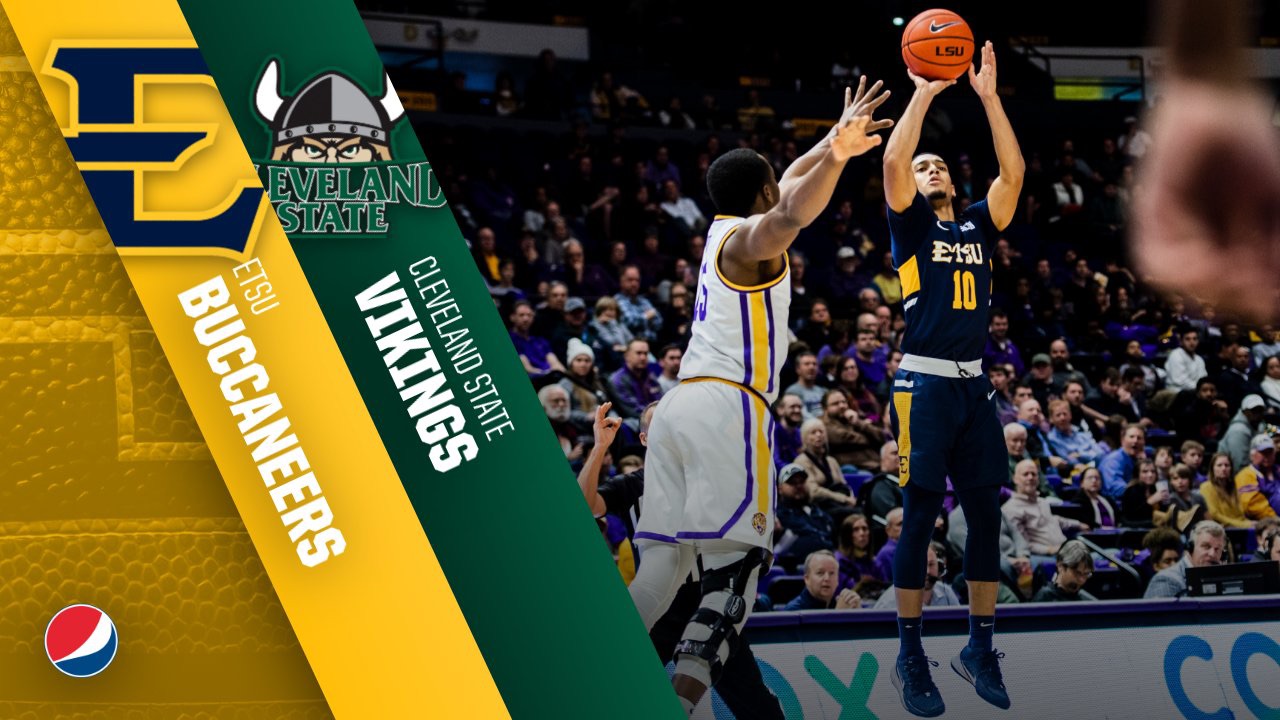 JOHNSON CITY, Tenn. (Dec. 20, 2019) -- Fresh off its win over LSU, the ETSU men’s basketball team will look to head into the holiday break with another win on its ledger when the Buccaneers host Horizon League foe Cleveland State on Saturday afternoon. Tip-off is set for 4 p.m. inside Freedom Hall.

Saturday marks the Bucs’ annual Holiday Hoops game as the first 500 fans will receive a limited edition ETSU ornament, while Santa will be inside Freedom Hall for free photo ops … Fans are also encouraged to wear their festive holiday apparel.

Saturday’s game will be streamed live on ESPN3 with Mike Gallagher and Bruce Tranbarger on the call; CLICK HERE FOR LIVE VIDEO

“Voice of the Bucs”Jay Sandos will have the radio call on WXSM-AM 640 beginning with the Atmos Energy Pregame Show at 3:30 p.m.; CLICK HERE FOR LIVE AUDIO

In their six home games this season, ETSU is holding the opposition to 57.0 points and limiting them to a 26.2 shooting percentage from beyond the arc (32-122) … The Bucs also have a plus-4.7 turnover margin as the Blue and Gold are only averaging 12.2 turnovers with the opposition turning the ball over 16.8 times per game … ETSU is also averaging 5.8 blocks per game … Individually, Tray Boyd III is averaging 16.0 points, while shooting 53 percent  from the field (32-61), 49 percent from beyond the arc (19-39) and is 13-of-13 at the free throw line … Bo Hodges is posting 14.5 points per game in the six home contests this season, while adding 5.3 rebounds and donning a 60 percent shooting clip (35-58) … Hodges and Boyd make up 38 percent of the Bucs’ scoring at home as they have accounted for 183 of ETSU’s 483 points.

When it comes to the Bucs’ balanced scoring it’s no surprise the Blue and Gold enjoy sharing the ball … Three players rank in the top 10 among SoCon leaders in assists with Isaiah Tisdale ranking eighth (2.9), Bo Hodges is ninth (2.9) and Daivien Williamson ranks 10th (2.7) … The trio have accounted for 100 of ETSU’s 175 assists on the season.

BUCS IN THE NATIONAL RANKS

Cleveland State has dropped its last four games as the Vikings are coming off a 72-58 setback against DePaul on Wednesday night … Cleveland State enters Saturday’s with an overall record of 4-8.

The Vikings are led by junior forward and DePaul transfer Algevon Eichelberger as he’s averaging 11.9 points per game and 7.7 rebounds, while Tre Gomillion is posting 10.3 points and shooting 51 percent (44-86) from the field.

Cleveland State is in search of its first road win as they have dropped the first five away from home … The road losses include at Minnesota, Missouri State, South Carolina, Kent State and Bowling Green.

Cleveland State is led by first-year head coach Dennis Gates as he took over the program in July.

Saturday marks the first ever meeting between ETSU and Cleveland State.