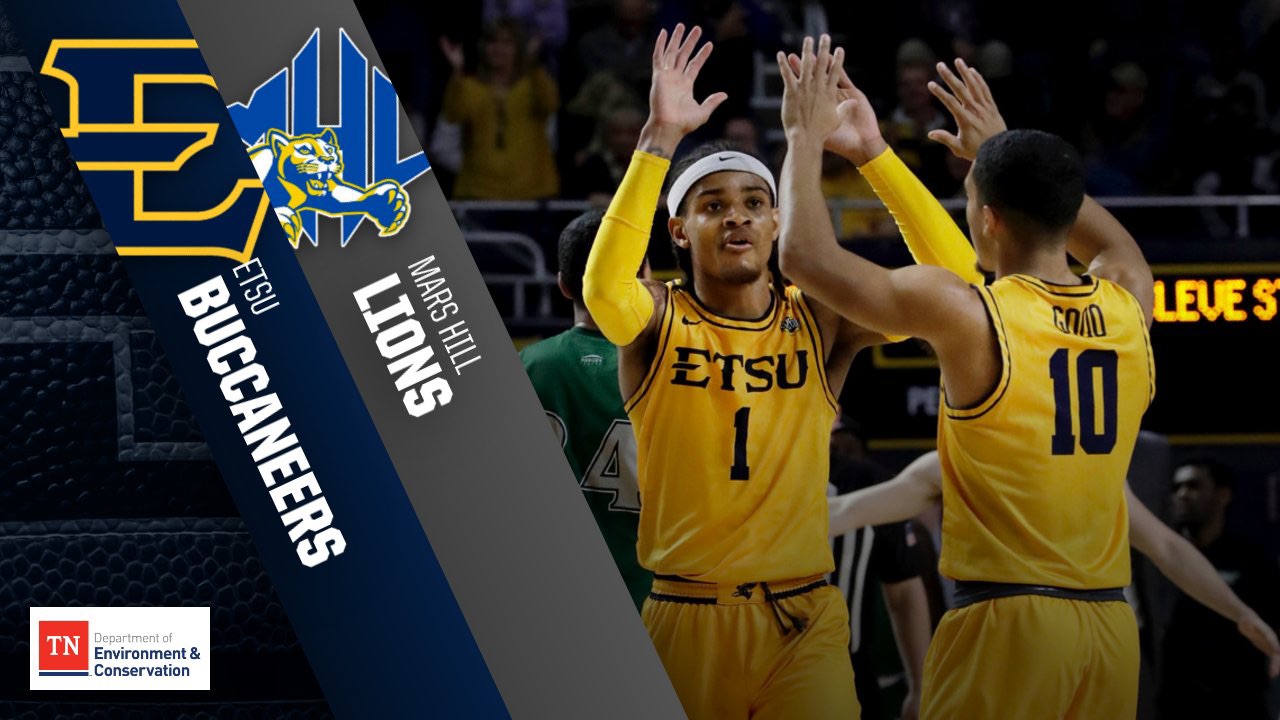 JOHNSON CITY, Tenn. (Dec. 28, 2019) -- After enjoying some time off for the holiday, the ETSU men’s basketball team makes its final tune-up before resuming Southern Conference play as the Buccaneers host Mars Hill on Sunday afternoon inside Freedom Hall. Tip-off is set for 2 p.m.

Sunday’s game will be streamed live on ESPN3 with Mike Gallagher and Bruce Tranbarger on the call; CLICK HERE FOR LIVE VIDEO

“Voice of the Bucs” Jay Sandos will have the radio call on WXSM-AM 640 beginning with the Atmos Energy Pregame Show at 1:30 p.m.; CLICK HERE FOR LIVE AUDIO

Defensively, the Bucs limited Cleveland State to 37 percent shooting (20-54) and held the Vikings to one made three-pointer on eight attempts, marking the second time this season ETSU limited an opponent to one made three (at Kansas). The Vikings turned the ball over 20 times with the Bucs cashing those miscues into 19 points.

MORE ON THE CLEVELAND STATE GAME

ETSU, whose average margin of victory at home is just under 25 points per game, has led in 265 of the possible 280 minutes this season (95%).

For the second straight season and sixth time in program history, the Blue and Gold have won 10 non-conference games … The Bucs have reached the NCAA Tournament in five of the six seasons when accomplishing the feat.

For the first time this season and third of his career, ETSU redshirt senior forward Jeromy Rodriguez was named Southern Conference Player of the Week, announced the league office on Tuesday… Rodriguez, who averaged 13 points, nine rebounds and 3.5 assists, helped guide the Buccaneers to a road win at LSU last Wednesday and followed that up with a 25-point win over Cleveland State on Saturday... For the week, the Buccaneer forward shot 63 percent (10-16) from the field and 86 percent (6-7) at the free throw line.

In their seven home games this season, ETSU is holding the opposition to 56.7 points and limiting them to a 25.4 shooting percentage from beyond the arc (33-130) … The Bucs also have a plus-5.4 turnover margin as the Blue and Gold are only averaging 11.9 turnovers with the opposition turning the ball over 17.3 times per game … ETSU is also averaging 5.7 blocks per game … Individually, Tray Boyd III is averaging 16.0 points, while shooting 50 percent  from the field (37-74), 44 percent from beyond the arc (19-43) and is 19-of-20 at the free throw line … Bo Hodges is posting 13.6 points per game in the seven home contests this season, while adding 5.1 rebounds and donning a 59 percent shooting clip (38-65) … Hodges and Boyd make up 37 percent of the Bucs’ scoring at home as they have accounted for 207 of ETSU’s 563 points.

The Bucs never trailed in their game versus Southern Utah on Nov. 24, while ETSU led for 76 minutes and 46 seconds of the possible 80 minutes in the two games that weekend in the Maui Invitational Mainland  …  In the Bucs’ seven home games this season, ETSU has led in 265 minutes of the possible 280 minutes, which equates to 95% of the game.

When it comes to the Bucs’ balanced scoring it’s no surprise the Blue and Gold enjoy sharing the ball … Three players rank in the top 10 among SoCon leaders in assists as Isaiah Tisdale, Bo Hodges and Daivien Williamson are all tied for eighth at 2.8 … The trio have accounted for 108 of ETSU’s 191 assists on the season.

Mars Hill has won four of its last five games and enters Sunday’s contest with an overall record of 6-5.

The Lions are averaging 89.3 points per game and have scored at least 90 points six times this season.

Brooks is one of four players scoring in double figures with Austin Gilyard (16.9), Jamal Bryant (14.4) and Javonte Cook (13.5) being the other three players.

The teams have split the previous eight meetings with ETSU winning the last matchup, 100-57 on Nov. 25, 2003, marking the first game played between the two programs since the 1928-29 season.