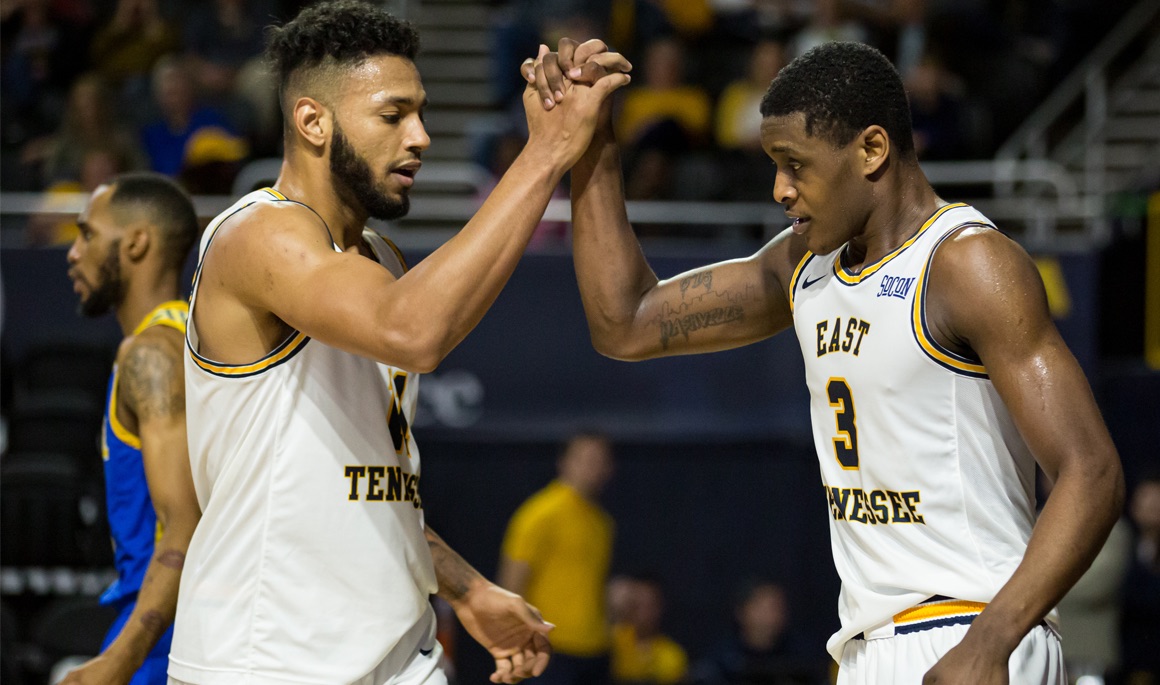 JOHNSON CITY, Tenn. (Dec. 29, 2019) -- Fast starts have become the norm for the Buccaneers inside Freedom Hall.

For the second straight game, ETSU scored the first 11 points and never looked back as the Bucs cruised to a record-setting 69-point win over Mars Hill, 117-48, on Sunday afternoon in their non-conference finale.

The 69-point win marked the largest margin of victory in program history – besting the 68-point rout of Warren Wilson back on Dec. 5, 2000.

For the game, ETSU made a season-high 44 field goals en route to shooting 56 percent from the field, while also knocking down 12 threes. The Bucs doubled up Mars Hill on the glass, 56-28, which also set a season-best. ETSU’s bench also outscored the Lions as the Blue and Gold totaled 54, while the Bucs’ defense forced 26 turnovers and scored 39 points off those miscues.

ETSU has now won four straight games to improve to 12-2, while the 117 points are the most scored by the Bucs under head coach Steve Forbes. Overall, the Bucs have reached the century mark eight times under Forbes, while ETSU was eight points shy of tying the single-game record of 125, set against Newberry in the 1989 season opener. For the game, the Bucs went 17-of-32 at the free throw line.

After scoring the first 11 points in the opening three minutes, the Bucs then connected on 15 unanswered points to go up 40-15 following a lay-up by Rodriguez at the 6:40 mark. Overall, the run extended to 29-4, after Hodges’ bucket put ETSU ahead 54-19 with two minutes remaining in the first half. The Bucs eventually carried a 35-point lead into the break, 61-26, marking the most first-half points scored since netting 65 against Mercer on Feb. 24, 2007.

The fun carried over to the second half.

ETSU scored the first seven points of the second half to push its lead to 42, while Charlie Weber’s (Owings, Md.) fast-break dunk put the Bucs up 50, 82-32, with just under 14 minutes remaining. Four minutes later Weber assisted on Joe Hugley’s (Gaithersburg, Md.) three-pointer to push the margin into the 60s, while the Bucs’ largest lead hit 72 when Octavion Corley (Reno, Nev.) laid one in, making it 112-40 with 5:20 remaining. ETSU was flirting for the single-game scoring record but both teams were held scoreless for two minutes and the Bucs walked away with the 69-point final.

The Lions were led by Jamal Bryant’s 10 points.