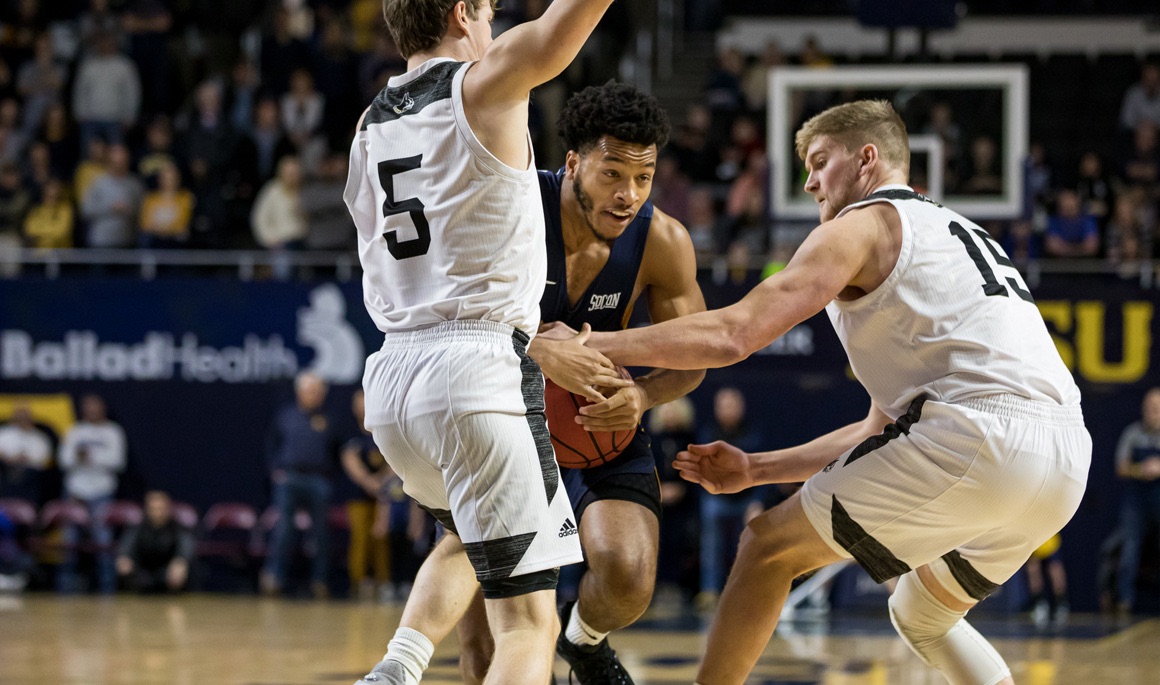 Tisdale gets key steal to seal win in closing seconds

JOHNSON CITY, Tenn. (Jan. 1, 2020) -- In a game where points were at a premium, it’s no surprise a defensive stop sealed a Buccaneer win.

After junior guard Patrick Good (Johnson City, Tenn.) missed the front end of a one-and-one with 13 seconds remaining, senior Isaiah Tisdale (Lexington, Ky.) picked up his teammate when he forced a steal from Wofford’s Tray Hollowell in the closing seconds to secure ETSU a 49-48 win over the Terriers in front of 5,274 fans on Wednesday evening inside Freedom Hall.

The teams, who combined to go 1-of-17 from the field in the first eight and a half minutes, saw the Blue and Gold record their first win when scoring under 50 points since a 49-44 victory at Northern Kentucky on Jan. 7, 2013.

Both teams made 18 field goals, while Wofford was plus-one in three-pointers made (6-5) and ETSU was plus-two in free throws (8-6). The Bucs also out-shot the best free throw team in the conference and held the Terriers’ two leading scorers – Storm Murphy and Nathan Hoover – to eight points on 3-of-22 shooting. Murphy entered the game averaging 14.8 points and finished with six on 2-of-11 from the field, while Hoover totaled two points on 1-of-11 shooting. Hoover was averaging 13.6 points per contest.

The win snapped the Bucs’ four-game losing streak to Wofford as ETSU improved to 13-2, 2-0. The Terriers, who went undefeated in league play a year ago en route  to claiming the SoCon championship, dipped to 8-6, 0-1. The loss was Wofford’s first in SoCon play since Feb. 25, 2018 when the Terriers fell to Mercer, 69-68.

Neither team made a field goal in the opening three-plus minutes until Tray Boyd III (Memphis, Tenn.) connected on his only triple to give ETSU an early 5-2 lead. The score held for nearly the next five minutes until Daivien Williamson (Winston-Salem, N.C.) stopped the drought with a bucket in the paint at the 11:25 mark.

Wofford then connected on its first field goal of the night on its ensuing possession, but after the Terriers pulled even at 14, the Bucs scored seven unanswered to go ahead 21-14 with just over a minute remaining in the half. Wofford netted the final four points to make it 21-18 at intermission.

The Bucs held Wofford to 22 percent shooting (5-23) and 20 percent from beyond the arc (2-10) in the first half. Meanwhile, the Terriers’ starting five was held to zero points and missed 14 shots. ETSU made eight of its 23 attempts in the half and knocked down just one of 11 attempts from beyond the arc. Tisdale and Bo Hodges (Nashville, Tenn.) combined for 10 of the Bucs’ 21 points.

ETSU stormed out of the gates on a 9-0 run to start second half and took its largest lead of the game when Hodges found Rodriguez for a fast-break lay-up, making it 30-18 with 16:38 left to play.

Despite holding a pair of 12-point leads following the spurt and leading by 11 with 11:21 left, the Bucs couldn’t put away the defending champs with ease.

With ETSU ahead 38-27, Wofford scored the next 10 points to pull within one; however, like they do at home, the Buccaneers never relinquished the lead. Good capped off a 7-2 spurt by hitting his third three of the game at the 4:38 mark to extend ETSU’s lead to 45-39, but again, Wofford kept clawing back.

The Terriers cut the deficit back to one on a three by Murphy with just over three minutes remaining, while Tisdale fed Good for another triple to stop the momentum. After Wofford responded with a bucket, Rodriguez came away with a key offensive rebound with 1:08 left to play, which led to Tisdale eventually being fouled driving to the basket. The senior guard made one of his two attempts with 49 tickets left on the clock to make it a 49-46 score.

Both teams then turned the ball over, giving Wofford a chance to pull within one – and after Good was fouled and missed the front end of the one-and-one – the Terriers grabbed the board for a chance to pull off the win. However, Tisdale locked in on Hollowell and forced his third steal of the night to secure the Buccaneer victory.

ETSU hits the road to take on Furman Saturday afternoon at 4 p.m. inside Timmons Arena.