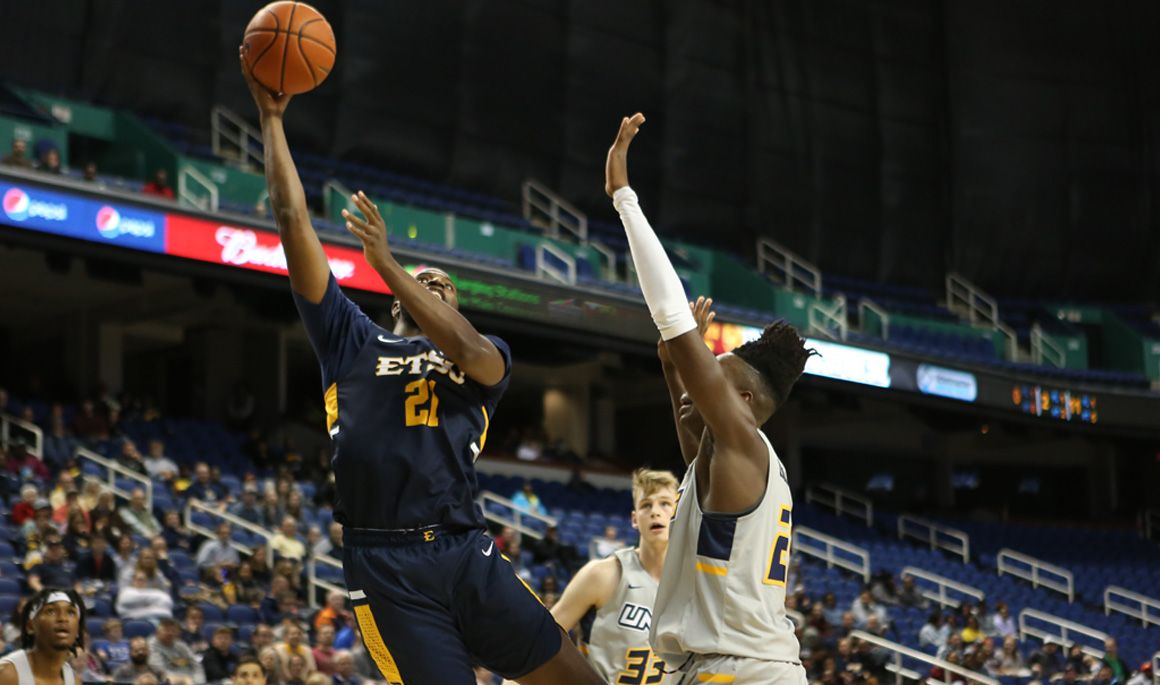 Wednesday night’s first meeting of the season did not disappoint.

The game was in the balance in the final minute as Patrick Good (Johnson City, Tenn.) made one of his two free throw attempts to put ETSU ahead by one with 38 seconds to play.

However, things quickly escalated on the Spartans’ ensuing possession.

UNCG head coach Wes Miller slammed his clipboard on the court, resulting in a technical foul. The tension continued to rise after Tray Boyd III (Memphis, Tenn.) made one of the two free throw attempts as Miller collected his second technical, which forced him to be ejected from the game. Good then stepped to the charity stripe to knock down a pair of free throws, extending ETSU’s lead to four, 61-57, still with 23 seconds left. The Bucs made three of their final four free throws in the closing seconds to cap off the seven-point comeback win.

Three Bucs scored in double figures with Joe Hugley (Gaithersburg, Md.) finishing with 14 points and nine rebounds – both marking season highs. Bo Hodges (Nashville, Tenn.), who collected two fouls in the first four minutes, scored 11 of his 13 points in the second half, while also adding six rebounds and four steals. Boyd collected two of the Bucs’ four made threes to net 11 points.

For the game, the Bucs shot 37 percent (17-46) and went 4-of-17 from three (24 percent); however, ETSU got things done at the free throw line. The Blue and Gold shot 79 percent (26-33), while making seven of their last 10 free throws in the final minute. Hodges made all four attempts, Tisdale – who scored eight points and dished out four assists – went 6-of-8, and Good knocked down five of his six to end with nine points. Boyd and Lucas N’Guessan (De Lier, Netherlands) both made three of their four attempts. Despite not having the services of its top rebounder Jeromy Rodriguez (Santiago, Dominican Republic), ETSU still finished plus-9 on the boards, 38-29. The Bucs scored 15 second-chance points on 11 offensive rebounds.

With the win, ETSU improved to 14-3, 3-1, while it snapped a four-game losing skid to the Spartans and marked the Bucs’ first victory in Greensboro for the first time since Feb. 6, 2016. UNCG, picked second behind ETSU in the preseason rankings, dipped to 12-5, 2-2.

Prior to the late fireworks, both teams got off to a sluggish start as ETSU led 8-3 nine minutes into the game.

The Spartans then found their stroke as they mounted a 16-0 run over a four-and-a-half-minute stretch to go ahead, 19-8 at the 6:22 mark.

Charlie Weber (Owings, Md.) stopped the bleeding with a lay-up with less than six minutes to go, while ETSU eventually posted a 9-3 run to pull within five, but another scoring drought gave the Spartans momentum right before the break. With the Bucs down 22-17, UNCG scored seven unanswered to take its largest lead of the night, 29-17, but Hugley took over by scoring six straight en route to making it an eight-point deficit, 31-23.

Following halftime, ETSU came out of the locker room on a mission and quickly tied the game at 33, thanks to a Hodges three, capping off a 16-4 run at the 15:35 mark.

UNCG then scored the next five points and continued to lead until Boyd hit a three-pointer with 9:22 left, making it a 43-41 score. The Bucs eventually pushed it to four, 53-49, following a pair of free throws from N’Guessan, but the Spartans answered with their first three of the half to cut the deficit to one with just over four minutes to go. UNCG regained the lead, 57-55, on pair of free throws by Malik Massey at the 2:33 mark, but those were the final points by the Spartans.

ETSU scored the final nine points as Hugley tied it at 57 on a hook shot in the paint with 1:22 remaining, while the Bucs sealed it at the free throw line after the technical fouls.

Miller led all scorers with 24 points on 10-of-20 shooting, while James Dickey finished with 12  points and eight rebounds.