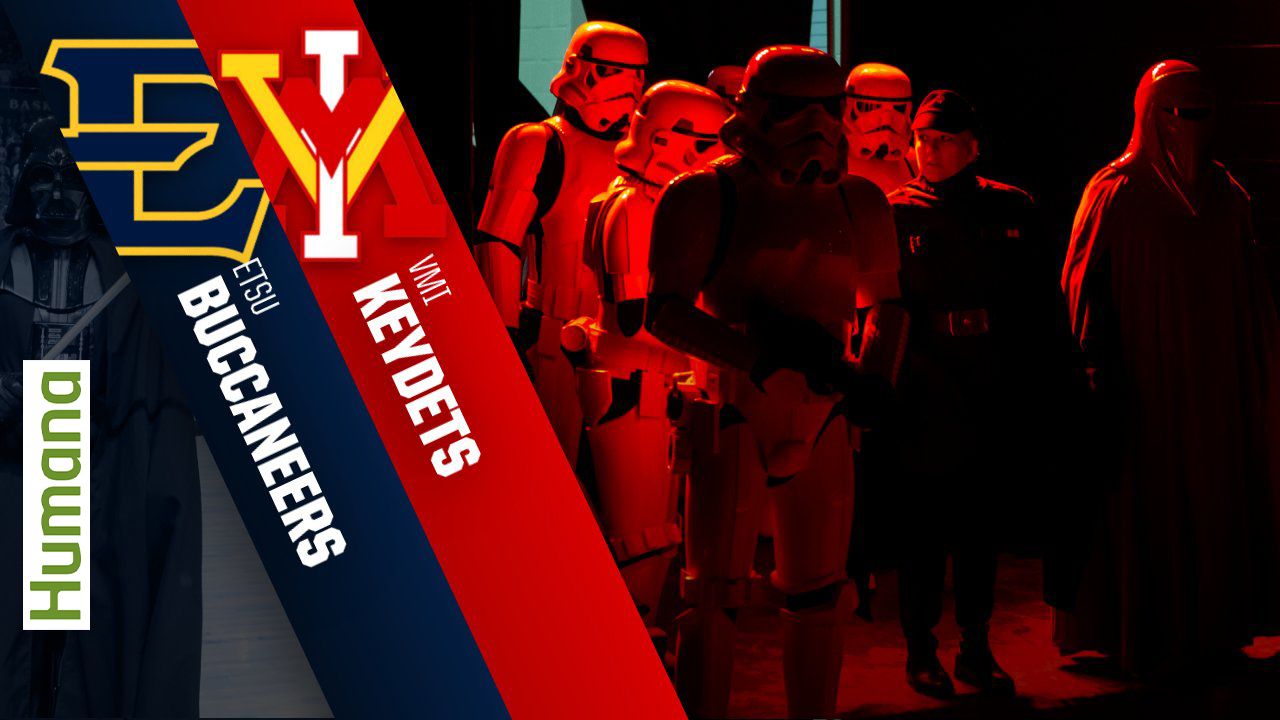 Game to be televised locally on ABC Tri-Cities

ETSU Athletics has built a partnership with Lucasfilm and the Canon Character Group – the 501st Legion – to support a philanthropy within the Tri-Cities. This year, Lucasfilm and ETSU have teamed with Children Exceeding Expectations (CEE), and they have been invited to Saturday’s game.

CEE is a program of the Junior League of Kingsport, a 501(c)(3) non-profit organization. It is a free school exclusively for kids ages 3-12 with cancer and immune deficiency disorders.

To help raise money for CEE, there will be a silent auction during Saturday’s game where items such as exclusive ETSU Nike merchandise, handcrafted ETSU cornhole boards, autographed memorabilia from former ETSU basketball standout and current Harlem Globetrotter AJ Merriweather, and other priceless ETSU items and experiences will be present to bid on. Two auction sites will be set up inside Freedom Hall – one located inside the Courtside Club and one adjacent the main entrance of the arena inside the concourse. All of the money raised in the auction will be donated to CEE.

Fans are encouraged to dress up as their favorite Star Wars character on Saturday as over 30 members of the 501st Legion will be in costume inside Freedom Hall. Following the game, the Star Wars characters will be available for a postgame photo session on the court.

Saturday’s game will be televised locally on ABC Tri-Cities as well as streamed live on ESPN3 with Pete Yanity and Mark Matheny on the call; CLICK HERE FOR LIVE VIDEO

“Voice of the Bucs” Jay Sandos will have the radio call on WXSM-AM 640 beginning with the Atmos Energy Pregame Show at 3:30 p.m.; CLICK HERE FOR LIVE AUDIO

Wednesday night’s first meeting of the season did not disappoint.

The game was in the balance in the final minute as Patrick Good (Johnson City, Tenn.) made one of his two free throw attempts to put ETSU ahead by one with 38 seconds to play.

However, things quickly escalated on the Spartans’ ensuing possession.

UNCG head coach Wes Miller slammed his clipboard on the court, resulting in a technical foul. The tension continued to rise after Tray Boyd III (Memphis, Tenn.) made one of the two free throw attempts as Miller collected his second technical, which forced him to be ejected from the game. Good then stepped to the charity stripe to knock down a pair of free throws, extending ETSU’s lead to four, 61-57, still with 23 seconds left. The Bucs made three of their final four free throws in the closing seconds to cap off the seven-point comeback win.

Three Bucs scored in double figures with Joe Hugley (Gaithersburg, Md.) finishing with 14 points and nine rebounds – both marking season highs. Bo Hodges (Nashville, Tenn.), who collected two fouls in the first four minutes, scored 11 of his 13 points in the second half, while also adding six rebounds and four steals. Boyd collected two of the Bucs’ four made threes to net 11 points.

For the game, the Bucs shot 37 percent (17-46) and went 4-of-17 from three (24 percent); however, ETSU got things done at the free throw line. The Blue and Gold shot 79 percent (26-33), while making seven of their last 10 free throws in the final minute. Hodges made all four attempts, Tisdale – who scored eight points and dished out four assists – went 6-of-8, and Good knocked down five of his six to end with nine points. Boyd and Lucas N’Guessan (De Lier, Netherlands) both made three of their four attempts. Despite not having the services of its top rebounder Jeromy Rodriguez (Santiago, Dominican Republic), ETSU still finished plus-9 on the boards, 38-29. The Bucs scored 15 second-chance points on 11 offensive rebounds.

With the win, ETSU improved to 14-3, 3-1, while it snapped a four-game losing skid to the Spartans and marked the Bucs’ first victory in Greensboro for the first time since Feb. 6, 2016. UNCG, picked second behind ETSU in the preseason rankings, dipped to 12-5, 2-2.

Sitting at 14-3 on the season, ETSU is off to its best start since the 1990-91 season when ETSU opened 21-2 en route to claiming the SoCon title and advancing to the  NCAA Tournament.

The Bucs have led wire-to-wire in four of their nine home games, while ETSU’s largest home deficit this season was three points when Delaware State led 3-0, 30 seconds into the contest ... The Bucs have never trailed in the second half at home this season as they were  tied at 35 and 58 vs. Winthrop, while the latest ETSU has trailed is the 11:51 mark of the first half vs. Appalachian State (12-11) ... Overall, ETSU has led in 339 of the 360 possible minutes at home (94%).

The Bucs have had a different leading scorer in seven games this season … Against Winthrop, Kansas and NDSU, junior guard Bo Hodges led the Blue and Gold with 17, 22 and 23-point performances … Tray Boyd III led ETSU with 20 points in the season-opening win over Newberry, while leading the Bucs with 22 in the win over Appalachian State … Patrick Good poured in 24 points in the road win at UT-Martin on Nov. 9 … Daivien Williamson scored 17 points vs. Delaware State and 20 at Little Rock, and Lucas N’Guessan netted a career-high 18 against Southern Utah … Jeromy Rodriguez paced the Blue and Gold with a career-high 26-point effort at The Citadel on Dec. 5 … Most recently, Joe Hulgey led the Bucs with 14 points at UNCG … As a team, ETSU has three players averaging double figures scoring with seven players averaging at least seven points per contest … Only three teams have eight players averaging over seven points per game (Ohio State, Grambling and Long Island).

When it comes to the Bucs’ balanced scoring it’s no surprise the Blue and Gold enjoy sharing the ball … Three players rank in the top 15 among SoCon leaders in assists as Isaiah Tisdale ranks seventh (3.1), while Bo Hodges is 11th (2.5) and Daivien Williamson is 13th at 2.4 … The trio have accounted for 137 of ETSU’s 241 assists on the season.

The Bucs are also balanced on the boards as seven different players have led the team in rebounding this season – most-recently Joe Hugley grabbing nine at UNCG … Vonnie Patterson pulled down a season-high 14 vs. Appalachian State … Patrick Good led ETSU with five in the season opener vs. Newberry,  Jeromy Rodriguez had 10 in the win at UT-Martin and at Kansas, Bo Hodges had nine vs. Winthrop, while Lucas N’Guessan had eight vs. Delaware State and Isaiah Tisdale also had eight against  Southern Utah … Five players have totaled over 50 rebounds this season – Jeromy Rodriguez (118), Bo Hodges (96), Lucas N’Guessan (90), Isaiah Tisdale (62) and Vonnie Patterson (57).

VMI has dropped five straight and enters Saturday at 5-12, 0-4 in SoCon play.

The Keydets have played five games this season have been decided by five points or less; however, VMI has lost four of those five contests.

Freshman guard  Travis Evee has recorded five games of scoring 20-plus points, including a 25-point effort in the 78-75 setback to Samford on Jan. 4  … Evee also tied a career high with six made three versus the Bulldogs.

Evee leads the team in scoring  at 13.2 points per game, while he and  Kamdyn Curfman have accounted for 95 of  VMI’s 194 made threes … Curfman leads the team with 48  triples  and  Evee has netted 47 … Curfman is averaging 11.2 points, while Garrett Gilkeson is posting  11.1 points and 5.7 rebounds per game.

Gilkeson ranks sixth nationally in assist/turnover ratio (3.59), while Curman ranks 21st in threes made and Evee is 25th.

ETSU concludes its brief two-game homestand Wednesday night when the Bucs take on Samford at 7 p.m.