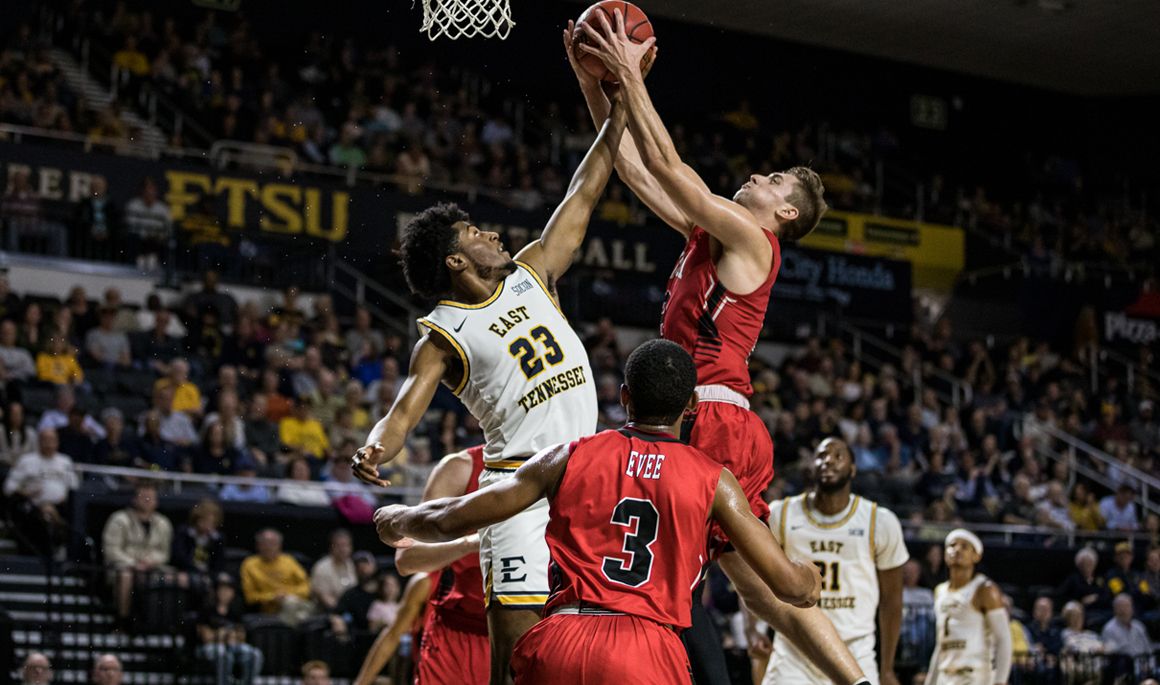 After another sluggish offensive performance, ETSU men’s basketball turned to its lock-down defense to secure a 61-55 win over VMI in front of 4,730 fans on Saturday inside Freedom Hall.

Defense has been the Buccaneer calling card as of late and the Blue and Gold took to the challenge against an offensive-minded Keydet club. ETSU held the visitors from Lexington 19 points below its season average and four under its average of three-pointers made.

With the win, ETSU – who has held its opponents to 54 points and 23 percent shooting from beyond the arc in the last eight games – improved to 15-3 and 4-1 in SoCon play. VMI suffered its sixth straight defeat and moved to 5-13, 0-5. The Bucs have now won the last nine meetings versus the Keydets and 18 of the last 20; however, the last two home games have been decided by nine total points.

The Bucs looked to have returned to their offensive ways early on as they hit four of their first five shots and opened to a 9-0 lead two-and-a-half minutes into the contest. However, VMI survived the first punch and went on a 15-4 run to go ahead 15-13 at the 9:36 mark.

The Keydets would then lead 17-16 with just over six minutes left before the break – the latest ETSU has trailed at home this season – but after a steal by Good, Tray Boyd III (Memphis, Tenn.) hit N’Guessan for a layup, putting ETSU back ahead 18-17.

The Blue and Gold never trailed after that bucket and ETSU eventually scored eight consecutive points to extend its lead to seven, 24-17, following back-to-back threes by Boyd.

Just as they started the first half, ETSU came out strong in the second by scoring the first nine points en route to building a 35-21 lead with 17:50 remaining.

Unfortunately, that would mark the Bucs’ largest lead of the night.

VMI clipped the deficit to seven before ETSU went back up 10, 51-41, with just under five minutes to play. The Keydets inched within four in the final minute, but the Bucs made six of their last nine free throws to secure a 10th straight home win.

ETSU was out-rebounded by four, 37-33, but the Bucs were plus-six in second-chance points, 10-4. The Blue and Gold also forced 19 turnovers and turned those into 14 points.

Travis Evee led all players with 13 points in the losing effort, while Greg Parham came off the bench to add 12 points and three assists.

ETSU concludes its brief two-game homestand Wednesday night when the Bucs take on Samford at 7 p.m.