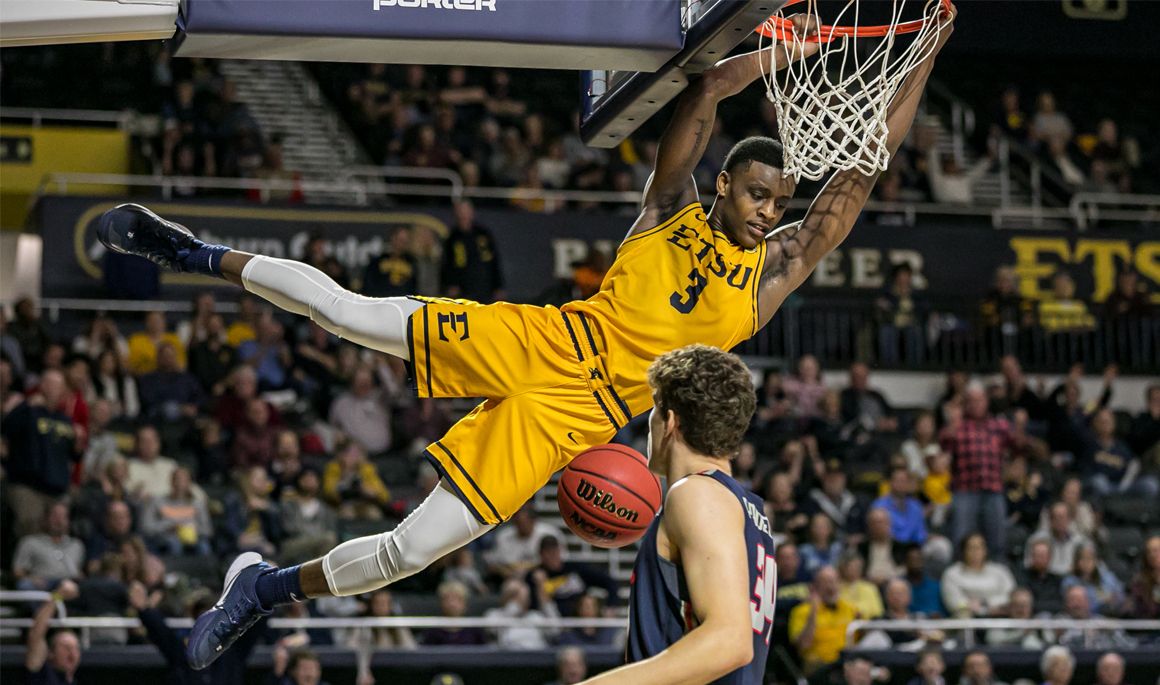 JOHNSON CITY, Tenn. (Jan. 15, 2020) – The ETSU men’s basketball team got its offense back on  track with five players scoring in double figures en route to the Buccaneers bouncing the Samford Bulldogs by 25 points, 88-63, on Wednesday night inside Freedom Hall.

The Bucs, who were held below their season scoring average for the first four games of 2020, were led by senior guard Tray Boyd III (Memphis, Tenn.) as he poured in 16 points, while graduate transfer Joe Hugley (Gaithersburg, Md.) added 14 points and five rebounds. Senior center Lucas N’Guessan (De Lier, Netherlands) finished with 12 points and five rebounds, while guards Patrick Good (Johnson City, Tenn.) and Daivien Williamson (Winston-Salem, N.C.) both pitched in with 11.

Overall, the Buccaneer bench accounted for 45 points, while 48 points were scored in the paint and 27 came from beyond the arc – courtesy of Boyd totaling four of the nine triples. The Bucs shot 52 percent (34-65) from the field and converted 16 Bulldog turnovers into 25 points.  The Blue and Gold assisted on 19 of the 34 makes and tallied 11 steals – four coming from junior Bo Hodges (Nashville, Tenn.). Hodges also registered eight points, nine rebounds and six assists.

The Blue and Gold continued their home dominance as they hit their first four shots and led wire-to-wire, making it 415 of the possible 440 minutes leading inside the friendly confines of Freedom Hall this season.

After the Bucs went ahead 8-2, Samford inched within two points on three different possessions, but ETSU used a 14-4 run to extend its lead to 33-21 following a bucket in the paint by Hugley at the 3:48 mark. The Bulldogs cut it to six but the Bucs carried an eight-point lead into the break, 37-29.

Twenty-eight of the Bucs’ points came in the paint in the opening 20 minutes, where ETSU shot 52 percent (17-33) from the floor. Hugley led the Blue and Gold with 12 points, while seven different players scored.

ETSU then heated up in the second by outscoring Samford, 51-34, to secure the Bucs’ largest win since defeating Mars Hill by 69 points on Dec. 29.

The Bucs used the first five minutes of the second half to have their lead balloon to 17 as N’Guessan laid one home at the 14:43 mark, making it a 53-36 score. Two minutes later Hodges dished out his fifth assist of the night when he found Williamson open beyond the arc to make it 59-39.

The closest Samford got was 16, while a quick 7-0 Buccaneer run pushed it back to 23, 66-43,  with just under 10 minutes to play. ETSU’s lead hovered around 20, while they took its largest lead of the night when an unselfish dunk from Williamson to Octavion Corley (Reno, Nev.) made it 88-59 in the final minute.

The Bucs hit seven of their 15 three-point attempts in the second half, while also going 10-of-14 at the free throw line. Nine different players scored for the Blue and Gold in the half with Boyd netting 11 of his 16 points in the stanza.

For the game, Samford shot 39.6 percent (21-53) from the floor and went 6-of-17 from beyond the arc. Senior guard Josh Sharkey led the Bulldogs with 18 points but was held to three assists and turned the ball over seven times. Sharkey, Samford’s leading scorer, was held to five points on 1-of-3 shooting in the first half.

The Bucs now gear up for a first-place battle at Western Carolina on Saturday night. The Bucs hold a half-game lead over WCU in the conference standings, as the Catamounts suffered their first SoCon loss at Furman on Wednesday night. Tip-off is set for 7 p.m. inside the Ramsey Center.