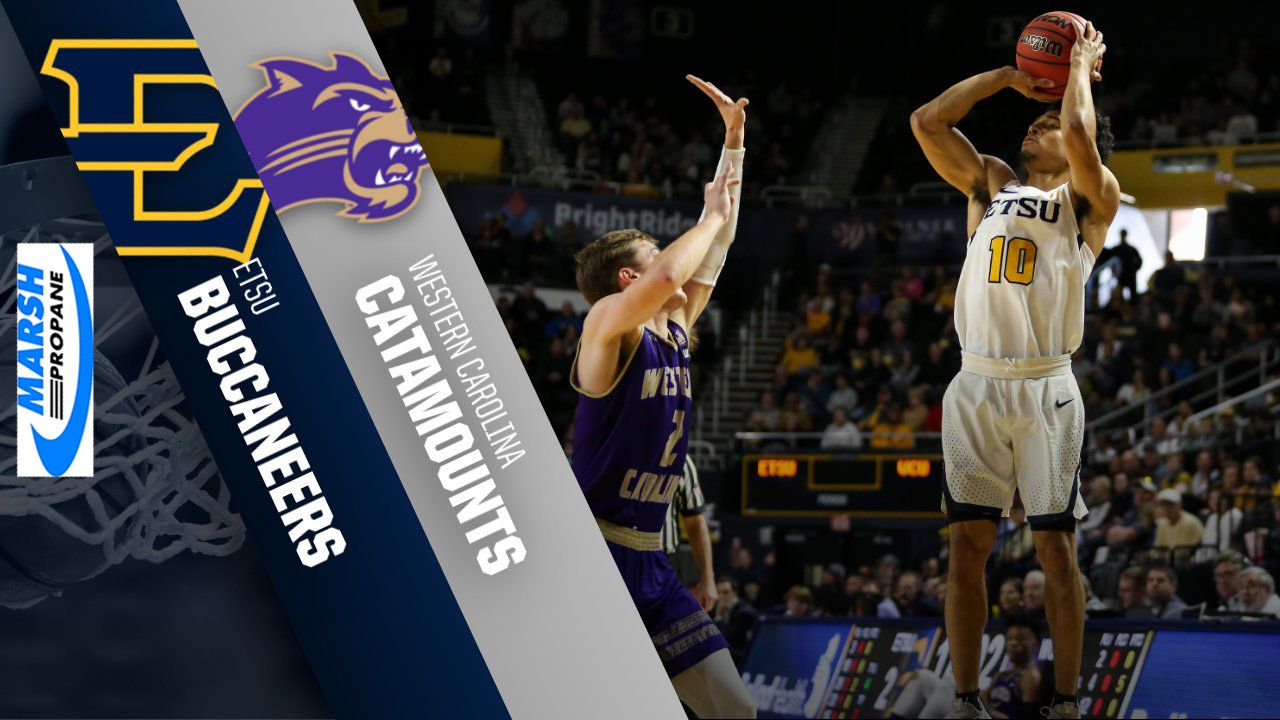 Pair of league leaders to meet in North Carolina

CULLOWHEE, N.C. (Jan. 17, 2020) – A pair of league leaders are set to meet on the hardwood Saturday night as ETSU men’s basketball heads to North Carolina to face Western Carolina. Tip-off for the NexStar Game of the Week is set for 7 p.m. inside Ramsey Center.

Saturday’s game will be streamed live on ESPN+ with Pete Yanity and Dean Keener on the call; CLICK HERE FOR LIVE VIDEO

JOHNSON CITY, Tenn. (Jan. 15, 2020) – The ETSU men’s basketball team got its offense back on  track with five players scoring in double figures en route to the Buccaneers bouncing the Samford Bulldogs by 25 points, 88-63, on Wednesday night inside Freedom Hall.

The Bucs, who were held below their season scoring average for the first four games of 2020, were led by senior guard Tray Boyd III (Memphis, Tenn.) as he poured in 16 points, while graduate transfer Joe Hugley (Gaithersburg, Md.) added 14 points and five rebounds. Senior center Lucas N’Guessan (De Lier, Netherlands) finished with 12 points and five rebounds, while guards Patrick Good (Johnson City, Tenn.) and Daivien Williamson (Winston-Salem, N.C.) both pitched in with 11.

Overall, the Buccaneer bench accounted for 45 points, while 48 points were scored in the paint and 27 came from beyond the arc – courtesy of Boyd totaling four of the nine triples. The Bucs shot 52 percent (34-65) from the field and converted 16 Bulldog turnovers into 25 points.  The Blue and Gold assisted on 19 of the 34 makes and tallied 11 steals – four coming from junior Bo Hodges (Nashville, Tenn.). Hodges also registered eight points, nine rebounds and six assists.

Since the start of the 2017-18 season, ETSU has registered 24 true road wins, which are tied for the sixth-most in Division I play … Vermont leads the country with 29, while Belmont and Lipscomb have won 27, Hofstra has 26, Gonzaga has 25 and the Bucs are tied with UNCG, Furman and Stony Brook.

Tray Boyd III has been a solid sixth man for the Buccaneers as he’s totaled 252 points in 19 games off the bench for the Blue and Gold, which leads all Division I players in bench scoring (UC-Irvine’s Collin Welp is second at 247 points).

When it comes to junior guard Bo Hodges, he has continued to fill up the stat sheet for the Blue and Gold in 2019-2020 …  Through 19 games, Hodges has totaled 242 points, 109 rebounds, 50 assists, 28 steals and 18 blocks … Hodges is only one of two players in the country to have totaled at least 240 points, 100 rebounds, 50 assists and 18 blocks (courtesy of Sports-Reference.com) …  Hodges has scored in double figures 12 times this season and has compiled two 20-plus scoring games.

When it comes to the month of January, head coach Steve Forbes has his Bucs playing stellar basketball … Since arriving at ETSU, Forbes’ teams have gone 33-7 (.826) in the month of January, while winning 23 of its last 25 games in January … The 33 wins during this span are tied for the fourth-most in the country only behind Bucknell (35), Vermont (35) and Belmont (34).

Since head coach Steve Forbes took over the reins in 2015-16, ETSU has won the most games in the Southern Conference with 60 victories … UNCG (58), Furman (55) and Wofford (53) are the other top win leaders in league play during this span.

The Catamounts suffered their first league loss of the season Wednesday night as Western Carolina dropped an 83-79 decision at Furman.

Western Carolina had won five straight prior to the loss at Furman.

The Catamounts have four players averaging in double figures in scoring with Mason Faulkner leading the team at 18.1 points per game  … Carlos Dotson is posting 13.9 points and 8.9 rebounds per game, while Matt Halvorsen is averaging 11.6 points and Onno Steger is at 10.8 points per game.

The Catamounts are 7-0 at home this season.

Last season guard Patrick Good set the all-time single-season program record by draining 11 three-pointers in the 91-69 win at Western Carolina on Jan. 26, 2019 … Good, who scored a career-high 35 points, went 12-of-18  from the field (11-of-17 from beyond the arc) en route to surpassing Courtney Pigram’s mark of 10 made threes that was set on Feb. 28, 2009 … Good became the 16th player in program history to score at least 35 points in  game, while his previous scoring high was 21 points – twice when he was at Appalachian State … In the two games last season, ETSU averaged 86 points, while shooting 58 percent (64-111) from the field and 50 percent from beyond the arc (21-42) … The Bucs made nearly as many threes in the two games than free throws as ETSU went 23-of-46 (50 percent) at the stripe … Good averaged 19 points in the two games, while Hodges is averaging  10.5 points, 2.8 rebounds and 2.0 assists in four career games vs. the Catamounts.