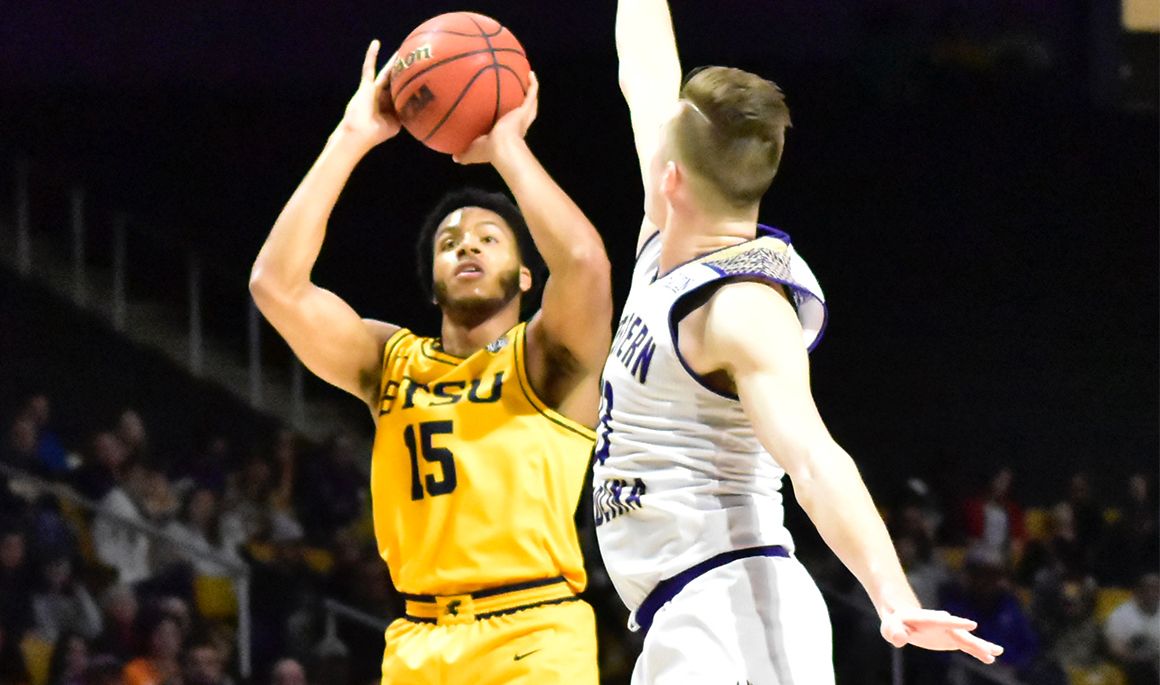 CULLOWHEE, N.C. (Jan. 18, 2020) -- Senior point guard Isaiah Tisdale (Lexington, Ky.) registered his first double-double as a Buccaneer, while ETSU stormed out of the gates by scoring 52 first-half points en route to dismantling Western Carolina, 85-66, in front of 3,756 fans on Saturday night inside the Ramsey Center.

In a game that had a Southern Conference Tournament feel, featuring the two top teams in the league, Tisdale connected on his first six threes and totaled 26 points and a career-high 12 rebounds. Tisdale’s six threes also set a career mark.

Tisdale was joined by Tray Boyd III (Memphis, Tenn.), Lucas N’Guessan (De Lier, Netherlands) and Bo Hodges (Nashville, Tenn.) in double figure scoring. Boyd scored 10 of his 16 points in the second half, while N’Guessan added 15 on 5-of-7 shooting – along with draining his third career make from beyond the arc – and Hodges pitched in with 14 points, four assists and three rebounds.

As a team, the Bucs shot 50 percent for the second straight game as ETSU went 29-of-58, while the Blue and Gold netted 10 threes on 23 attempts. The Bucs shot 77 percent at the free throw line (17-22), with N’Guessan (4-5), Hodges (2-2), Boyd (4-5), Daivien Williamson (2-2) and Vonnie Patterson (2-2) combining to go 14-of-16. Patterson finished with nine points, seven rebounds and two steals. The Bucs were also strong with the ball as they only turned the ball over eight times, marking the third straight game ETSU finished with less than 10 turnovers.

The Bucs improved to 17-3, 6-1, as ETSU now sits alone atop the conference standings. ETSU has also won 26 of the last 27 against the Catamounts, including nine straight overall and 13 consecutive in Cullowhee. Western Carolina, who was held 16 points below its season average, dropped to 12-5, 4-2.

ETSU hit its first five shots to open the game and led 14-5 following Tisdale’s third trey of the  night. The shots continued to fall as Hodges got in on the three-point barrage as he drained a pair over a two-minute stretch, extending three lead to 13, 27-14 with 9:46 left in the half.

After the Catamounts cut their deficit to six with just over seven minutes to go, ETSU rattled off nine consecutive points, pushing it to 15, 38-23 with 4:24 showing on the clock. Two minutes later Tisdale found N’Guessan beyond the arc for a triple to make it 17 and the Bucs carried momentum into the break with an 18-point advantage, 52-34.

The Bucs, who led by as many as 21 in the first half, never let the Catamounts cut it to single digits.

ETSU led by 20 early in the second half before Western Carolina used a 14-4 run to make it 61-51 with 9:01 to play. The Bucs then silenced the crowd by scoring seven straight points over a minute and a half stretch to extend the lead to 17, 68-51.

The quick surge was the final punch and N’Guessan put the exclamation point on it when Boyd fed him with a fast break dunk and converted the and-one, resulting in an 81-64 score with 1:34 left.

Western Carolina shot 38 percent (19-50) from the field and went 7-of-21 from beyond the arc. Three Catamounts scored in double figures with Mason Faulkner finishing with a team-high 18 points.