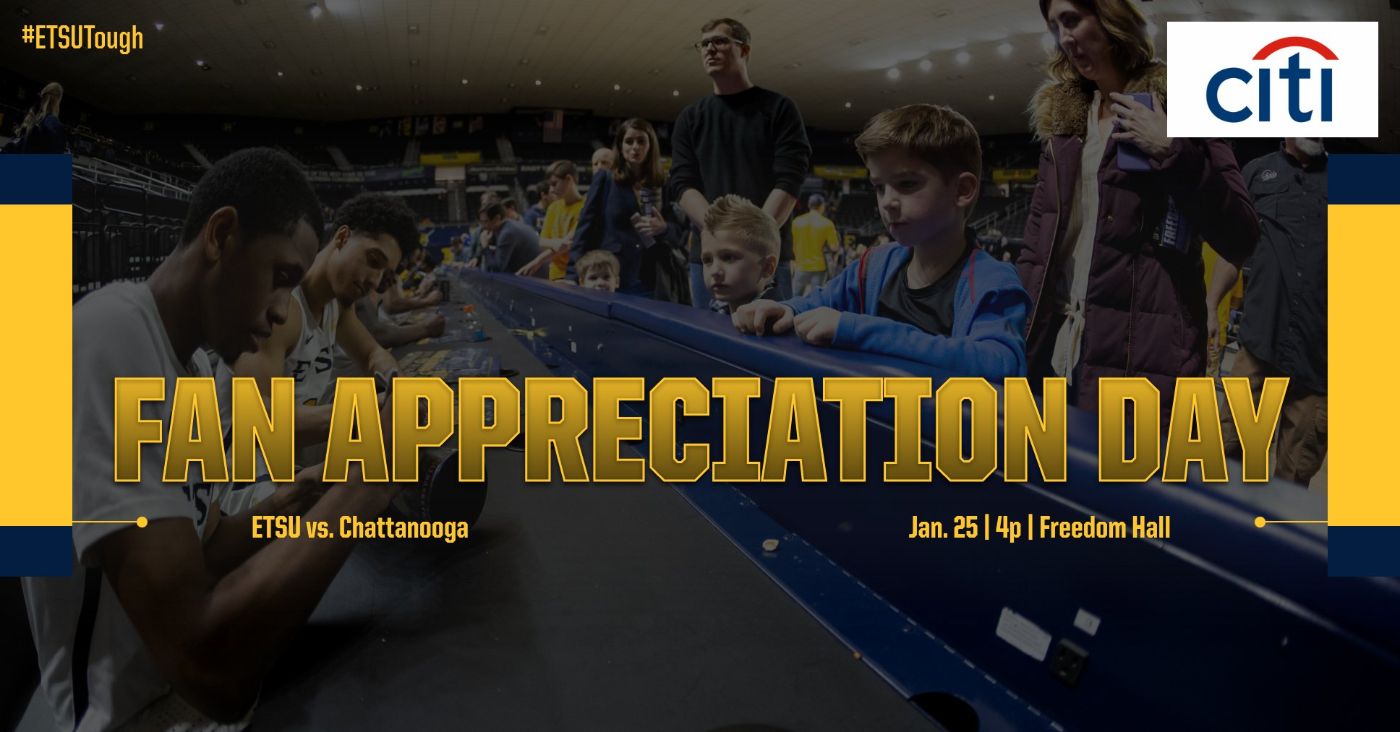 Below are the top “Things to Know” presented by Citizens Bank for Saturday’s game.

No. 1 – Saturday’s game against the Mocs is set for 4 p.m. inside Freedom Hall … Please note, due to an expected large crowd, Freedom Hall will open at 2:30 p.m.

No. 3 – ETSU students receive FREE admission and FREE parking by showing a valid ID ... ETSU students can also purchase guest tickets for $5 ... Student tickets can be picked up at the Student Activities & Organizations, located in Room 213 inside the CPA or online by clicking here

No. 4 – Saturday’s game, presented by Citi, is our annual Fan Appreciation game … Fans will be treated to a postgame autograph session with the Buccaneer players, ETSU men’s basketball souvenir cups will be placed in each cupholder inside Freedom Hall, team posters will be distributed and a limited supply of Pepsi headbands will be given away.

No. 5 – For fans without parking passes, free parking is available in designated lots surrounding Freedom Hall … Please click the map below to view these designated free parking areas: 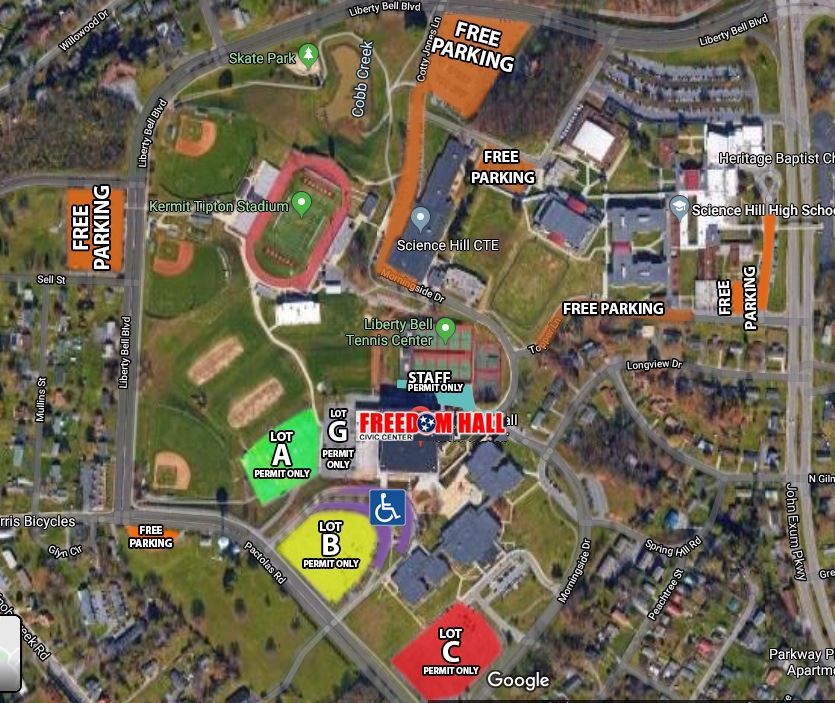 Saturday’s game will be streamed live on ESPN+ with Kasey Marler and Bruce Tranbarger on the call; CLICK HERE FOR LIVE VIDEO

“Voice of the Bucs” Jay Sandos will have the radio call on WXSM-AM 640 beginning with the Atmos Energy Pregame Show at 3:30 p.m.; CLICK HERE FOR LIVE AUDIO

CULLOWHEE, N.C. (Jan. 18, 2020) – Senior point guard Isaiah Tisdale (Lexington, Ky.) registered his first double-double as a Buccaneer, while ETSU stormed out of the gates by scoring 52 first-half points en route to dismantling Western Carolina, 85-66, in front of 3,756 fans on Saturday night inside the Ramsey Center.

In a game that had a Southern Conference Tournament feel, featuring the two top teams in the league, Tisdale connected on his first six threes and totaled 26 points and a career-high 12 rebounds. Tisdale’s six threes also set a career mark.

Tisdale was joined by Tray Boyd III (Memphis, Tenn.), Lucas N’Guessan (De Lier, Netherlands) and Bo Hodges (Nashville, Tenn.) in double figure scoring. Boyd scored 10 of his 16 points in the second half, while N’Guessan added 15 on 5-of-7 shooting – along with draining his third career make from beyond the arc – and Hodges pitched in with 14 points, four assists and three rebounds.

As a team, the Bucs shot 50 percent for the second straight game as ETSU went 29-of-58, while the Blue and Gold netted 10 threes on 23 attempts. The Bucs shot 77 percent at the free throw line (17-22), with N’Guessan (4-5), Hodges (2-2), Boyd (4-5), Daivien Williamson (2-2) and Vonnie Patterson (2-2) combining to go 14-of-16. Patterson finished with nine points, seven rebounds and two steals. The Bucs were also strong with the ball as they only turned the ball over eight times, marking the third straight game ETSU finished with less than 10 turnovers.

The Bucs improved to 17-3, 6-1, as ETSU now sits alone atop the conference standings. ETSU has also won 26 of the last 27 against the Catamounts, including nine straight overall and 13 consecutive in Cullowhee. Western Carolina, who was held 16 points below its season average, dropped to 12-5, 4-2.

GETTING BACK ON BOARD

TAKING CARE OF THE ROCK

Over the last three games, ETSU has only turned the ball over 25 times (8.3 per game) … The Bucs had eight turnovers vs. VMI  and at Western Carolina, while posting nine in the win over Samford … The last time ETSU had a streak of having three straight games with less than 10 turnovers was Dec. 10-19, 2017 …  During these three games, ETSU has 41 assists to its 25 turnovers, while Isaiah Tisdale has seven assists to one turnover, Patrick Good has eight assists to two turnovers and Bo Hodges has 11 turnovers to four assists.

When it comes to the month of January, head coach Steve Forbes has his Bucs playing stellar basketball … Since arriving at ETSU, Forbes’ teams have gone 34-7 (.829) in the month of January, while winning 24 of its last 26 games in January … The 34 wins during this span are tied for the fourth-most in the country only behind Vermont (37), Bucknell (36) and Belmont (35).

Since head coach Steve Forbes took over the reins in 2015-16, ETSU has won the most games in the Southern Conference with 61 victories … UNCG (59), Furman (56) and Wofford (55) are the other top win leaders in league play during this span.

Chattanooga has won three of its last four and enters Saturday’s game at 13-7 overall, 4-3 in SoCon play.

Three players are averaging double figures in scoring for the Mocs with Matt Ryan leading the way at 14.5 points per game … David Jean-Baptist is averaging 13.5 points and Ramon Vila is posting 11.1 points and 5.5 rebounds per game … Ryan, a transfer from both Notre and Vanderbilt, and Jean-Baptist have accounted 83 of the 163 made three-pointers this season.

The Mocs are 8-1 at home this season but have last six of their nine true road games.

The rivalry between the Buccaneers and Mocs is in many ways directly related to the similarities between the programs. Both teams’ successes have mirrored each other since their time in the SoCon … Overall, the teams have accounted for 53 overall championships (23 for ETSU), 32 regular season titles (including North Titles) with the Bucs winning 13, 21 NCAA appearances (10 by the Bucs), each program has one Sweet 16 appearance, 15 Players of the Year (10 by the Bucs) and 15 Coaches of the Year (8 by the Bucs) ... The teams have met six times in the SoCon Championship game with both teams winning three of them ... The most points scored by the Bucs against the Mocs was 104 in the win back in 1990-91, while UTC scored 107 in the victory back in 1973-74 ... Thirty-two of the previous 88 meetings have been decided by five points or less, including five by one point …  Meanwhile, the two teams have also met 16 times in the SoCon tournament – a high for both teams – with those games being split at eight, including the Bucs winning the last two.

ETSU continues its homestand on Wednesday night when the Bucs host Mercer at 7 p.m. inside Freedom Hall.