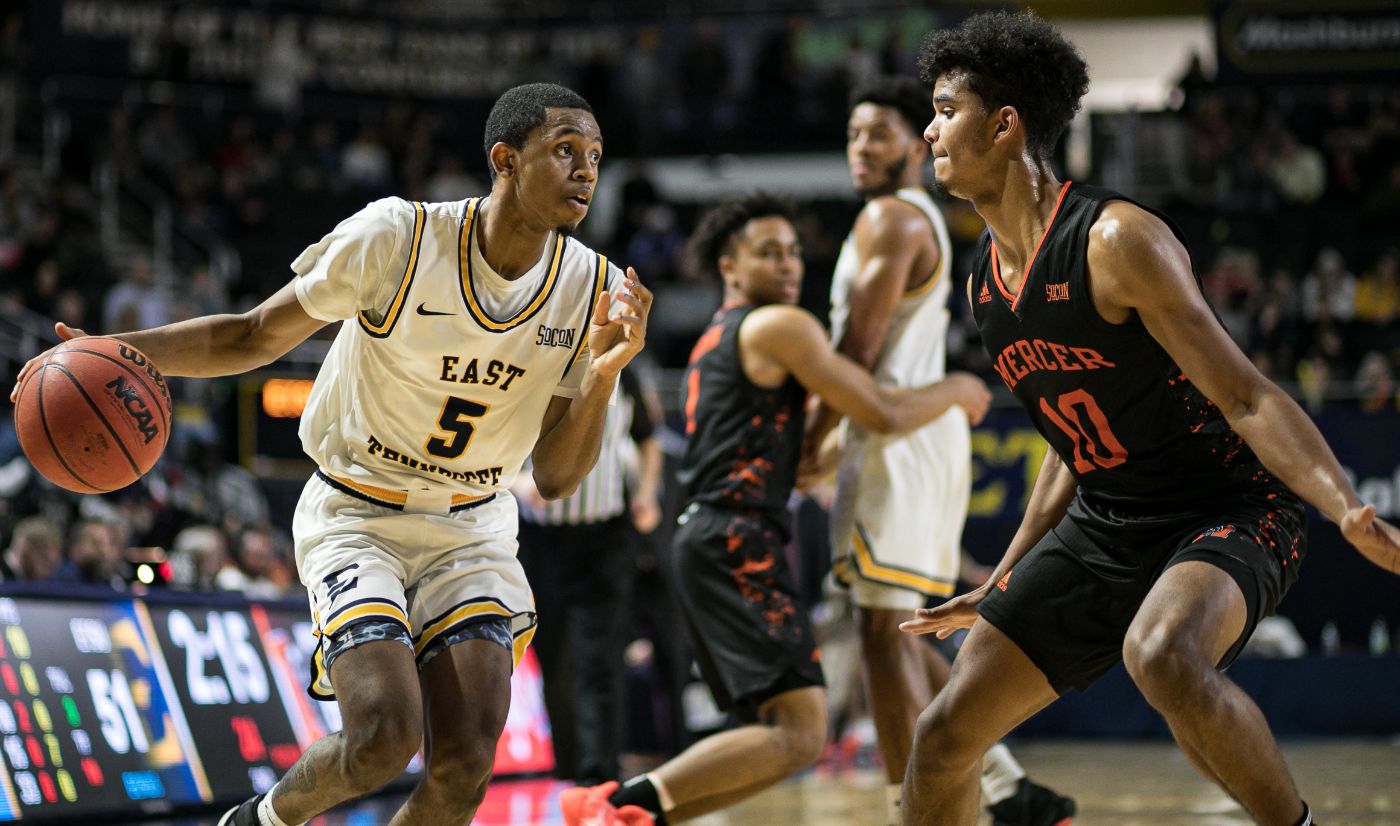 The ETSU men’s basketball team suffered its first home loss of the season as Mercer delivered the Blue and Gold a 71-55 setback on Wednesday night inside Freedom Hall.

The Bucs, who had won 12 straight at home, saw their five-game win streak snapped and 10-game run against Mercer come to an end. Despite the loss, ETSU still stands at 18-4 overall and  7-2 in SoCon play, placing them a half-game behind SoCon leader Furman at the midway point of the conference season. The Bucs are tied for second with UNCG and the Spartans visit Johnson City on Saturday afternoon for a 4 p.m. tip-off.

In a game where ETSU scored eight of the first 10 points, the Bucs never really got into sync on both ends of the floor. The Bucs shot 37 percent (22-60) from the floor, while going 3-of-22 from beyond the arc and 8-of-18 at the free throw line. Meanwhile, Mercer finished at 64 percent (27-42) – the highest shooting percentage allowed by the Bucs this season. The Blue and Gold were also out-rebounded by 12, 37-25, while also being out-scored by 14 points in the second half, 35-21.

Bo Hodges (Nashville, Tenn.) – coming off a career-high 27-point effort last Saturday – led the Bucs with 12 points and grabbed six rebounds. Lucas N’Guessan (De Lier, Netherlands) scored in double figures for the fifth straight game after ending with 11 points and six rebounds, and Daivien Williamson (Winston-Salem, N.C.) netted 10 points. Joe Hugley (Gaithersburg, Md.)  accounted for two of the Bucs’ three triples; however, all three of ETSU’s long-range shots came in the first half. The Bucs went 0-for-10 from beyond the arc in the second, marking the second straight game ETSU has been shutout from three in a half.

Despite the quick start, ETSU couldn’t sustain the run as Mercer hit the Blue and Gold with an 18-5 surge to go ahead, 20-13 at the 11:09 mark. The Bears eventually pushed their lead into double figures at 30-19, but the Bucs closed the last seven-and-a-half minutes on a 15-6 run to make it a two-point deficit at the break, 36-34.

The Bears shot 63 percent in the first half (15-24), compared to ETSU’s 47 percent clip (14-30). Both teams also made three three-pointers and three free throws in the opening 20 minutes.

Unfortunately, Mercer never cooled off in the second half and the Bucs couldn’t regain the lead.

After both teams traded buckets to start the second stanza, the Bears then scored seven straight points to extend their lead to nine, 45-36, five minutes into the frame. ETSU made it 45-40 with had a chance to inch closer, but the Bucs missed a lay-up and Mercer was fouled on the next possession. The Bears made both free throws to go up seven with 14:03 showing on the clock.

With less than 10 minutes left, ETSU had the ball down eight, but the Bucs missed a jumper and Mercer quickly scored, pushing its lead back double digits. The lead stayed above 10 for the remainder of the night and the Bears led by as many as 18 in the closing minutes, marking ETSU’s largest home loss since falling to UNCW by 21 back on Nov. 28, 2015.

Djordje Dimitrijevic led all players with 18 points on 6-of-9 shooting, while Ethan Stair added 11 points and 15 rebounds.