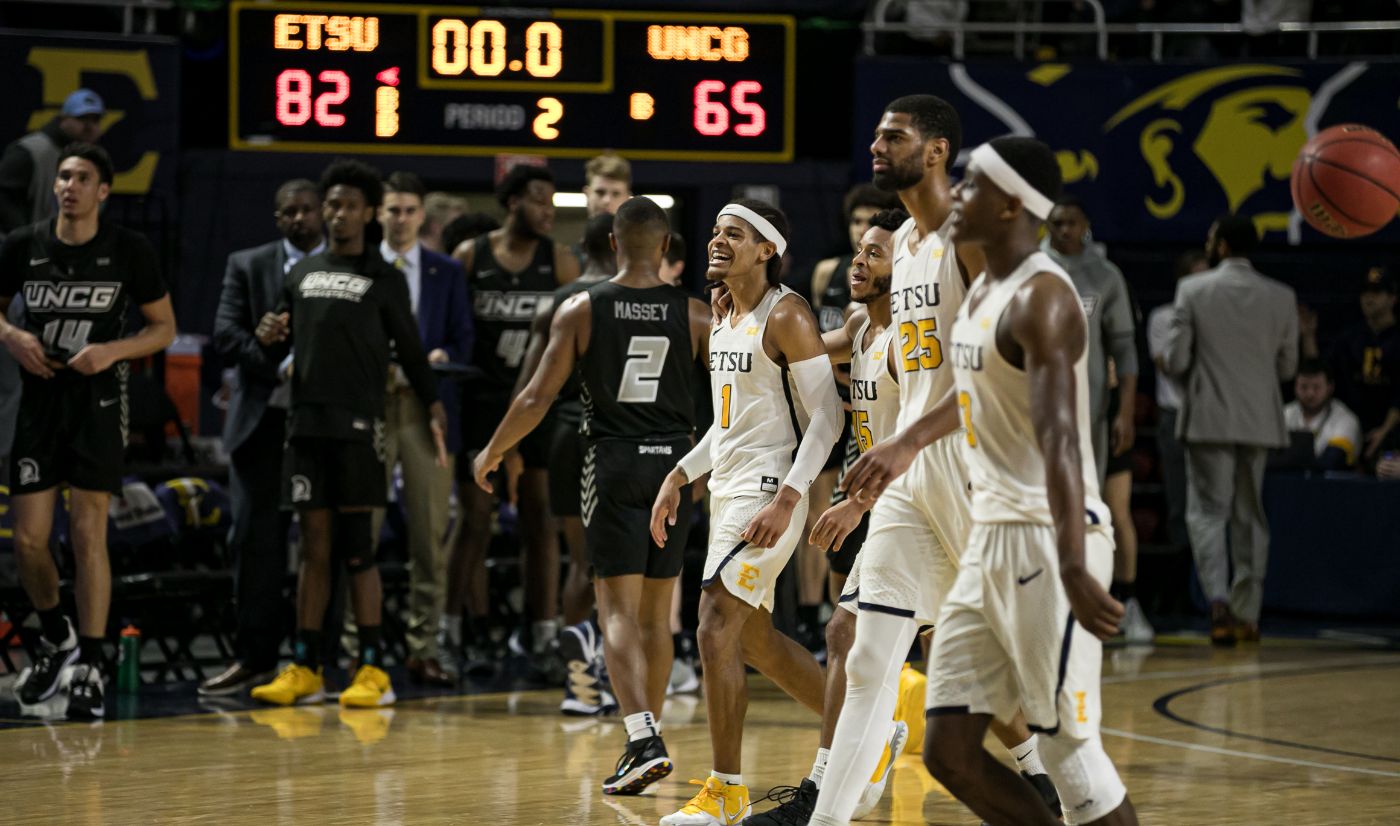 Boyd pours in 30; ETSU outscores UNCG by 17 in the second half

After falling behind by 14 points early in the game, the ETSU men’s basketball team rode the hot hand of senior guard Tray Boyd III (Memphis, Tenn.), as he poured in a career-high 30 points en route to helping the Buccaneers slay the UNCG Spartans, 82-65, in front of 5,838 fans on Saturday evening inside Freedom Hall.

Boyd, making his first start of the season, ignited the Blue and Gold to complete a 31-point turnaround following his strong performance. The Memphis native was 10-of-16 from the field and knocked down six of the Bucs’ nine three-pointers to help ETSU bounce back into the win column and move into a tie for first-place with Furman in the Southern Conference standings. Boyd became the 11th Buccaneer since 2010-11 to reach the 30-point mark, and the first since teammate Patrick Good (Johnson City, Tenn.) netted a career-high 35 last season at Western Carolina.

The Spartans came out on fire by hitting eight of their first nine shots and led 19-5 six minutes into the contest.

ETSU never panicked and quickly used a 20-6 run over the next 10 minutes to pull even at 25 with just under five minutes remaining in the half. Despite seeing the Spartans go back ahead by six on two different possessions, the Bucs battled and tied it at halftime as Boyd’s second triple in the closing seconds made it a 37-37 game.

Boyd led all scorers at the break with 14, while both teams shot 57 percent in the opening 20 minutes.

It was a perfect storm in the second half as the Bucs continued their hot shooting and the Spartans were silenced by ETSU’s stifling defense.

After never having the lead for the entire first half, the Bucs grabbed their first of the contest a minute and a half into the second when Boyd connected on a pair of free throws, making it 41-39. ETSU eventually went up by four but UNCG rattled off five straight points to regain a 44-43 lead with 14:50 showing on the clock.

Their lead didn’t last long as Isaiah Tisdale (Lexington, Ky.) grabbed an offensive rebound on the Bucs’ next trip down and laid one in for his first points of the night, giving the Blue and Gold a 45-44 advantage at the 14:28 mark.

The lead never dipped below 12 and Boyd put the exclamation point on it when N’Guessan fed him for a three on ETSU’s final possession, giving him a 30-point performance and a 17-point home win for the Bucs.

ETSU shot 54 percent (14-26) in the second half, compared to UNCG’s 39 percent clip (11-28). The Bucs also made four of their eight attempts from three and the Spartans missed eight of their last 10. The Blue and Gold led for 18 minutes and 12 seconds of the second half.

The Spartans were led by preseason player of the year Isaiah Miller as he scored 18 points, while Keyshaun Langley pitched in with 14.

The Bucs wrapped up a three-game homestand on Saturday and now hit the road for two straight games beginning Wednesday night at Chattanooga. Tip-off is set for 7 p.m. inside McKenzie Arena.