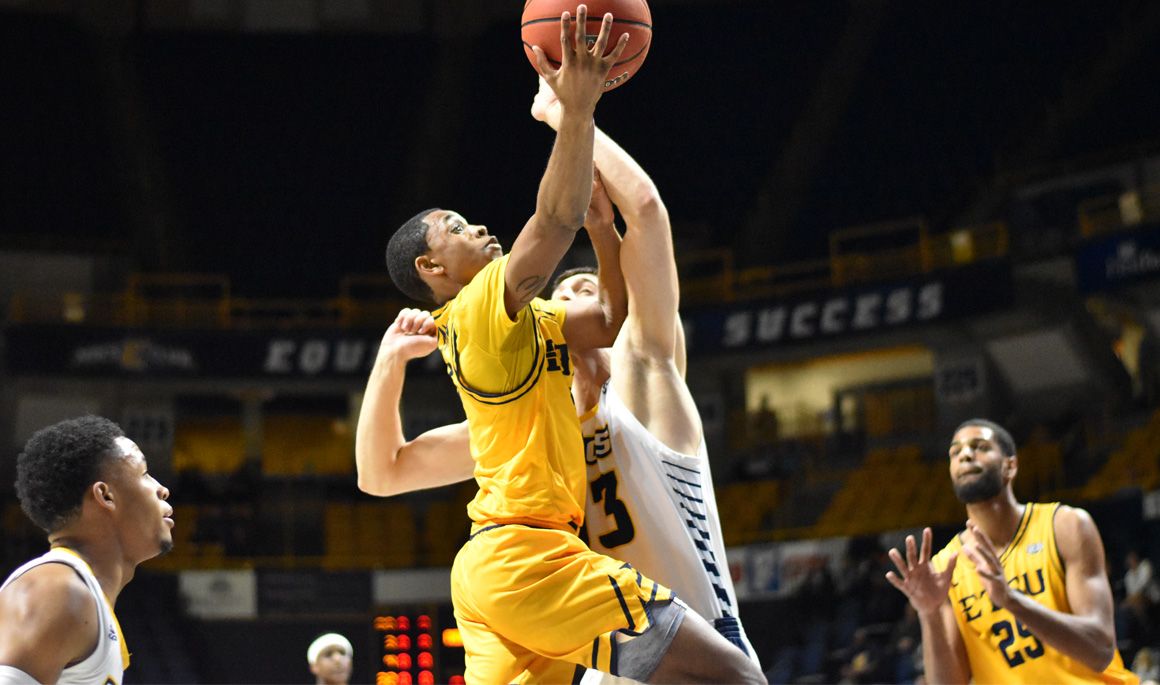 In a game where ETSU ended the final seven minutes on a 24-11 run, Williamson and N’Guessan both posted their first collegiate double-doubles. Williamson tallied 14 points and dished out a career-high 10 assists, while N’Guessan added 12 points (6-of-7 shooting) and career-high 12 rebounds, marking the seventh straight game he scored in double figures.

After missing his first six shots in the first half, Boyd got going early in the second as he scored the Bucs’ first nine points en route to going 6-of-9 from the field and 5-of-7 from beyond the arc in the second stanza. Bo Hodges (Nashville, Tenn.) and Isaiah Tisdale (Lexington, Ky.) also scored in double figures as they combined for 27 points on 10-of-17 shooting. Hodges, who is now 88 points shy of reaching the 1,000-point mark, ended with 16 points and six rebounds, while Tisdale netted 11 points, four boards, three assists and two steals.

For the game, ETSU shot 53 percent (32-61), while finishing with nine made triples – seven coming in the second half. The Bucs scored 18 points off 12 Chattanooga turnovers and were plus-16 in points in the paint (42-26). ETSU out-rebounded the Mocs by three, 31-28, and cashed 11 offensive rebounds into 11 second-chance points. The Bucs also tallied 18 assists, eight steals and four blocks.

The Bucs extended their win streak to 10 straight games against Chattanooga – the longest run in series history – while ETSU improved to 20-4, 9-2. ETSU registered its fifth straight season of reaching the 20-win mark, marking a new program record.

The game was a tale of two halves.

Despite the Bucs going ahead 17-14 midway through the first half, Chattanooga made eight of its last 12 shots to take a 35-29 lead at the break.

The Mocs shot 54 percent (13-24) in the opening 20 minutes, while making four of their six attempts from long range. Meanwhile, the Bucs shot 40 percent (12-30) and made two of their 12 attempts from beyond the arc.

ETSU flipped the script in the second half.

Boyd provided the second-half spark by scoring the first nine points, while a steal and score by Tisdale erased Chattanooga’s seven-point lead and knotted the game at 40 four minutes into the half.

After the Bucs went ahead by two, the Mocs regained a 47-44 lead following a jumper by A.J. Caldwell with 11:39 remaining.

With the game tied at 51, ETSU took the lead for good when Williamson drove for a lay-up, putting the Bucs up two. The play of the game happened on the next series as N’Guessan blocked Ramon Vila’s lay-up, which led to Hodges grabbing the rebound – and after Williamson missed a jumper – Tisdale grabbed the offensive rebound and Williamson hit Hodges in the corner for three, making it 56-51 with 8:35 remaining.

The Bucs eventually outscored Chattanooga, 24-11 in the final seven minutes, which included a stretch of three straight dunks from N’Guessan, securing ETSU the 16-point road win – its 26th since the start of the 2017-18 season.

The Mocs were led by David Jean-Baptiste’s 16-point effort, while Vila and Matt Ryan each added 14 in the losing effort.