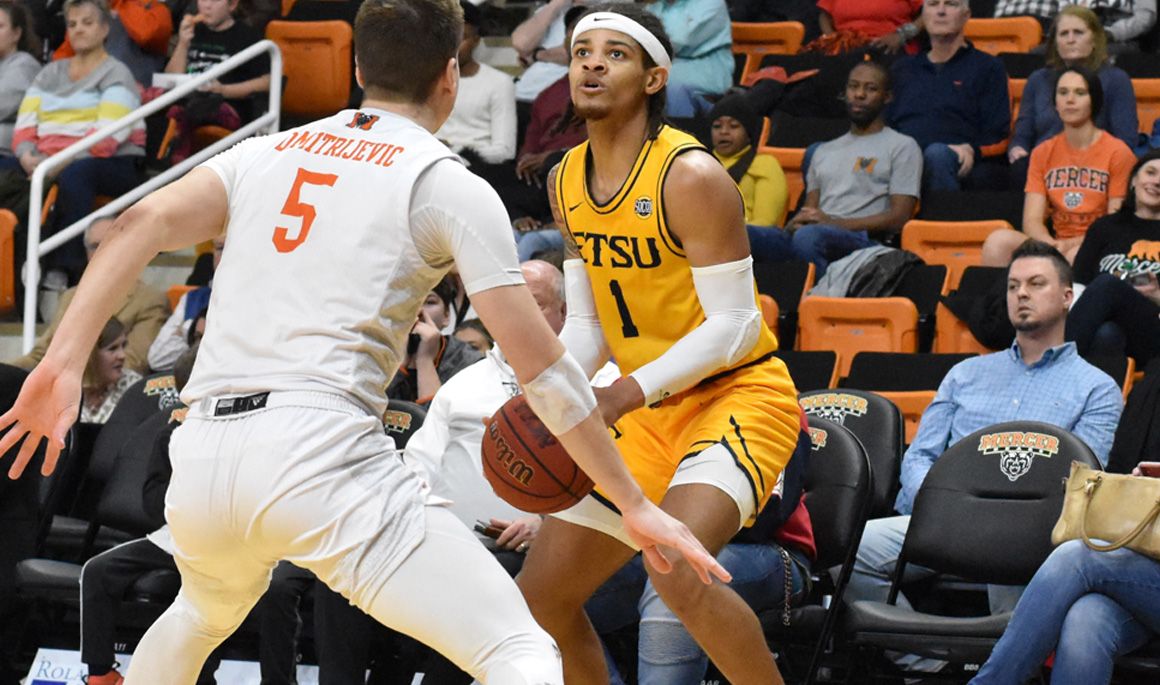 After having its 12-game home win streak snapped 11 days ago against Mercer, the ETSU men’s basketball team was able to return the favor, as the Blue and Gold defeated the Bears 73-60 on Saturday inside Hawkins Arena.

The short-handed Bucs had four players score in double figures as Daivien Williamson (Winston-Salem, N.C.) led the way with 16 points, four rebounds and two steals in 38 minutes. Tray Boyd III (Memphis, Tenn.) added 15 points, including a key second-half stretch where he netted six of seven points for the Bucs, along with totaling four assists, four steals and three  boards in 39 minutes. Despite fouling out after picking up three straight fouls in a 14-second stretch from the 12:43 to 12:29 mark, Bo Hodges (Nashville, Tenn.) finished with 11 points, five rebounds, three assists and three steals. Lucas N’Guessan (De Lier, Netherlands) registered his eighth straight game in double figures after totaling 13 points and six rebounds in 34 minutes of action.

For the third straight game, ETSU posted a shooting clip of 50 percent or better as the Bucs went 24-for-48 on Saturday, along with going 20-of-28 (71%) at the free throw line. The Blue and Gold scored 18 points off 16 Mercer turnovers, while outscoring the Bears 23-5 in transition.

With the win, ETSU – playing without Jeremy Rodriguez (Santiago, Dominican Republic) for the ninth straight game and Patrick Good (Johnson City, Tenn.) not making the trip due to family matters – improved to 21-4, 10-2. The Bucs won for the fifth straight time in Macon and lead the all-time series, 24-9.

The opening 10 minutes of the first half went back-and-forth, but with Mercer leading 11-10, ETSU held the Bears without a field goal for an eight-minute stretch to build a 24-13 advantage  following a pair of free throws by Williamson at the 4:26 mark. Mercer ended its drought with a three-pointer by Jeff Gary, and the Bears pulled within six, but the Blue and Gold scored five of the final seven points of the half to take a 31-22 lead into the break.

Despite having Isaiah Tisdale (Lexington, Ky.) pick up his third and fourth fouls in the opening minute of the second half and Hodges fouling out two-and-a-half minutes later, ETSU showed its toughness on the road.

After the Bears pulled within four in the opening five minutes of the second half, Boyd and Williamson connected on back-to-back threes to go ahead, 46-36 with 13:05 remaining.

Over a three-minute stretch the Bears would cut the deficit to six three times, but ETSU always had answer as a key offensive put back from Vonnie Patterson (Louisville, Ky.), followed by back-to-back makes by Boyd made it 60-52 at the 5:39 mark.

With just under four minutes to play, the Bears made it a five-point game, but Boyd continued knocking down clutch shots as his jumper with 3:22 left extended the Bucs’ lead to seven, 63-56.

ETSU scored 10 of the final 14 points in the closing minutes to cap off the 13-point win.

After shooting 64 percent in last month’s win in Johnson City, Mercer was held to 36 percent (20-56) in the rematch. The Bears, one of the top three-point shooting teams in the conference, was held to 5-of-20 on Saturday.

Djordje Diimitrijevic led all scorers with 22 points on 7-of-17 shooting, while Ethan Stair added 19 points and eight rebounds.

Mercer had its three-game home win streak snapped and moved to 12-13, 6-6 following the loss.