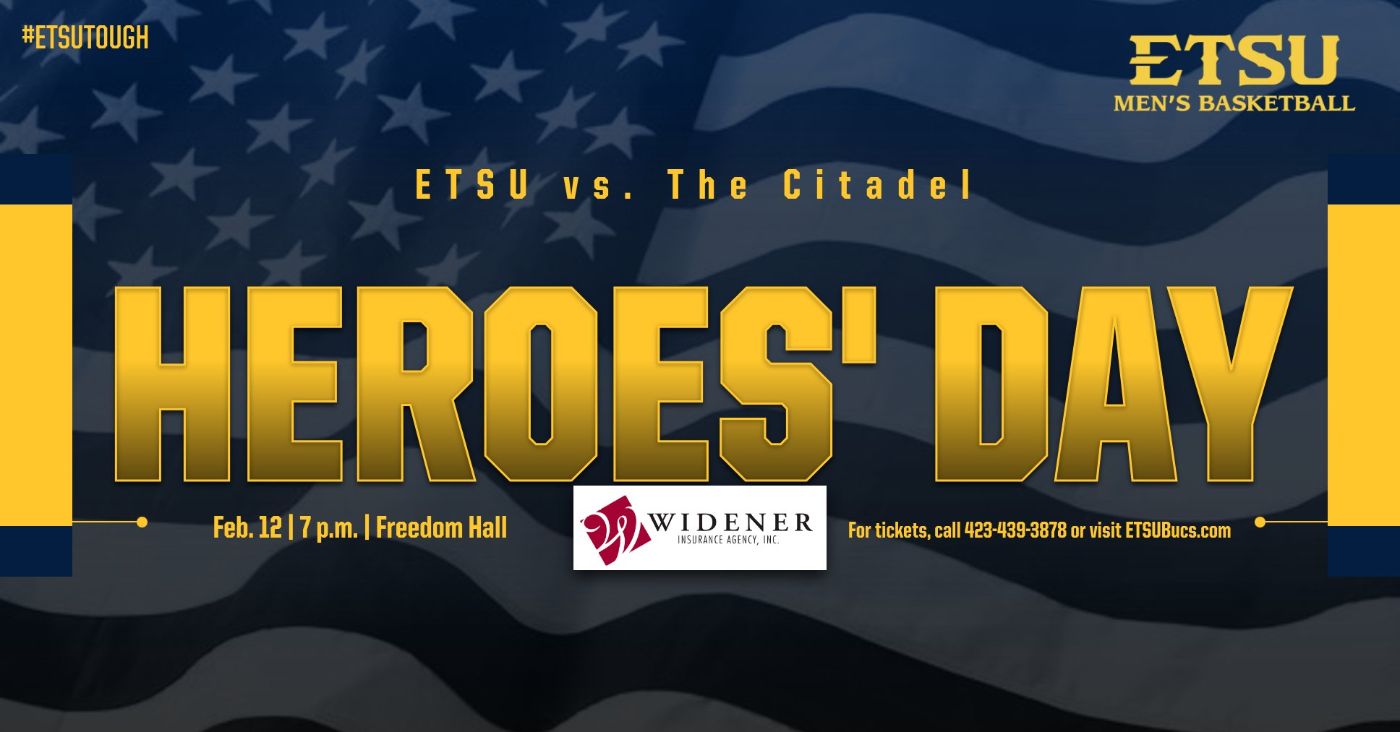 Wednesday is our annual Heroes’ Day promotion and the ETSU Athletics Department would like to extend an invitation to attend the game FREE OF CHARGE to all service men and women, as well as the first responders.

Wednesday’s game will be streamed live on ESPN+ with David Jackson and Bruce Tranbarger on the call; CLICK HERE FOR LIVE VIDEO

After having its 12-game home win streak snapped 11 days ago against Mercer, the ETSU men’s basketball team was able to return the favor, as the Blue and Gold defeated the Bears 73-60 on Saturday inside Hawkins Arena.

The short-handed Bucs had four players score in double figures as Daivien Williamson (Winston-Salem, N.C.) led the way with 16 points, four rebounds and two steals in 38 minutes. Tray Boyd III (Memphis, Tenn.) added 15 points, including a key second-half stretch where he netted six of seven points for the Bucs, along with totaling four assists, four steals and three  boards in 39 minutes. Despite fouling out after picking up three straight fouls in a 14-second stretch from the 12:43 to 12:29 mark, Bo Hodges (Nashville, Tenn.) finished with 11 points, five rebounds, three assists and three steals. Lucas N’Guessan (De Lier, Netherlands) registered his eighth straight game in double figures after totaling 13 points and six rebounds in 34 minutes of action.

For the third straight game, ETSU posted a shooting clip of 50 percent or better as the Bucs went 24-for-48 on Saturday, along with going 20-of-28 (71%) at the free throw line. The Blue and Gold scored 18 points off 16 Mercer turnovers, while outscoring the Bears 23-5 in transition.

With the win, ETSU – playing without Jeremy Rodriguez (Santiago, Dominican Republic) for the ninth straight game and Patrick Good (Johnson City, Tenn.) not making the trip due to family matters – improved to 21-4, 10-2. The Bucs won for the fifth straight time in Macon and lead the all-time series, 24-9.

MORE ON THE MERCER GAME

Sitting at 21-4 on the season, ETSU is off to its best start since the 2017-18 season when ETSU opened 22-4 after tying the program record with 16 straight wins.

Senior center Lucas N’Guessan extended his streak of scoring in double figures to eight straight games … During this stretch, N’Guessan is averaging 12.3 points, 6.4 rebounds and shooting 67 percent from the field, along with knocking down two shots from beyond the arc … N’Guessan has totaled 37  points and 21 rebounds, while shooting 79 percent (15-19) over the last three games.

Since head coach Steve Forbes took over the reins in 2015-16, ETSU has won the most games in the Southern Conference with 65 victories … UNCG (63), Furman (60) and Wofford (58) are the other top win leaders in league play during this span.

The Bulldogs have dropped their last 12 games and enter Wednesday’s game at 6-17 overall, 0-12 in SoCon play.

The Citadel has dropped nine of its 12 games away from home with the three wins coming against Southeast Missouri State, Marist and Longwood … The Longwood game was the Bulldogs’ last win, coming on Dec. 19, 2019.

Kaiden Rice leads the team in scoring at 13.6 points per game, while he has knocked down a team-best 69 threes … Between Rice and Fletcher Abee, the duo has accounted for 129 of the Bulldogs’ 216 made threes … Rice leads the SoCon in threes made per game (3.0) and Abee is fourth (2.6).

Tyson Batiste ranks third in the conference in assists (5.6) and assist/turnover ratio (2.0), while Kaelon Harris is fourth in rebounding (7.4).

ETSU heads to Lexington, Va. to take on VMI Saturday afternoon at 1 p.m. inside Cameron Hall.