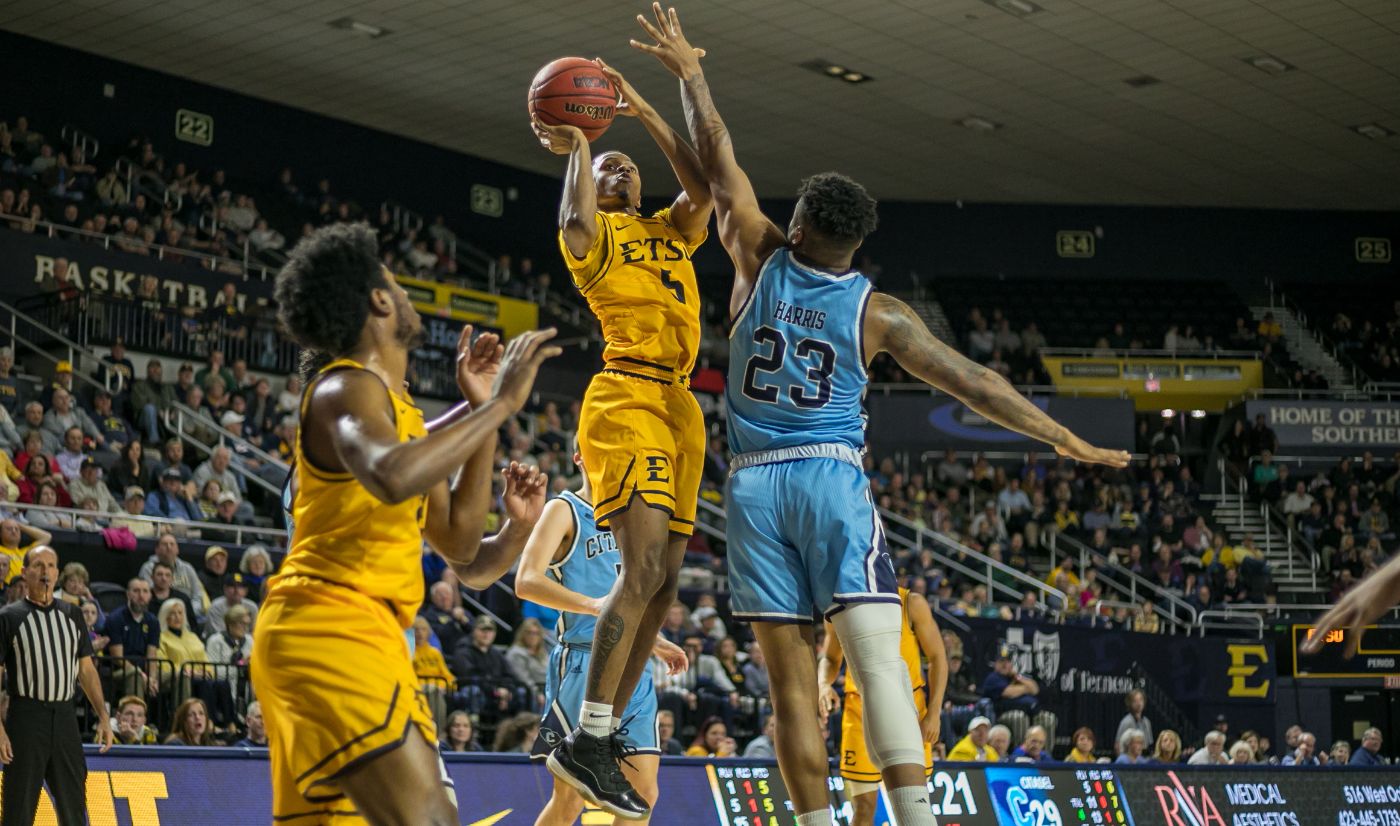 Strong second half lifts ETSU past The Citadel, 91-67
The Citadel at ETSU | February 12, 2020
Related Links

JOHNSON CITY, Tenn. (Feb. 12, 2020) – Strong second halves have become the norm for ETSU men’s basketball since the start of February.

The theme continued as the Buccaneers netted 53 second-half points en route to cruising to a 91-67 win over The Citadel to cap off the season sweep on Wednesday night inside Freedom Hall.

For the game, the Bucs shot 55 percent (33-60), along with dishing out 19 assists (eight turnovers) and out-rebounding the Bulldogs by 16, 38-22. ETSU outscored the visitors from Charleston 21-0 in second-chance points and cashed 14 Bulldog turnovers into 23 points.

With the win, ETSU – who led for over 38 minutes – improved to 22-4 overall and 11-2 in SoCon play to remain tied atop the league standings with Furman. The Bulldogs suffered their 13th straight loss and dipped to 6-18, 0-13.

The Bucs assisted on their first five shots and grabbed a 14-6 lead four and a half minutes into the contest. ETSU eventually led by nine at the 12-minute mark, but the Bulldogs used a 14-6 run to pull within one, 28-27 with just under seven minutes to go in the half. The Bucs never let The Citadel take the lead and ETSU went into the break up six, 38-32.

Williamson and N’Guessan paced the Bucs with eight points each in the first half – N’Guessan going a perfect 4-of-4 from the field. Overall, seven different players reached the scoring column for the Blue and Gold as ETSU shot 55 percent (16-29) from the field and was plus-18 in points in the paint, 26-8.

After the Bulldogs scored the first bucket of the second half to make it a four-point game, ETSU flipped the switch and turned things into a higher gear.

ETSU scored on seven of its first eight possessions and quickly extended its lead to 12, 53-41, when Williamson hit a bucket in the paint at the 15:19 mark.

The Bucs then opened things up by mounting a 14-2 run over four-minute stretch to go ahead 75-53, thanks to Tisdale converting on a three-point-play with 8:07 showing on the clock. ETSU’s lead eventually soared to 28 on two occasions – the final coming when Williamson found Octavion Corley (Reno, Nev.) for a dunk – making it 91-63 with a minute and a half left to play.

The Bulldogs shot 49 percent (24-49) from the field and went 10-of-24 (42 percent) from beyond the arc. Twenty-one of the Bulldogs’ 22 rebounds came on the defensive end with their lone offensive board coming in the final seconds.

The Bucs now go back on the road to take on VMI Saturday afternoon at 1 p.m.  inside Cameron Hall.