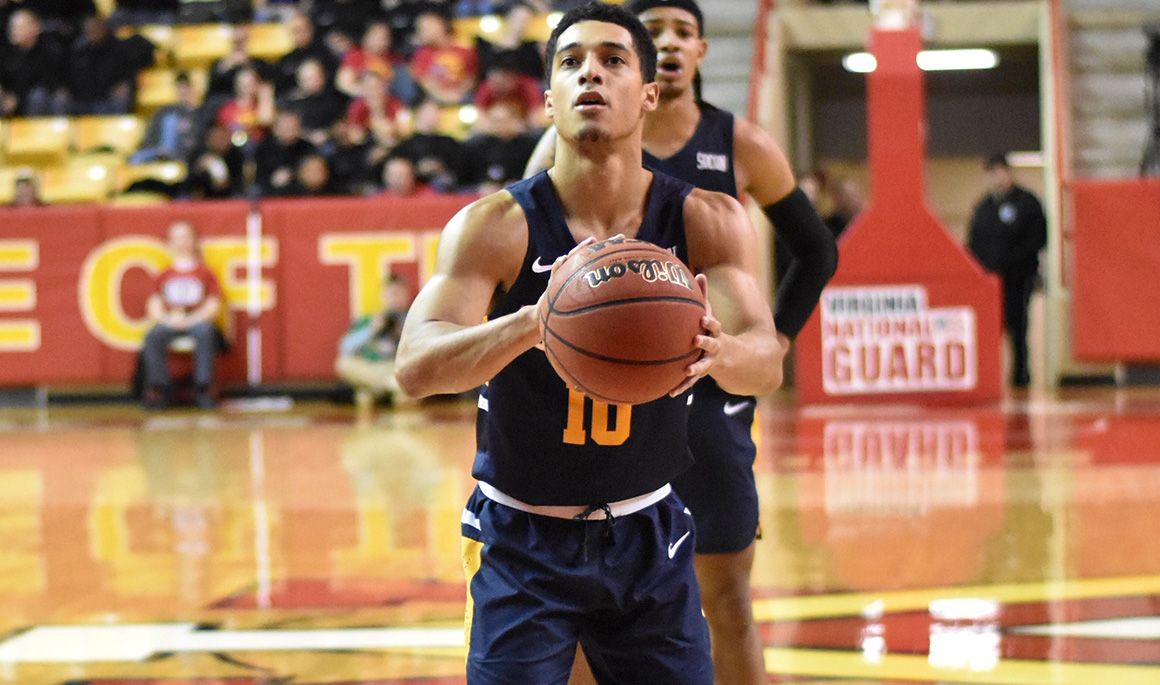 After becoming a dad early Saturday morning, Good helped spark a second-half run as ETSU men’s basketball rallied for a 72-67 win over VMI inside Cameron Hall.

Good, who had been scoreless in five of his last six games, finished with 14 points on 3-of-5 shooting (2-of-4 from three) in 32 minutes. The Johnson City product also went a perfect 6-of-6 at the free throw line.

With the Bucs trailing 50-42 midway through the second half, Good ignited a 12-0 run when Tray Boyd III (Memphis, Tenn.) hit him for a three. Good accounted for five points during the surge, which held VMI scoreless for six minutes – and after the Keydets made a final push down the stretch – freshman Charlie Weber (Owings, Md.) provided the game-winning bucket with an offensive rebound and put back, making it 61-59 with 4:24 remaining. ETSU never trailed after that play and the Bucs made their last nine free throws to secure the road win.

The Bucs, who were without the services of Bo Hodges (Nashville, Tenn.), saw sophomore guard Daivien Williamson (Winston-Salem, N.C.) register his fifth career 20-point game as he totaled 20 points, while going 11-of-11 at the free throw line – the first Buccaneer to make 11 consecutive free throws in a game since T.J. Cromer went 11-of-11 in the 2017 Southern Conference Championship game.

In game that totaled eight ties and 14 lead changes, the Bucs posted their fifth straight win en route to improving to 23-4, 12-2, setting up a key first-place showdown versus Furman at home Wednesday night at 7 p.m. VMI, who has now dropped 10 straight to ETSU, moved to 7-20, 2-12.

The first half was tightly contested as it featured nine lead changes and five ties, but the Keydets took a six-point lead into the break, 38-32.

Neither team led by as many as four in the first 12 minutes, but with the game tied at 18, VMI rattled off six unanswered points to go ahead 24-18 with just over six minutes left in the half. The Bucs clipped the deficit 28-26, but the Keydets scored 10 of the final 16 points to end the stanza.

Williamson led all scorers with 11 points in the opening 20 minutes, as he went 6-of-6 at the free throw line. As a team, ETSU was plus-11 at the charity stripe as the Bucs went 14-of-17, compared to VMI’s 3-of-4 mark. However, the Keydets held the upper hand in three-point shooting as VMI was plus-five. VMI was 7-of-18 from long range, while ETSU went 2-of-10 with Williamson and Boyd accounting for the makes. Overall, the Bucs were 8-of-22 from the field  and VMI went 14-of-30.

VMI extended its lead to nine in the early stages of the second half and led 50-42 with 13:43 remaining, but like they’ve done all year, the Bucs accepted the challenge and found a way to win.

Good’s three at the 13:26 mark ignited the surge and ETSU’s defense held the Keydets scoreless for a six-minute stretch to post its 12-0 run and go ahead, 54-50 with just over eight minutes to play.

The Keydets answered with six straight free throws to go back up two with 6:41 showing on the clock, but again, Boyd found Good for another triple to snap the run.

After the game was tied for the 14th and final time at 59-59, Weber grabbed an offensive rebound and laid one in, putting ETSU ahead, 61-59 with 4:24 remaining. The Bucs never trailed after the Weber bucket and ETSU made nine straight free throws to complete the comeback.