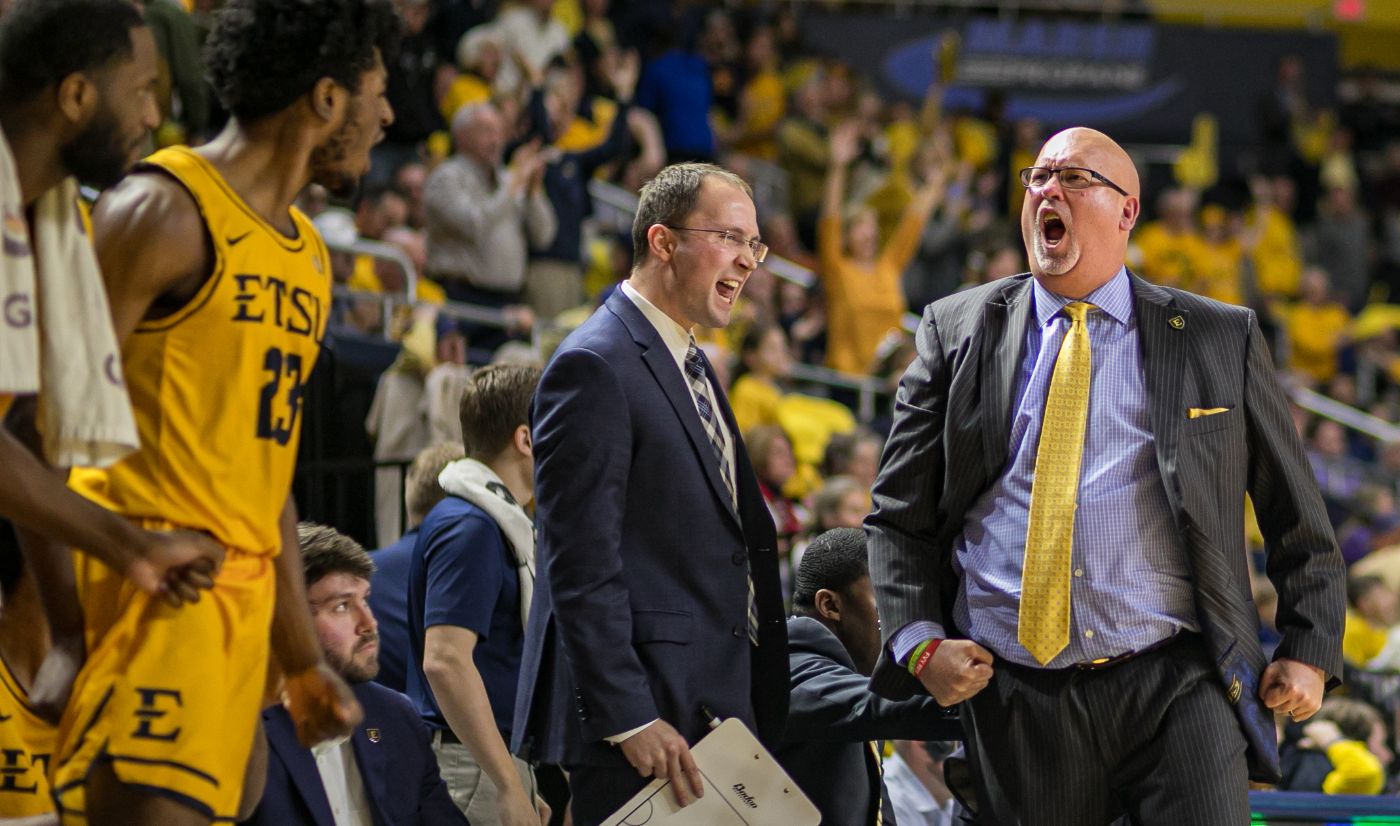 After falling to Furman last month in Greenville, ETSU men’s basketball returned the favor to move into sole possession of first-place in the Southern Conference standings as the Buccaneers defeated the Paladins, 75-66, in front of a record crowd of 6,177 on Wednesday night inside Freedom Hall.

The Bucs, who have now won a season-best six straight games and improved to 24-4 overall, 13-2 in SoCon play, had four players score in double figures with Isaiah Tisdale (Lexington, Ky.) pacing the group with 15 points. Tisdale drew nine fouls, along with adding eight rebounds and four assists in nearly 38 minutes. Bo Hodges (Nashville, Tenn.) finished with 14 points and seven rebounds, while Patrick Good (Johnson City, Tenn.) – who drained three triples in a 1-minute, 12-second span in the second half – ended with 13 points (all in the second half), six rebounds, two assists and two steals. Tray Boyd III (Memphis, Tenn.) capped off the Bucs in double figures after netting 10 points.

As a team, the Blue and Gold shot 48 percent (26-54) from the field, while ETSU’s defense held Furman 11 points below its season average. The Bucs were plus-2 in three-pointers made (8-6) – and after being out-rebounded by 13 in the first meeting – ETSU won the battle on the boards by 18, 42-24.  The Bucs finished with 13 second-chance points on 13 offensive rebounds, as Tisdale led the way with four boards. ETSU also finished plus-10 in bench scoring (22-12) with Joe Hugley (Gaithersburg, Md.) pitching in with seven points and six rebounds, and Vonnie Patterson (Louisville, Ky.) made his lone attempt and grabbed four rebounds. Good led all players in bench scoring. Both teams shot over 75 percent at the free throw line – ETSU going 15-of-20 and Furman finishing 16-of-21.

Furman had its seven-game win streak snapped and moved into a tie for second-place with UNCG at 22-6, 12-3. Neither team has now swept the regular season series since the Bucs did so in 1993-94.

The Bucs opened up hitting on five of their first eight shots en route to taking a 13-5 lead when Daivien Williamson (Winston-Salem, N.C.) extended ETSU’s streak of making at least one three-pointer to 1,029 straight games at the 13:38 mark.

Over the next seven-plus minutes, Furman scored 16 of the next 24 points to pull even at 21, but Boyd answered with his first three, making it 24-21 with 5:24 remaining. The teams went back-and-forth in the final five minutes of the half, but Boyd hit a deep three from the right wing at the buzzer, sending the Bucs into the locker room up, 35-32.

All of Boyd’s points came in the opening half, while the Bucs shot 57 percent (13-23) in the stanza. The Paladins were held to a 39 percent clip (11-28), while both teams netted three three-pointers.

ETSU never trailed in the second half as Furman only closed the gap to two points in the opening four minutes of the frame at, 41-39.

After the Paladins cut it to four with just over 10 minutes to play, Good got in the zone as he drained three consecutive threes over a 1-minute, 12-second stretch, giving the Bucs a 62-53 lead with 7:31 left.

Again, Furman made it a four-point game with just over five minutes remaining, but Hugley answered with an old-fashioned three-point-play, extending ETSU’s lead to seven, 66-59, at the 4:32 mark. The Paladins never threatened, and the Bucs used a 7-2 spurt to take their largest advantage of the night, 73-63, following two free throws by Hodges with 1:17 remaining.

The Bucs dominated the glass in the second half as ETSU was plus-18, 27-9, while holding an 11-1 mark on the offensive end, resulting in 11 second-chance points.

Jordan Lyons, who picked up two fouls in the opening four minutes of the game, fouled out with 4:52 remaining and the Bucs ahead, 65-59. The senior guard led all players with 18 points on 7-of-9 shooting, while Noah Gurley added 14 points (5-of-17 shooting) and Clay Mounce pitched in with 13 points and six rebounds.

ETSU hits the road for back-to-back games beginning Saturday when the Bucs take on Samford at 3 p.m. ET inside the Pete Hanna Center.