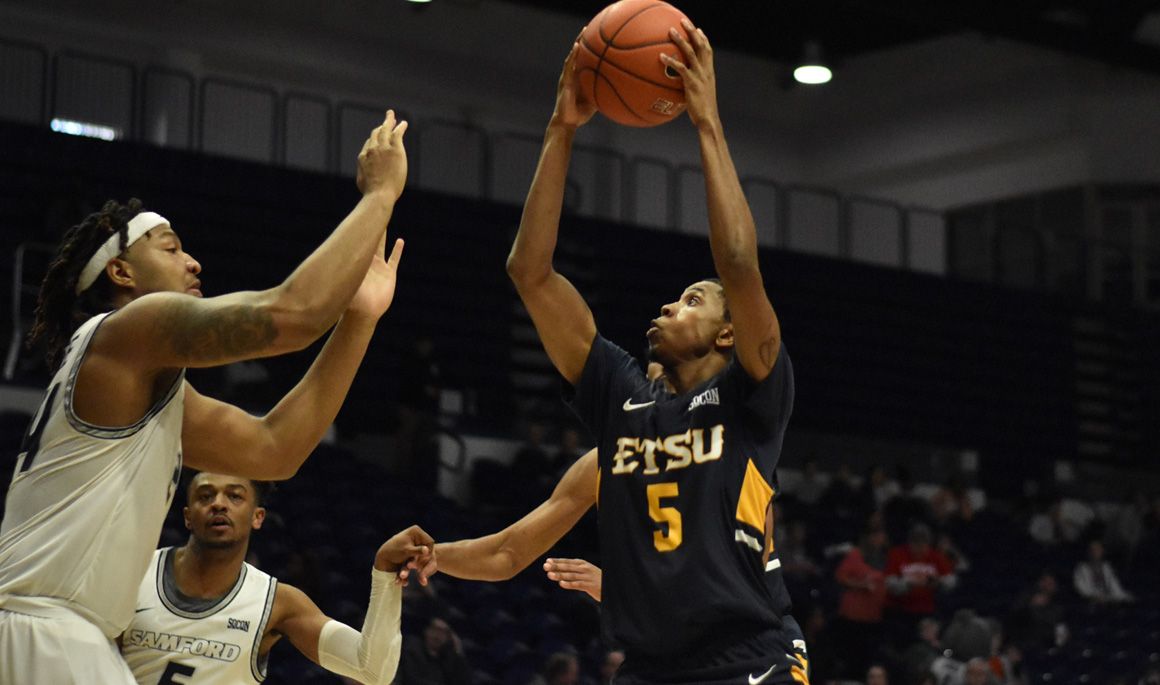 BIRMINGHAM, Ala. (Feb. 22, 2020) – Ten of previous 15 meetings between ETSU and Samford have been decided by nine points or less.

In a game that featured 10 ties and 20 lead changes, senior guard Tray Boyd III (Memphis, Tenn.) provided the dagger by sinking a three-pointer with 14 seconds remaining to help the Buccaneers escape with an 80-74 win over Samford on Saturday afternoon inside the Pete Hanna Center.

ETSU, who improved to 25-4, 14-2 in SoCon play, kept three win streaks alive on Saturday. The Bucs have now a season-best seven straight games, six-in-a-row on the road and 11 consecutive against the Bulldogs. Meanwhile, Samford has dropped 15 of 16 in the series and dipped to 9-21, 3-13.

The Bucs scored 12 of the first 17 points to start the game with a seven-point lead, but after Williamson’s three five minutes into the game, ETSU was unable to expand the margin. Samford responded with an 11-1 run to go ahead, 16-13 with 11:45 remaining. Play was tight for the remainder of the half as the lead changed hands 12 times as well as also totaling five ties, including the fifth tie coming when Boyd knocked down a three at the buzzer, making it 42-42 at intermission.

ETSU shot 48 percent in the first half  (15-31), compared to Samford connecting on half of its 32 attempts. The Bulldogs were also 8-of-12 from beyond  the arc, while ETSU went 5-of-10 as both teams combined for eight made threes in the final 8-minutes, 23-seconds of the frame. Williamson led the Bucs with 10 points, while Robert Allen had 18 on 7-of-12 shooting (3-4 from three) for the Bulldogs.

Boyd’s three-pointer to end the first half carried momentum into the second as ETSU scored the first seven points to go ahead 49-42 three minutes in the stanza. A minute later Tisdale fed Boyd for an open three, giving the Bucs their largest lead of the night, 52-44.

However, Samford charged back by scoring 10 unanswered to regain a 54-52 lead with 11:58 remaining. After the teams traded buckets, the Bulldogs grabbed their largest lead at 65-61 with just under seven minutes to play.

With the Bucs grabbing sole possession of first-place in the conference standings on Wednesday night, they were not going to let it slip away, as ETSU mounted a 13-2 run to go ahead 73-67 thanks to N’Guessan assisting Hodges on a lay-up with 2:10 remaining.

Samford pulled within three when Josh Sharkey connected on his third three with less than a minute to go, but the Bucs didn’t let the Bulldogs get a chance to comeback. After Boyd missed a three with the shot clock winding down, Tisdale skied above the Samford players to tip back the offensive rebound, which set up the final Boyd three to seal the Bucs’ 10th road win of the season.

The Bulldogs shot 49 percent (28-57) from the field and made 12 threes – the  most given up by the Bucs this season. Allen scored a game-high 25 points, while Sharkey added 20 points, nine  assists and five rebounds. The duo combined for six of the 12 made threes.

ETSU plays its final regular season road game Wednesday night as the Bucs head to Spartanburg, S.C. to take on Wofford. Tip-off is set for 7 p.m. inside Richardson Indoor Stadium. A Buccaneer win over the Terriers locks up the No. 1 seed in the SoCon Tournament.