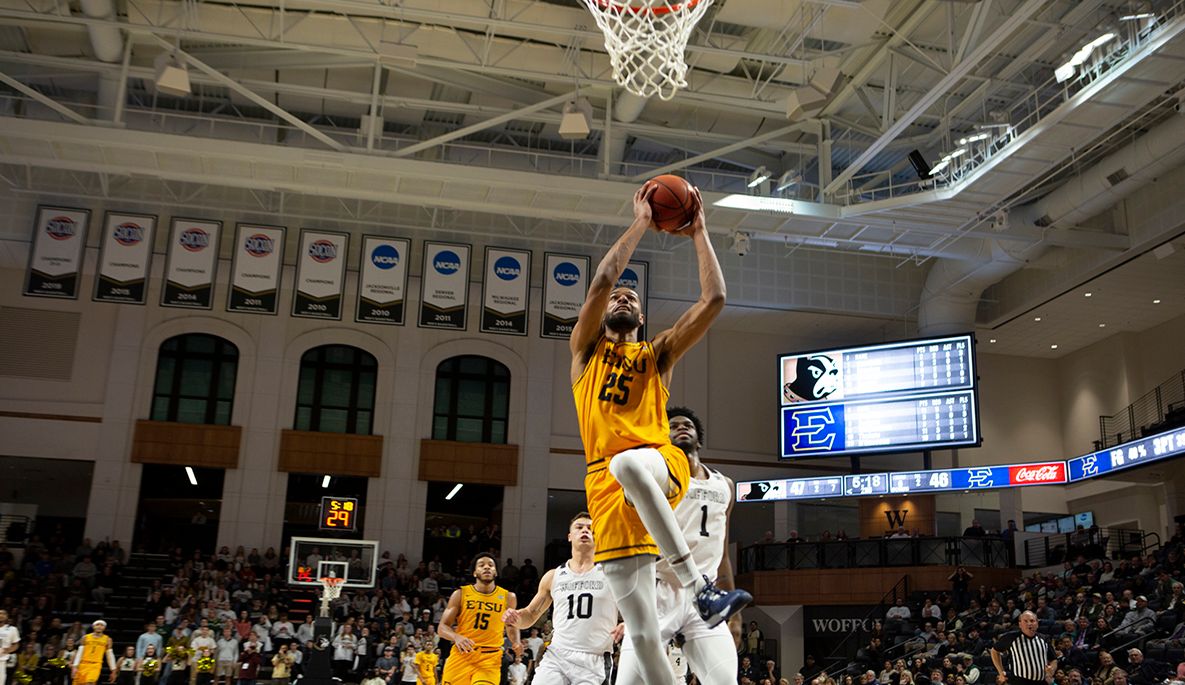 ETSU locks up No. 1 seed in SoCon Tournament

Trailing by 14 points with less than 14 minutes to play, ETSU men’s basketball followed its gritty, grimy, tough, together mentality to capture the comeback. The Bucs outscored Wofford 34-14 in the final 14 minutes to secure the 60-54 road win on Wednesday night inside Jerry Richardson Indoor Stadium.

With the win, ETSU improved to 26-4, 15-2 in SoCon play en route to clinching a share of the Southern Conference regular season crown and locking in the No. 1 seed in next week’s conference tournament in Asheville. The Bucs, who swept Wofford for the first time in conference play, extended their win streak to eight straight games and seven-in-a-row on the road. The 26 wins are tied for the fifth-most in school history, while it’s the second time in four years ETSU has won a SoCon regular season title.

The Bucs will look to clinch the outright title Saturday when ETSU hosts Western Carolina in the regular season finale. Tip-off for Senior Day is set for 4 p.m. inside Freedom Hall.

After a first-half that resembled the defensive battle that was played back on New Year’s Day inside Freedom Hall,  ETSU got hot in the final 20 minutes. The Bucs shot 43 percent for the game (23-54), but went 15-of-23 (63%) in the second half and 5-of-8 from beyond the arc. The Blue and Gold were held to a season-low 19 first-half points, but then outscored the Terriers, 41-25, in the final 20 minutes. Wofford was 11-of-24 in both halves from the field, but after making four threes in the first, ETSU’s defense held the Terriers to 0-of-7 shooting from beyond the arc in the second stanza.

Tray Boyd III (Memphis, Tenn.) led the Bucs with 16 points – including scoring seven of the Bucs’ points during their 18-4 second-half run that tied the game at 44 with exactly eight minutes remaining. Boyd also grabbed five rebounds and tallied four steals. Senior Lucas N’Guessan (De Lier, Netherlands) finished with 12 points and nine rebounds, along with providing the play of the game when he stole Nathan Hoover’s pass at midcourt and finished it with a driving dunk, putting ETSU ahead 48-47 with 5:16 to play – the Bucs’ first lead since 2-0. Isaiah Tisdale (Lexington, Ky.) was solid yet again, as he totaled 13 points, four rebounds and knocked down three of ETSU’s seven triples on the night.

In the first half, ETSU only held the lead once as N’Guessan hit a lay-up at the 17:34 mark, but then the Bucs went cold and Wofford scored 10 unanswered points to lead by eight, seven minutes into the contest. Tisdale stopped the bleeding by hitting a triple and the Bucs eventually pulled within three at 12-9, but that’s as close as ETSU would get. The Bucs were held to nine points for the final 10-minutes, 52-seconds of the half and Wofford took a 10-point lead into the break, 29-19.

The Bucs, who opened up missing 12 of their first 13 shots, went 8-of-31 (26%) from the field in the first half, while Wofford was 11-of-24 (46%). The Terriers were plus-2 from beyond the arc (4-2) and made all three of their free throws, while ETSU went 1-of-2 from the foul line. Sixteen of Wofford’s points came from the bench, compared to ETSU totaling three from its four bench players in the opening stanza.

The Terriers looked to have carried momentum out of the locker room as they extended their lead to 14, 40-26 with 13:49 to play, but the Blue and Gold dug deep and took over.

Boyd’s jumper 30 seconds later sparked the 18-4 run, which spanned 5-minutes and 24-seconds, resulting in a 44-44 tie when Tisdale fed N’Guessan for a lay-up at the eight-minute mark.

Wofford regained a 47-44 lead, but after Boyd hit a jumper, N’Guessan stole Hoover’s pass on the Terriers’ next possession, finishing it with the fast-break slam, making it 48-47 with just over five minutes left.

After Williamson’s three extended the Bucs’ lead to four, Wofford answered with five straight points to go back up one with 2:38 showing on the clock. From there, ETSU executed a play to perfection as Tisdale lobbed one up to Bo Hodges (Nashville, Tenn.) for a reverse alley-oop, putting the Bucs up for good at 53-52. Boyd then hit a three to push the margin to four, while Tisdale and Boyd made the final four free throws in the closing seconds to secure the win.

Messiah Jones scored a game-high 19 points on 9-of-11 shooting, while Hoover – who was one of three Wofford players recognized pregame for Senior Day – finished with 11 points. The Terriers’ bench outscored ETSU, 35-6.

The Terriers suffered their sixth straight loss and moved to 16-14, 8-9 in SoCon play.