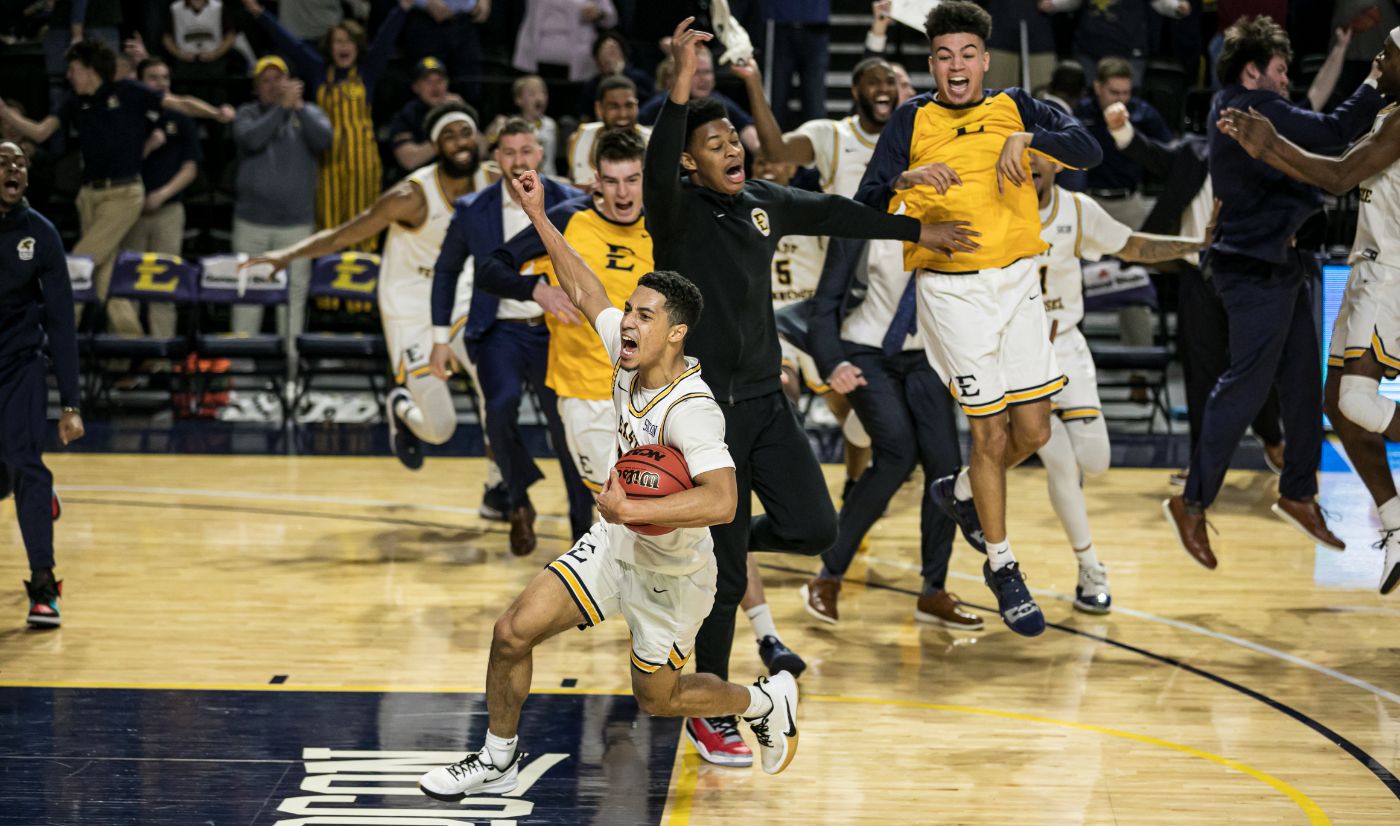 AS GOOD AS IT GETS! Bucs clinch SoCon title outright with epic win over Catamounts
Western Caro. at ETSU | February 29, 2020
Related Links

Good knocked down five threes in the final four-and-a-half minutes – including the game winner with 7.5 seconds remaining – to rally ETSU men’s basketball from a 10-point deficit, as the Bucs defeated Western Carolina, 68-67, to clinch the outright Southern Conference regular season championship.

Good scored 24 of his game-high 26 points in final 7-minutes, 55-seconds – including 17 in the late surge down the stretch to complete the comeback win in the regular season finale. The Johnson City native scored 24 of the final 30 points for the Bucs, as Joe Hugley (Gaithersburg, Md.) made a lay-up at the 7-minute mark, Tray Boyd III (Memphis, Tenn.) provided a tip-in with just under four minutes to play and Bo Hodges (Nashville, Tenn.) put the Bucs ahead 65-64 following a jumper in the paint with 27 ticks remaining.

Just as Hodges gave ETSU its first lead since 24-23 late in the first half, Travion McCray nailed a three from the left wing to put Western Carolina back on top with 12 seconds on the clock. Fortunately, Good – who set ETSU’s single-season three-point record with 11 threes last year at Western Carolina – had one more left in the chamber.

The hometown kid got the pass from senior Isaiah Tisdale (Lexington, Ky.) and knocked down the winning tray from the left wing. The Catamounts had one last chance for the win, but for third time this season, Tisdale – a SoCon Defensive Player of the Year candidate – blocked McCray’s three-point attempt and Good came away with the rebound. After Good did a victory lap with the ball secured in his left arm, he was tackled  by his teammates at the free throw line and the dogpile celebration began before the Bucs cut down the nets inside Freedom Hall.

ETSU capped off the regular season on a nine-game win streak en route to improving to 27-4 overall, 16-2 in SoCon play, both of which are program records. The 27 wins are the most regular season victories and the 16 conference wins tied a program mark. The Bucs, who have now won 27 of the last 28 over the Catamounts, head into next week’s conference tournament as the No. 1 seed. ETSU will face the winner of Friday’s opening round matchup featuring No. 8 Samford/No. 9 VMI Saturday at noon inside Harrah’s Cherokee Center Asheville.

In a game that saw the Bucs score eight of the first nine points and eventually grab their largest lead of the night at 20-8 with just under 10 minutes to play in the first half, things quickly  shifted in favor of the Catamounts for the next 25 minutes.

The Bucs threw a quick punch at the Catamounts coming out of the half as ETSU scored six of the first seven points, cutting the deficit to one, 33-32.

Western Carolina responded with 10 unanswered points to go up 11, while the lead hovered around double digits until the Bucs pulled within five,  51-46, following Good’s second three of the half with 6:42 remaining.

With Freedom Hall rocking, Western Carolina didn’t back down, and again, extended it into double figures, 57-47, when Carlos Dotson hit a lay-up with exactly 4:30 to play.

That’s when Good went unconscious and put the Bucs on his back to complete another come-from-behind victory. Despite trailing 64-57 with under two minutes to go, ETSU scored 11 of the last 14 points to clinch the title outright.

Dotson led Western Carolina with 18 points and nine rebounds off the bench, while McCray added 15 and Onno Steger posted 13 points.

The Catamounts finished the regular season at 18-11, 10-8, and will be the No. 5 seed in the SoCon Tournament. Western Carolina will play No. 4 seed Mercer Saturday at 2:30 p.m., with the winner getting the winner of ETSU-Samford/VMI in Sunday's first semifinal game.