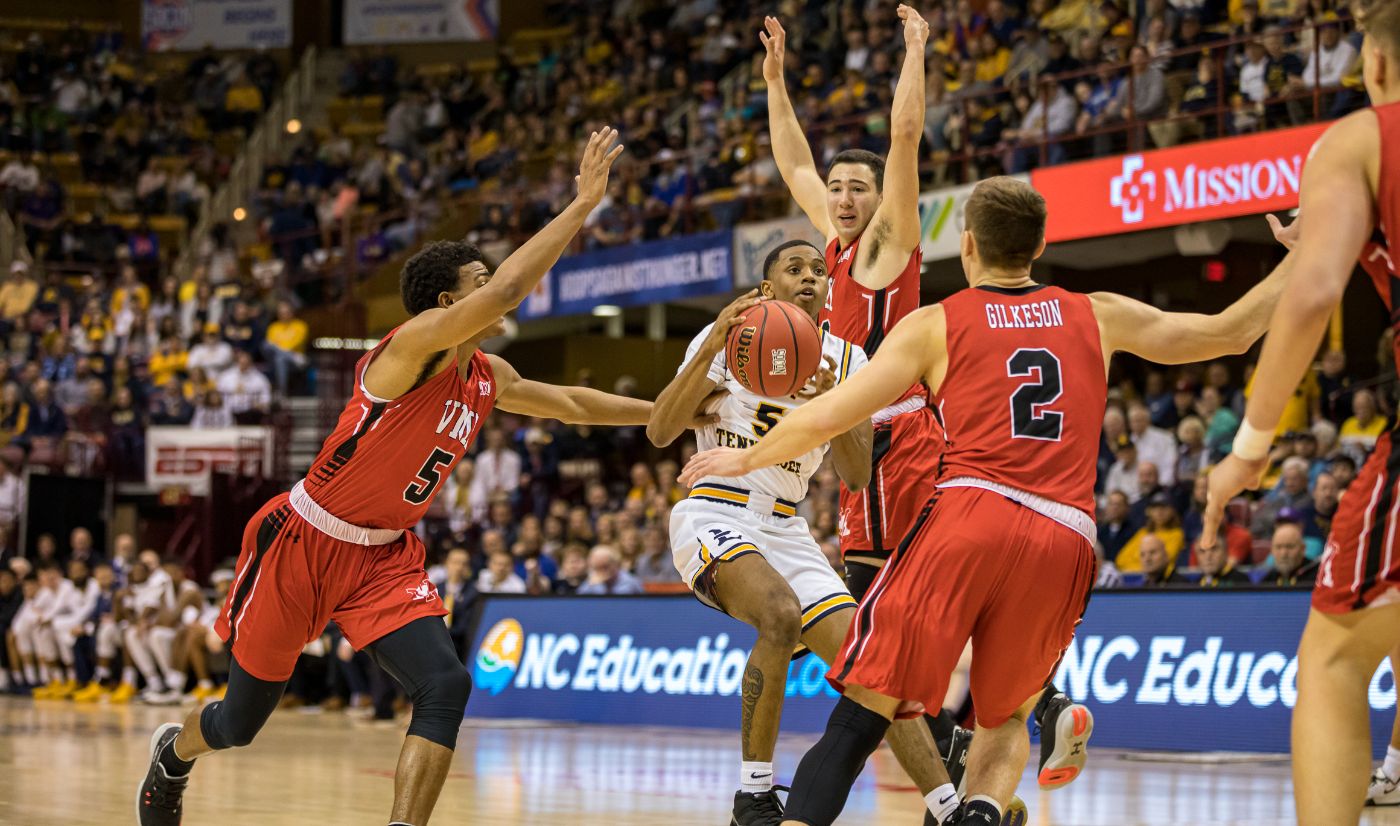 The ETSU men’s basketball team locked in defensively and had plenty of fan support as the top-seeded Buccaneers advanced in the Southern Conference Tournament following their 70-57 win over ninth-seeded VMI in Saturday’s quarterfinal game inside the Harrah’s Cherokee Center Asheville.

The Bucs, who held VMI to 21 first-half points, tied the single-season program record for wins after improving to 28-4 on the season. ETSU extended its win streak to 10 straight games and will now take on No. 4 Western Carolina in Sunday’s first semifinal game at 4 p.m. The Bucs also moved to 56-2 in the Coach Forbes era when holding the opposition to less than 30 first-half points.

Four Bucs scored in double figures with sophomore guard Daivien Williamson (Winston-Salem, N.C.) leading the pack with a game-high 15 points on a perfect 7-of-7 shooting – the best shooting night by an ETSU player since David Burrell went 8-of-8 against Fordham on Nov. 11, 2016. Seniors Tray Boyd III (Memphis, Tenn.) and Isaiah Tisdale (Lexington, Ky.) both pitched in with 12, while Joe Hugley (Gaithersburg, Md.) – who had a personal 9-0 run early in the first half – added 11 points in just nine minutes of action. Tisdale added a team-high eight rebounds, while Boyd, Williamson and Bo Hodges (Nashville, Tenn.) each dished out three assists.

The Buccaneer defense set the tone midway through the first half to take a 12-point lead into the break, 33-21. After the teams traded baskets over the first eight minutes to start the game, ETSU held the Keydets to three field goals in the final 11-minutes, 40-seconds en route to using  a 19-7 run to grab momentum. VMI missed 14 of its final 17 shots, while five different Buccaneers scored points during the run to end the half.

ETSU shot 46 percent (11-24) in the first half, along with netting eight of its 10 free throw attempts, while also outscoring VMI 11-0 in points off turnovers. VMI shot 32 percent (9-28) – and after hitting 11 threes in the first half Friday – the Keydets were held to 3-of-11 from beyond the arc in the opening half.

The Bucs came out of the break hitting their first two shots and quickly pushed their lead to 19, 42-23, when Lucas N’Guessan (De Lier, Netherlands) followed a Boyd miss and laid one in for the first second-chance points of the game at the 17:12 mark of the second half.

ETSU’s offense continued to stay in rhythm as they made seven of its first nine shots of the half and led 48-30 when Patrick Good (Johnson City, Tenn.) found N’Guessan for a dunk.

Over the next eight minutes VMI put some pressure on the Blue and Gold as they clipped its deficit to 12 on four different possessions, and eventually made it a nine-point game, 58-49, following threes from Greg Parham and Sean Conway. After ETSU pushed its lead back into double figures on its next trip down the floor, the Keydets hit another three, making it 60-52, with just over five minutes to play.

However, that’s as close as it got, as the Bucs’ defense held VMI to five points in the final 5:15 and locked up the 13-point win and the 11th straight versus the Keydets.

Parham and Conway accounted for 21 of VMI’s 57 points. Conway finished with 11 points and nine rebounds, while Parham added 10 points and four assists.