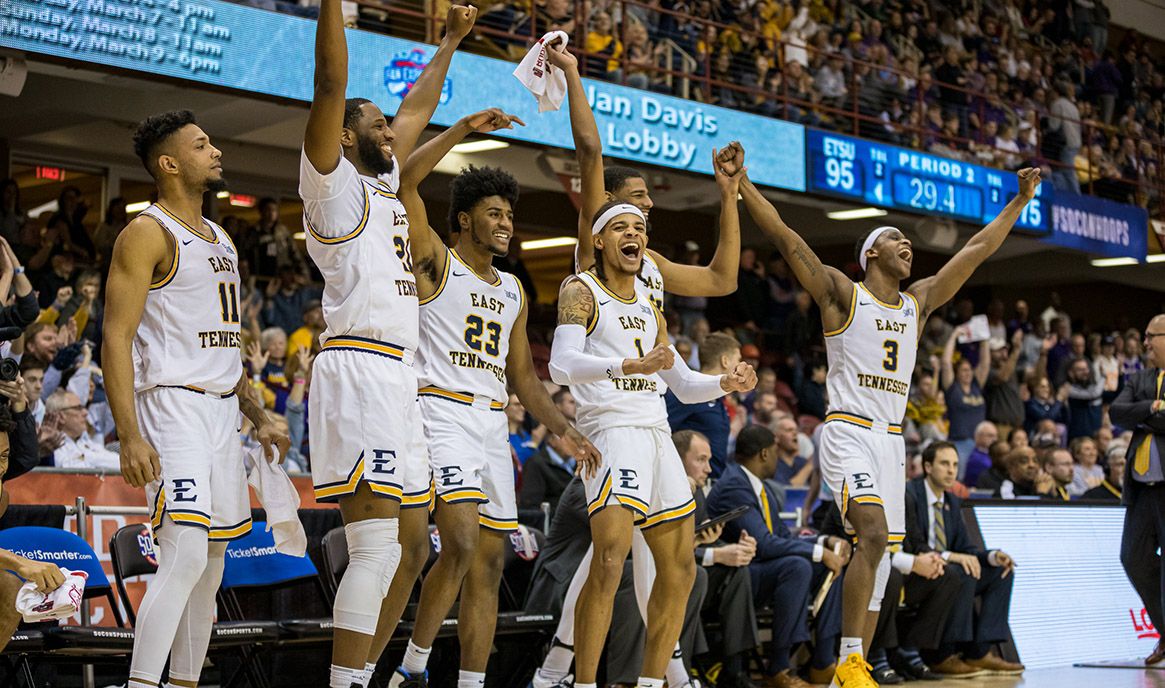 ASHEVILLE, N.C. (March 8, 2020) – From the opening tip the Buccaneers set the tempo and were quickly able to put it into cruise control.

Williamson, who is 14-of-16 shooting in the two tournament games, went 7-of-9 from the field on Sunday, marking his third 20-point performance of the season. Tray Boyd III (Memphis, Tenn.) knocked down four of the Bucs’ eight made threes to total 18 points – his 11th straight game in double figures. Boyd also grabbed six boards and four assists, while Lucas N’Guessan (De Lier, Netherlands) added 12 points (8-of-10 at the free throw line) and six boards. Bo Hodges (Nashville, Tenn.) and Isaiah Tisdale (Lexington, Ky.) each netted 13 points. Hodges, who moved his career total to 999 points, also added six rebounds and dished out four assists.

For the second straight game, ETSU – who made 15 of its final 20 attempts from the field – shot over 50 percent from the field as the Bucs posted a 59 percent clip (34-58). The Bucs also opened the game making 15 of their first 23 shots to lead 44-21 with just under four minutes to play in the first half, while the Blue and Gold got it done at the foul line as they shot 72 percent (21-29). ETSU scored 20 points off 12 Catamount turnovers and was plus-12 in transition scoring, 16-4. The Buccaneer bench produced 21 points as 10 players reached the scoring column in the 22-point win.

Sunday was a historic one as ETSU improved to 29-4, setting the record for most single-season wins in program history. The Bucs enter Monday’s championship game against seventh-seeded Wofford on a season-high 11-game win streak, while also winning 21 of their last 23 games. Monday’s game is set for 7 p.m. on ESPN.

The Bucs sprinted out of the gates by scoring the first seven points and expanded their lead to double figures following a fast-break lay-up by Williamson, making it 18-8 five-and-a-half minutes in.

Western Carolina was only able to inch within seven two minutes later, but a quick 13-2 run resulted in the final blow as ETSU went ahead 33-15 on a lay-up by Boyd at the 6:25 mark.

The Buccaneer faithful was electric and “Freedom Hall South” was rocking as the rout was on.

The Bucs shot 54 percent (15-28) in the opening stanza, while also going 15-of-20 at the charity stripe. N’Guessan, Boyd and Williamson combined for 30 points as they all had 10 at the break. Meanwhile, the Catamounts shot 39 percent (9-23) and turned the ball over nine times, resulting in 15 points for the Bucs.

The Catamounts hit the first bucket of the second half – a three by Matt Halvorsen to make it a 15-point game – but ETSU wasn’t going to give the Catamounts any momentum.

ETSU answered with nine straight points to go up by 24 and the Catamounts never had a chance.

The Buccaneer lead hovered around the 20-point mark for the remainder of the night – and Patrick Good’s (Johnson City, Tenn.) lay-up on a goaltend call at the 14:20 mark – started ETSU’s final run of making 15 of its last 20 shots, locking up the Bucs’ fourth SoCon championship game appearance in the last five years and 12th overall.

Mason Faulkner scored a game-high 29 points for the Catamounts – who moved to 19-12 following their 11th straight loss to the Bucs.