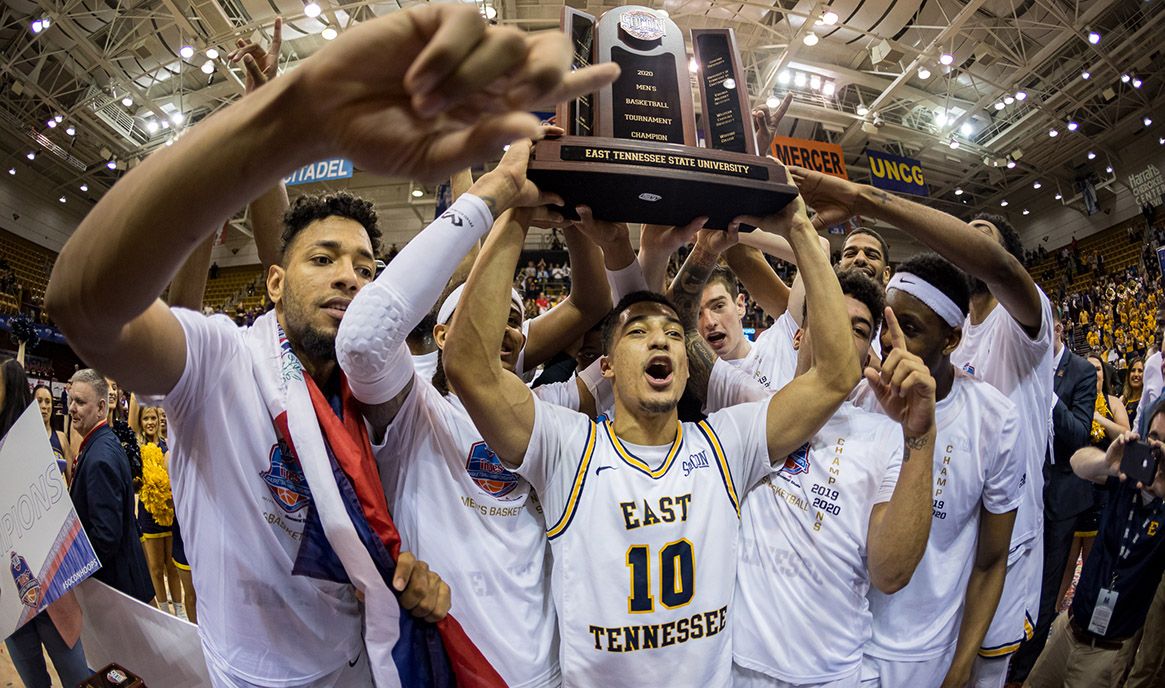 For the second time in the last four years and the 11th time in program history, ETSU is heading to the NCAA Tournament, as the top-seeded Buccaneers defeated the seventh-seeded Wofford  Terriers 72-58 in Monday’s Southern Conference Championship at the Harrah’s Cherokee Center Asheville.

The Bucs, who earned the league’s automatic bid, became the fourth team in the 100-year history of the SoCon to reach the 30-win mark after improving to 30-4 on the season. The Blue and Gold join Wofford (30-5, 2018-19), North Carolina (30-5, 1945-46) and North Carolina State (30-7, 1950-51) as the only teams to accomplish the feat. In addition, the Bucs’ eight SoCon tournament championships are now tied with North Carolina for the fourth-most in league history.

After being snubbed on the all-conference team last week, senior guard Isaiah Tisdale (Lexington, Ky.) earned SoCon Tournament MVP honors after pouring in a game-high 24 points on 5-of-8 shooting (4-of-7 from three). Tisdale also went 10-of-11 at the foul line, marking a new career high for the point guard. Fellow senior guard Tray Boyd III (Memphis, Tenn.) added 11 points, while junior Bo Hodges (Nashville, Tenn.) recorded eight points and eight rebounds. Hodges entered the night with 999 career points and became the 42nd Buccaneer player to join the 1,000-point club when his layup at the 18:01 mark gave ETSU an 8-2 lead. Like he did all tournament long, senior Joe Hugley (Gaithersburg, Md.) provided a spark as he pitched in with eight points and seven rebounds in 13 minutes of work.

ETSU was perfectly balanced as they scored 36 points in both halves, and shot 49 percent from the field (23-47). The Bucs also went 17-of-19 at the free throw line and 9-of-21 from beyond the arc. Defensively, ETSU turned to what got them here all season – shutting down the three-point shooting. After combining for 36 three-pointers in its first three games of the tournament, the Bucs held Wofford to six on 25 attempts on Monday night. Overall, Wofford shot 43 percent (23-53) from the field and was out-rebounded by five, 32-27.

“Last year, we came here and lost to Wofford and I said to you guys we were really good but we weren’t special,” said head coach Steve Forbes, who has now won 130 games in his five-year run as ETSU’s head coach. “I said Wofford was special and they proved it. Tonight, I sit here with a special team. To win 30 games, we are one of only four teams in the 100-year history of this great conference to win 30 games. That's a special deal.”

“I don’t know where we fit in the history of ETSU basketball, but I know this, if there’s a Mt. Rushmore, we’re on it. These guys are just unbelievable. Their togetherness, the fight, resiliency; we fought and popped ‘em [Wofford] in the mouth and they popped us in the mouth and came right back. Jay [McAuley] did an unbelievable job to get them to the finals. I knew they were going to play hard, I think we just wore them down. The great thing about this team is that it's a different guy every game and tonight it was Isaiah Tisdale. Isaiah was phenomenal. He willed us to the win. Joe [Hugley] played with great passion, and Bo [Hodges]. Bo just does everything. I’m really happy for our team and happy for our community. You saw it tonight. They came by the thousands.”

The first half was one of many runs.

ETSU stormed out to an 11-2 start before seeing Wofford rattle off nine straight to pull even at 11 four minutes into the contest. Over the next two minutes, the Bucs responded with six unanswered points, before the Terriers mounted a 13-2 run to take their largest lead of the night, 24-19, with just under eight minutes remaining in the half. From there, the Blue and  Gold scored 10 of the next 12 points to go ahead 29-26 when Tisdale sank three free throws after getting fouled. The game was tied one more time at 29 and the Bucs closed the final two minutes and forty-five seconds on a 7-2 run to go into halftime up, 36-31.

Tisdale led the Bucs in the opening 20 minutes as he scored 16 points on 4-of-5 shooting (3-of-4 from three) and was a perfect 5-of-5 at the charity stripe. As a team, ETSU was 12-of-25 from the field and 6-of-10 from beyond the arc, while Tisdale accounted for five of the Bucs’ six made free throws.

Wofford had one last run in them as it cut its deficit to two in the opening five minutes of the second half, but the Bucs answered with one final punch to take control of the game.

With the score 40-38, ETSU used a 12-2 run to take its first double-digit lead of the night when a Hugley triple made it 52-40 with 10:45 remaining. The Bucs’ lead remained in double-figures the rest of the game and ETSU pushed its margin to 18 (72-54) in the final minute before celebrating with a 14-point victory.

Joining Tisdale on the all-tournament team were Boyd and Daivien Williamson (Winston-Salem, N.C.), while Patrick Good (Johnson City, Tenn.) received the Pinnacle Award for having the highest grade-point-average on the championship team.

Wofford, who swept the regular season and tournament championship a year ago, finished at 19-16 after winning three straight games to make it to Monday’s final. The Bucs handed the Terriers their first-ever loss in a SoCon title game.

The Bucs will now await its destination in the NCAA Tournament as the bracket will be unveiled Sunday at 6 p.m. on CBS.