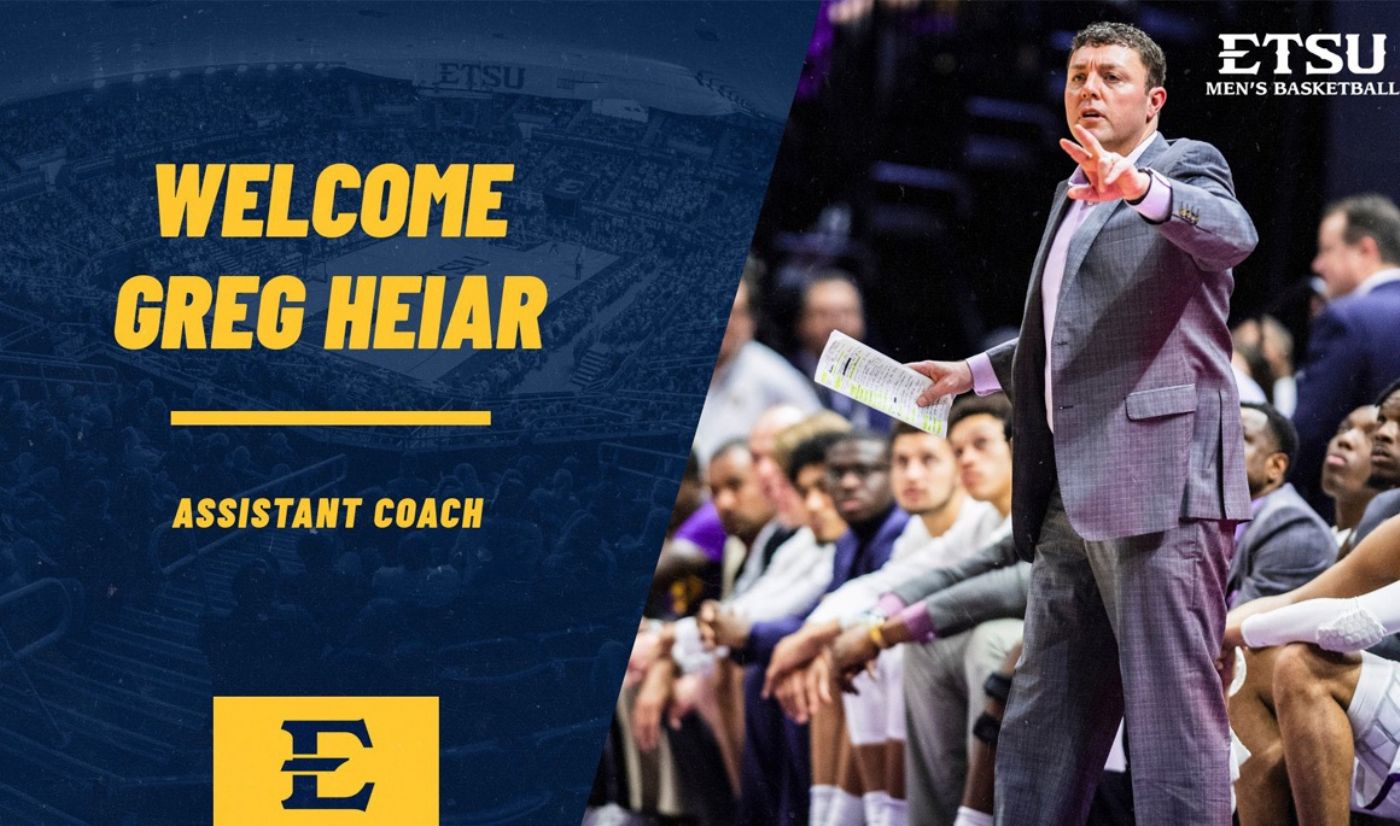 “Greg is a ball coach. He has a proven track record in player development. He loves to be in the gym and help players maximize their potential,” said Shay. “He is tremendous at fostering relationships with the players as well as building those connections on the recruiting trail. More importantly, he brings a winning pedigree to East Tennessee State University.”

Heiar is also excited to join Coach Shay’s staff – a person he has known for over 15 years.

“I’m extremely excited, thankful and blessed for the opportunity to be at ETSU to work for and with Coach Shay and his staff,” said Heiar. “Coming to ETSU presents an opportunity to be at a place where basketball is very important and a chance to coach, mentor and develop a group of student-athletes in a positive way while competing for championships. I’ve known Coach Shay for over 15 years and have always admired his basketball mind, his ability to teach the game, develop student-athletes and connect with people. Jason is a winner. Everywhere he has been, his teams have won.”

In Heiar’s three years at LSU, the Tigers won 67 games, captured the 2019 SEC Championship and advanced to the 2019 Sweet 16. Heiar’s strong recruiting ties helped bolster a Tiger class that ranked No. 4 in the country prior to the 2019 season, while another top 10 class has been signed for this upcoming 2020-21 season. In addition to his strong recruiting connections, Heiar’s on-court coaching helped Tremont Waters – the No. 51 selection in the 2019 NBA Draft by the Boston Celtics – earn first team All-SEC honors in 2019. Meanwhile, Skylar Mays, a two-time All-SEC selection, finished his career in the top 10 in nine different LSU statistical categories.

Prior to LSU, Heiar spent six seasons as an assistant at Wichita State where the Shockers reached historic heights during his tenure. During Heiar’s time with the Shockers, Wichita State won 179 games, five Missouri Valley Conference regular season championships and made six straight trips to the NCAA Tournament, including the program’s second-ever Final Four appearance in 2013. In that Final Four run, the Shockers defeated Pittsburgh, Gonzaga, LaSalle and Ohio State.

Heiar worked extensively with the Shocker backcourt, which saw Ron Baker and Fred VanVleet earn All-American honors, and both eventually signed NBA contracts following the 2016 season. VanVleet, a two-time Missouri Valley Conference Player of the Year, signed with the Toronto Raptors where he won a 2019 NBA Championship, while Baker – who was a top-10 all-time leading scorer at Wichita State – signed with the New York Knicks and also spent a season with the Washington Wizards.

The Shockers were one of the top winningest programs in the country during Heiar’s six-year run as their 179 wins was tied for the third-most nationally only behind Gonzaga (187) and Kentucky (185). Furthermore, Wichita State was also among the national statistical leaders over that six-year stretch:

In his two seasons at Southern Miss, Heiar saw the Golden Eagles post a pair of 20-win seasons, along with reaching the Conference USA semifinals in 2009-10 and making a postseason bid in the 2010 CollegeInsider.com Tournament.

During his six years at Chipola Junior College – the last five as a head coach – Heiar’s teams won 164 games as a head coach, while capturing five Panhandle Conference titles and making four appearances in the National Junior College Tournament. Heiar led Chipola to a third-place finish in 2009 when his team posted a 35-2 record. Overall, Heiar earned five Panhandle Conference Coach of the Year and four Regional VIII Coach of the Year honors. The successful run led to Heiar coaching 40 all-conference players and sending 39 players to Division I programs.

Heiar, a native of Dubuque, Iowa, is married to his wife, Jessica, and they have one daughter, Alexis.