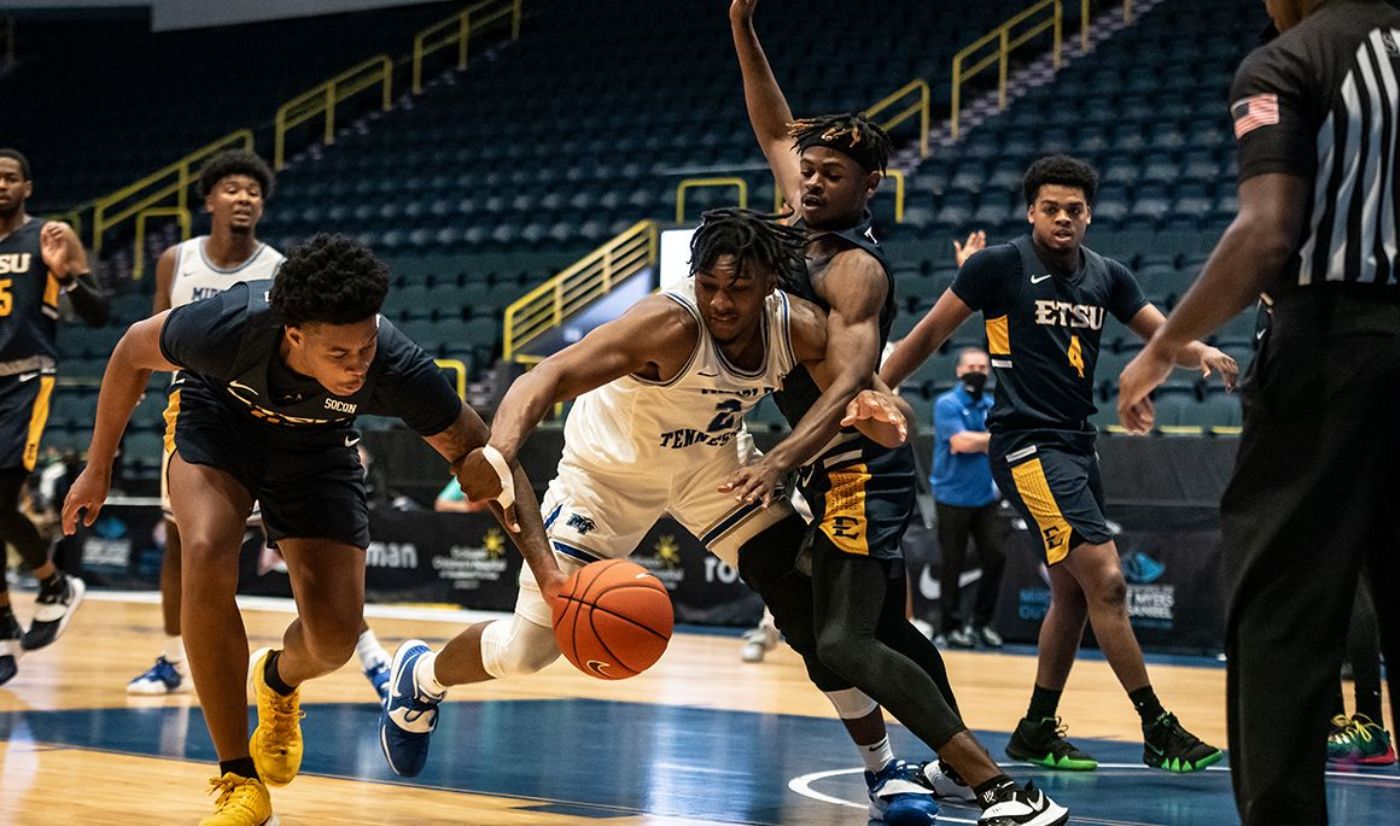 The ETSU men’s basketball team forced 27 turnovers – scoring 25 points off those MTSU mistakes – and closed the game on a 30-13 run en route securing the Bucs’ first win of the Jason Shay era as the Blue and Gold defeated the Blue Raiders, 57-43 on Friday from #BeachBubble Gulf Coast Showcase inside Hertz Arena.

The first half was tightly contested as neither team led by as many as four points. The Bucs started with buckets on back-to-back possessions from Adheke and David Sloan (Louisville, Ky.) to take the early lead, but the Blue Raiders answered by scoring 12 of the next 16 points to go ahead, 12-8 with 11:48 remaining in the half. From there, the teams combined for four ties  and five lead changes before a steal by Smith led to a Ledarrius Brewer fast-break dunk, giving ETSU the 24-22 lead at the break.

Both teams took 28 shots in the opening 20 minutes with ETSU making nine field goals and MTSU putting eight through the net. The Bucs’ three-point streak was in jeopardy as they missed all 10 attempts, while the Blue Raiders were slightly better at 2-of-13.

MTSU started the second half by scoring eight of the first 11 points to regain a 30-27 lead at the 15:18 mark, but a second three-pointer by Ledarrius Brewer eight seconds later ignited the Buccaneer run. The Blue Raiders were able to pull back even at 32, but a steal by Vonnie Patterson (Louisville, Ky.) resulted in a fast-break score from Marcus Niblack (Leesburg, Fla.), putting  the Blue and Gold back ahead, 34-32, with just over 10 minutes to play. Thanks to the Bucs’ stifling defense they never relinquished their lead and eventually extended the margin to 15 (55-40) following a pair of free throws by Ledarrius Brewer with 50 seconds left on the clock. The key plays in the late Buccaneer run featured back-to-back steals and dunks – the first via a steal and outlet pass to Ty Brewer and then the Brewer combo added the second when Ty hit Ledarrius for the dunk in transition – pushing ETSU’s lead into double figures for the first time at 42-32. The back-breaker came just over a minute later when Sloan nailed a deep three as the shot clock hit zero, making it 45-34 with 5:06 showing on the clock.

ETSU returns to action on Dec. 8 when the Bucs head over the mountain to face UNC Asheville inside the Harrah’s Cherokee Center. Tip-off is set for 7 p.m.