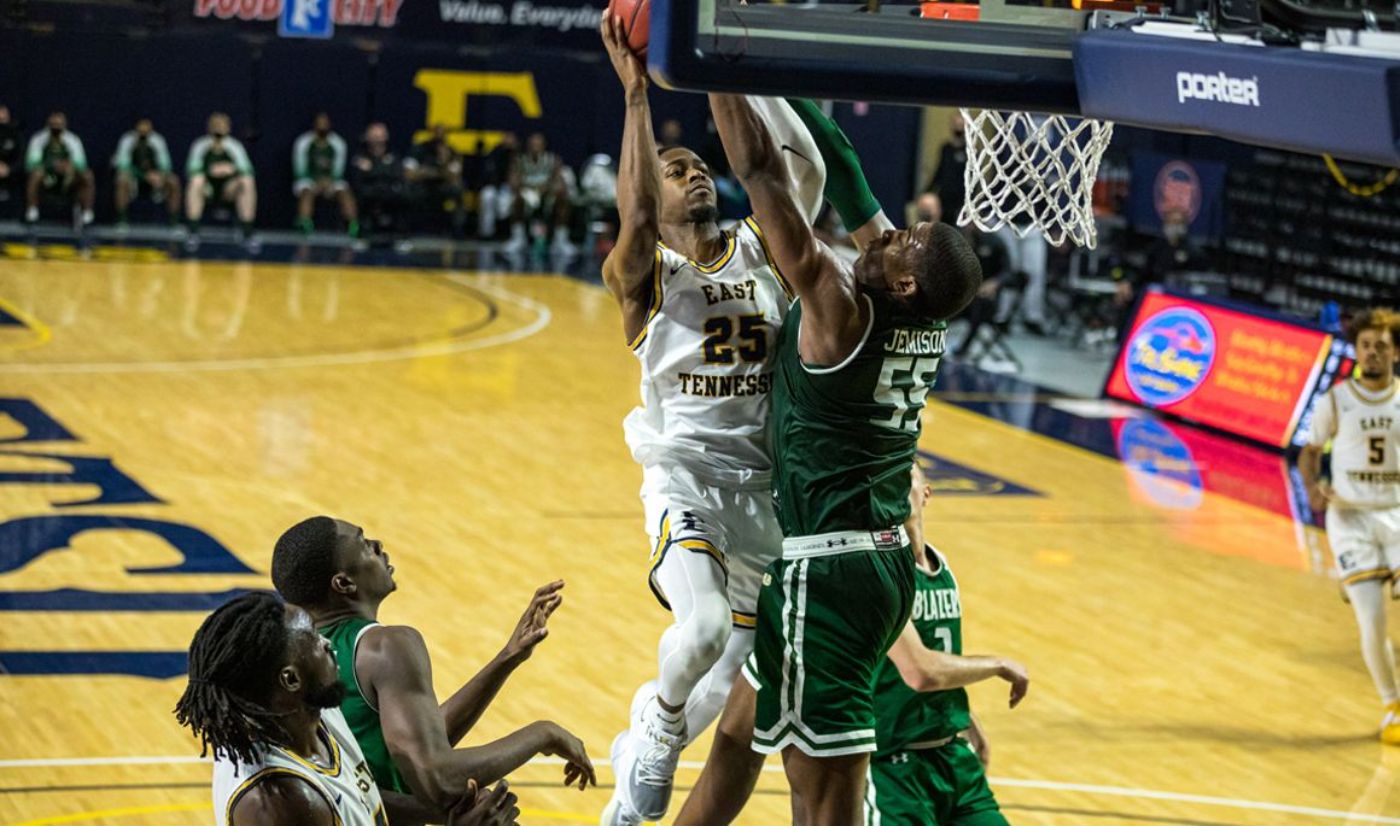 JOHNSON CITY, Tenn. (Dec. 12, 2020) – Ledarrius Brewer (Meridian, Miss.) and Silas Adheke (Lagos, Nigeria) combined for 28 points and 20 rebounds, but it wasn’t enough to propel the ETSU men’s basketball team past UAB in its home opener as the Blazers held on for a 65-61 win on Saturday inside Freedom Hall.

ETSU, who had won its last six home openers, moved to 1-3 on the season, while UAB improved to 6-0.

Free throw shooting haunted the Blue and Gold as they went 14-of-23 at the line (61%), compared to UAB knocking down 14 of its 18 attempts. The Bucs made three of their four at the charity stripe in the first half but went 11-of-19 in the second stanza. Ty Brewer (Meridian, Miss.), Serrel Smith (St. Petersburg, Fla.) and David Sloan (Louisville, Ky.) combined to go 11-of-14 at the line.

ETSU was plus-3 on the glass (42-39), while both teams grabbed 12 offensive rebounds but UAB held a plus-4 advantage in second-chance points, 12-8.

After the Bucs limited UAB to 22 first-half points, the Blazers outscored ETSU, 43-36 in the final 20 minutes.

Brewer led the Bucs with 18 points on 7-of-14 shooting, while he grabbed nine rebounds and blocked three shots.

Adheke, who was a perfect 4-for-4 from the field, registered the second double-double of his collegiate career as he finished with 10 points and 11 rebounds. The Buccaneer forward also blocked three shots.

Michael Ertel led UAB with 19 points on 8-of-16 shooting and Jalen Benjamin scored 16 points off bench, including hitting four of the Blazers’ six made three-pointers.

After being held scoreless for the first minutes of the game, the Bucs rattled off seven straight points in a 55-second span to go ahead, 7-4, following the first of four made threes by Ledarrius Brewer at the 13:54 mark. ETSU eventually saw its lead grow to six when Sloan found Patterson in transition for the lay-up, but a 9-2 UAB spurt put the Blazers back ahead, 18-17 with just over five minutes left before intermission. The teams traded three leads over the final five minutes and the Bucs scored six of the final eight points to end the half, taking a 25-22 lead into the break.

UAB used its 14-4 run out of halftime to take its largest lead at seven, 36-29. The Blazers’ led by seven on three more possessions, but with the visitors ahead 43-36, the Bucs battled back to tie the game at 49 following a three-pointer by Ledarrius Brewer with just under six minutes to go. The Blazers scored four unanswered after the Brewer triple, but Ledarrius stepped up with another clutch three with just under a minute to play, tying things again at 59. However, on UAB’s next trip down the floor, a second-chance opportunity made the Bucs pay as Tavin Lovan grabbed an offensive rebound following a blocked shot by Brewer and found Benjamin open for the eventual game-winning three, putting the Blazers back up, 62-59. From there, Sloan hit a pair of free throws on the Bucs’ ensuing possession – and after UAB went back up three on a lay-up – Ledarrius Brewer was open in the corner for a potential winning three-pointer with seven seconds remaining, but Quan Jackson altered his shot and the Blazers held on for their sixth straight win.