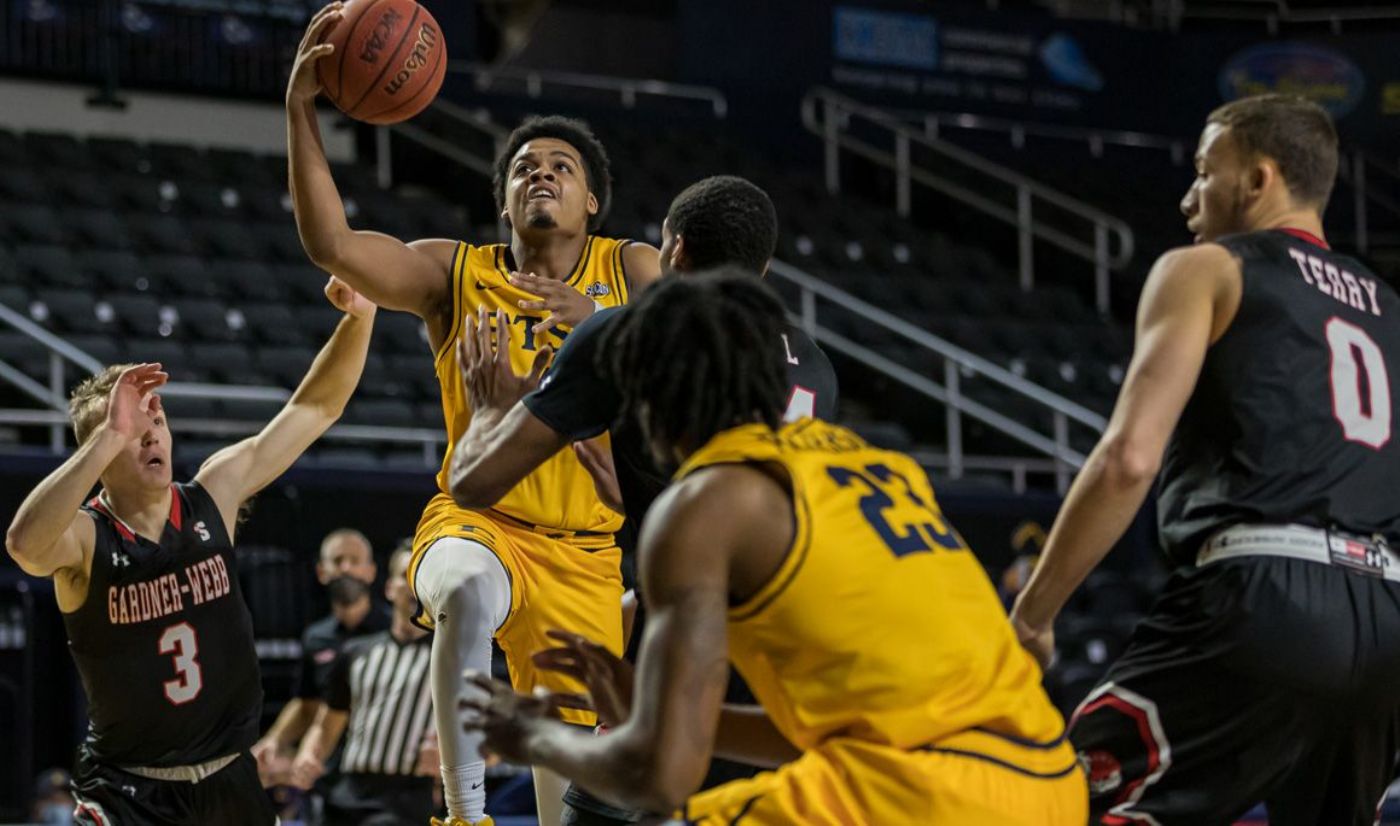 The Bucs, who were coming off a tough four-point loss to UAB on Saturday, improved to 2-3 on the young season, while Gardner-Webb dropped its third straight game to start the campaign.

The Blue and Gold knocked down a season-high 10 three-pointers and dished out a season-best 17 assists on their 22 made field goals. The Bucs also went 11-of-15 at the free throw line.

For the fourth time this season, the Buccaneer defense held their opponent under 40 percent shooting as the Runnin’ Bulldogs posted a 38.5 clip from the field (20-52). Eleven of Gardner-Webb’s 20 made field goals came from beyond the arc.

ETSU committed a season-low 12 turnovers, including just two in the second half.

Sloan scored 16 of his 18 points in the second half where he was 4-of-6 from the field and registered five of those season-high seven assists. The Louisville, Ky. native also made three of his four three-point attempts in the final stanza and went 5-of-6 at the free throw line.

Sloan and Brewer accounted for six of the Bucs’ 10 made threes as they both netted three each.

Neither team grabbed much breathing room in the first half as Gardner-Webb led by as many as five points, while the Bucs’ largest margin was two. Gardner-Webb jumped out to its largest lead five and a half minutes into the contest at 11-6, but the Blue and Gold answered with a 6-1 run to pull even at 12, courtesy of a fast-break dunk by Ty Brewer (Meridian, Miss.) at the 11:08 mark. Again, the Runnin’ Bulldogs pushed their lead back to five (22-17) with just over six minutes left before halftime, but ETSU used a quick spark over the next minute – scoring nine of the next 11 points – to go ahead, 26-24, after Sloan found Monsanto open for a triple. However, the Bucs scored two points over the final five minutes and Gardner-Webb took a 30-28 lead into the locker room.

The first six minutes of the second half saw five lead changes, but with the visitors from Boiling Springs, N.C. ahead 40-39 with 13:23 remaining, the Bucs made their move.

Over a 2-minute stretch, ETSU rattled off 10 unanswered points to take its largest lead of the night, 49-40, when Sloan hit Marcus Niblack (Leesburg, Fla.) for his first collegiate three-pointer with just over 11 minutes to play.

The Bulldogs didn’t back down as they used an 11-3 run to pull within one, but another Buccaneer surge extended their lead.  ETSU mounted a 10-2 run over the next five minutes to regain another nine-point advantage, 62-53, with 2:44 left on the clock. Gardner-Webb inched within four in the final minute, but Sloan made three of his final four free throw attempts in the closing seconds to solidify the win.

The Bucs were scheduled to face USC Aiken Thursday night at 7 p.m., but due to COVID concerns within the Pacers program, they will be unable to play. ETSU is currently working on details for a new opponent on Thursday. Please stay tuned to ETSUBucs.com for more information as it becomes available.