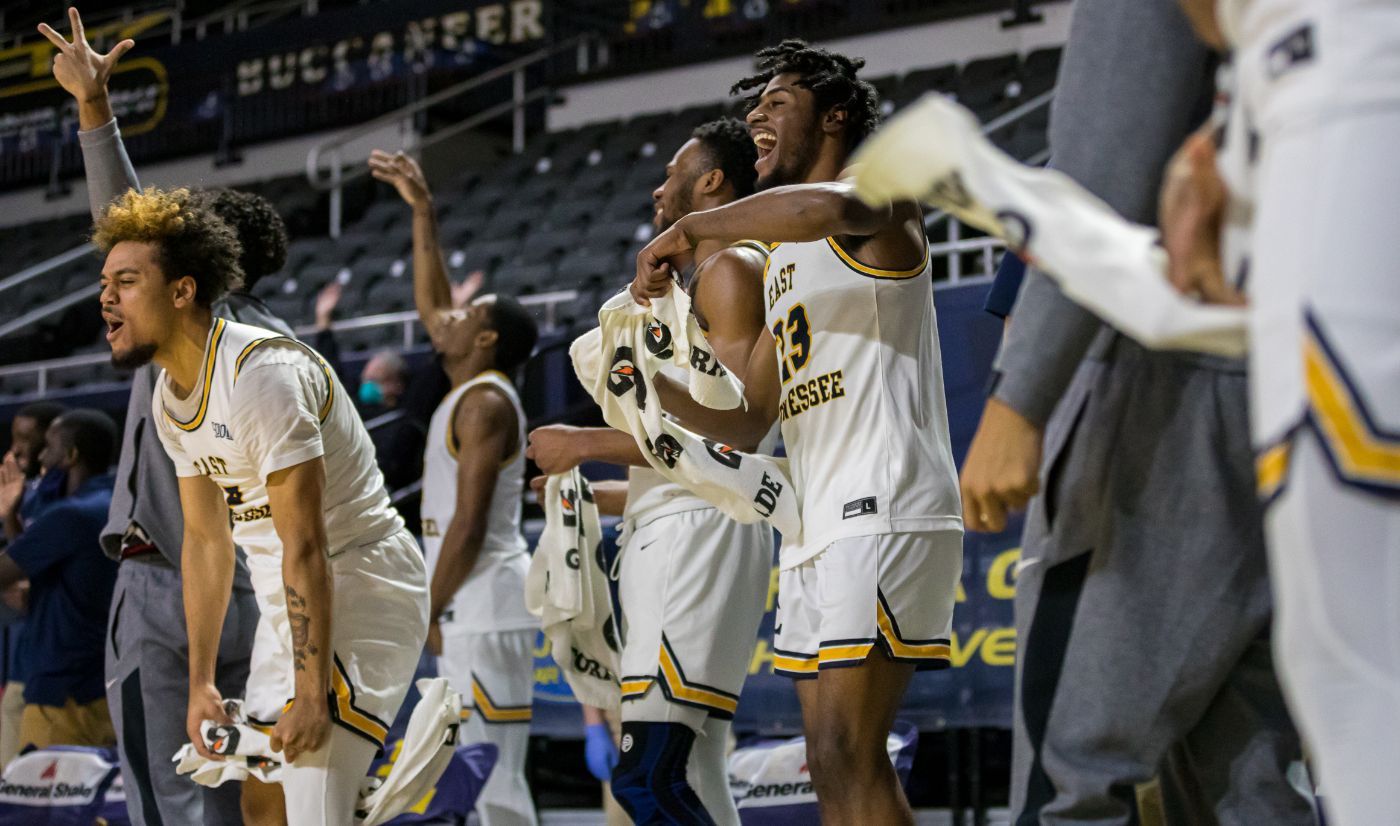 Four Buccaneers scored in double figures, including Ledarrius Brewer (Meridian, Miss.) finishing with a game-high 19 points, and ETSU cruised to a 96-54 win over Columbia International on Thursday night inside Freedom Hall.

The Bucs, who scored a season-high 96 points, won their second straight game en route to improving to 3-3 on the season. ETSU has now won its last 66 games against non-Division I opponents. The Blue and Gold are averaging 96.4 points per game during this stretch, while winning by 35.2 points.

The Buccaneer bench totaled a season-best 46 points, while 11 different players reached the scoring column, including Jordan Coffin (Knoxville, Tenn.) making his first collegiate three when he banked one in, making it 89-52 with 2:48 left in the game.

The Bucs were plus-15 on the glass (40-25) and scored 13 second-chance points off seven offensive rebounds.

ETSU’s defense continued its dominance as they held the Rams to 32.8 shooting (19-58) and scored 20 points off 17 turnovers. It was the fifth straight game the Bucs held their opponent under 40 percent shooting.

Monsanto, who made his first collegiate start, was 4-of-6 from the field and registered five rebounds, two assists and two steals.

Ledarrius Brewer (7-of-9 shooting) made his first three shots and gave the Blue and Gold the 13-0 lead three minutes and 13 seconds into the contest. Brewer also finished with three rebounds, three steals and two assists.

Corey Benton, who entered the night averaging over 26 points per game, led the Rams with 11 points.

The Bucs exploded out of the gates as they scored the first 13 points and pushed the lead to 16, 21-5, after David Sloan (Louisville, Ky.) found Ledarrius Brewer in transition for a jumper five minutes into the contest. After the Rams cut the deficit to nine, ETSU took over for a 7-minute stretch as they mounted a 16-3 run to open a 22-point lead, 37-15, with 6:27 remaining in the half. The Bucs controlled the remainder of the frame and took a 26-point lead into the break, 54-28.

ETSU shot 61.1 percent (22-36) from the field in the opening 20 minutes, while also making eight of its 13 three-point attempts. Brewer led the Bucs with 13 points, while ETSU outscored Columbia International in the paint, 24-6.

ETSU pushed its lead to 30 in the opening minute of the second half – and after the Rams cut it 22 – the Bucs scored 21 of the next 25 points to go up by 85-46 following a Truth Harris (Mount Vernon, N.Y.) three-pointer with just under six minutes to play. The Blue and Gold took their largest lead of the season when Harris assisted on a Smith three-pointer with under a minute to go, making it 96-52.

ETSU wraps up its season-long four-game homestand Saturday when the Bucs host Lee University. Tip-off is set for 4 p.m.