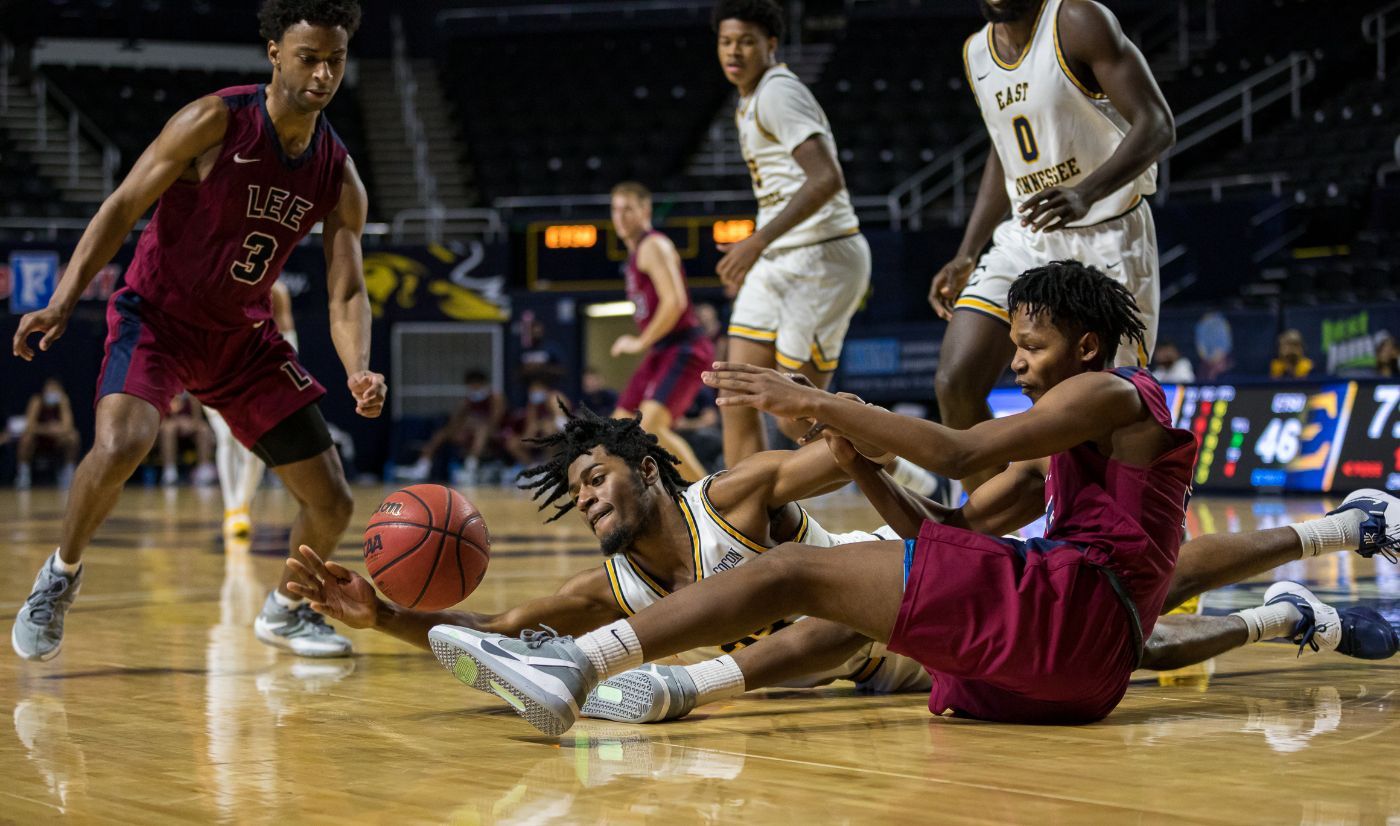 JOHNSON CITY, Tenn. (Dec. 17, 2020) – Trailing by one with just over five minutes remaining, the ETSU men’s basketball team closed the game on a 14-4 run and survived a scare from Lee University, as the Bucs ended their homestand with a 62-53 win over the Flames on Saturday inside Freedom Hall.

ETSU won three of four during the homestand that featured the games played over an eight-day stretch as the Bucs improved to 4-3 on the season.

The Bucs kept a trio of streaks alive on Saturday as the Blue and Gold have now three straight games, 17 consecutive over in-state foes and 67 in a row over non-Division I opponents.

Again, ETSU turned to its defense to secure the win as the Bucs held Lee to 34.0 percent shooting (18-53), while also holding the Flames to one made field goal in the final five minutes and forty-nine seconds. Overall, in the second half, ETSU limited Lee to eight made field goals and 29.6 shooting clip from field.

The Blue and Gold outscored Lee 18-0 in points off turnovers.

Damari Monsanto (Pembroke Pines,  Fla.) and Vonnie Patterson (Louisville, Ky.) were the only two players to score in double figures for the Bucs. For the second straight game, Monsanto finished with 11 points and Patterson tied his season high with 10.

Ledarrius Brewer (Meridian, Miss.), who had scored in double figures in his first six games, ended with nine points and eight rebounds, tying him for the team lead. Silas Adheke (Lagos, Nigeria) also grabbed eight boards to go with his eight points on a perfect 3-of-3 shooting – raising his shooting percentage to 70.4 percent on the season.

The Bucs came out hitting their first three shots to take a 7-0 lead, but a shooting funk set in as ETSU missed its next seven attempts, allowing Lee to pull within one, 7-6, at the 14:46 mark. After the Flames made it another one-point game seven minutes later, the Bucs answered by scoring the next seven to take their largest lead of the half, 27-19, following a Monsanto three-pointer with just over six minutes to play in the frame. ETSU held a pair of eight-point leads in the final minutes of the half but a Lee three-pointer in the closing seconds pulled the visitors from Cleveland, Tenn. within five at the break, 33-28.

For the half, the Bucs shot 44.8 percent (13-29), but only made two of their 11 three-point attempts and went 5-of-11 at the charity stripe. Patterson led all players with nine points.

Both teams went scoreless for the first two minutes to start the second stanza, but a lay-up by the Flames made it a three-point game with 17:47 remaining. The Bucs looked to have gained momentum as they used a 9-2 run to take their largest lead of the night at 42-32, near the midway point of the frame; however, Lee – who was playing its second game of the season – had some fight left in them. Over the next six minutes, the Flames scored 17 of the next 23 points to take their first lead of the game when Kennedy made the second free throw, putting Lee up 49-48 with 5:09 remaining. On the Bucs ensuing possession, an offensive rebound by Adheke led to Ledarrius Brewer finding Smith open for a three-pointer, leading to an ETSU timeout at the 4:43 mark. The timeout by Coach Shay sparked some energy as the Blue and Gold clamped down on the defensive end – limiting Lee to just four free throws down the stretch – and the Bucs were able to pull away for the nine-point win.

ETSU concludes non-conference play Tuesday night when the Bucs head to Tuscaloosa to take on Alabama at 7:30 p.m. ET.