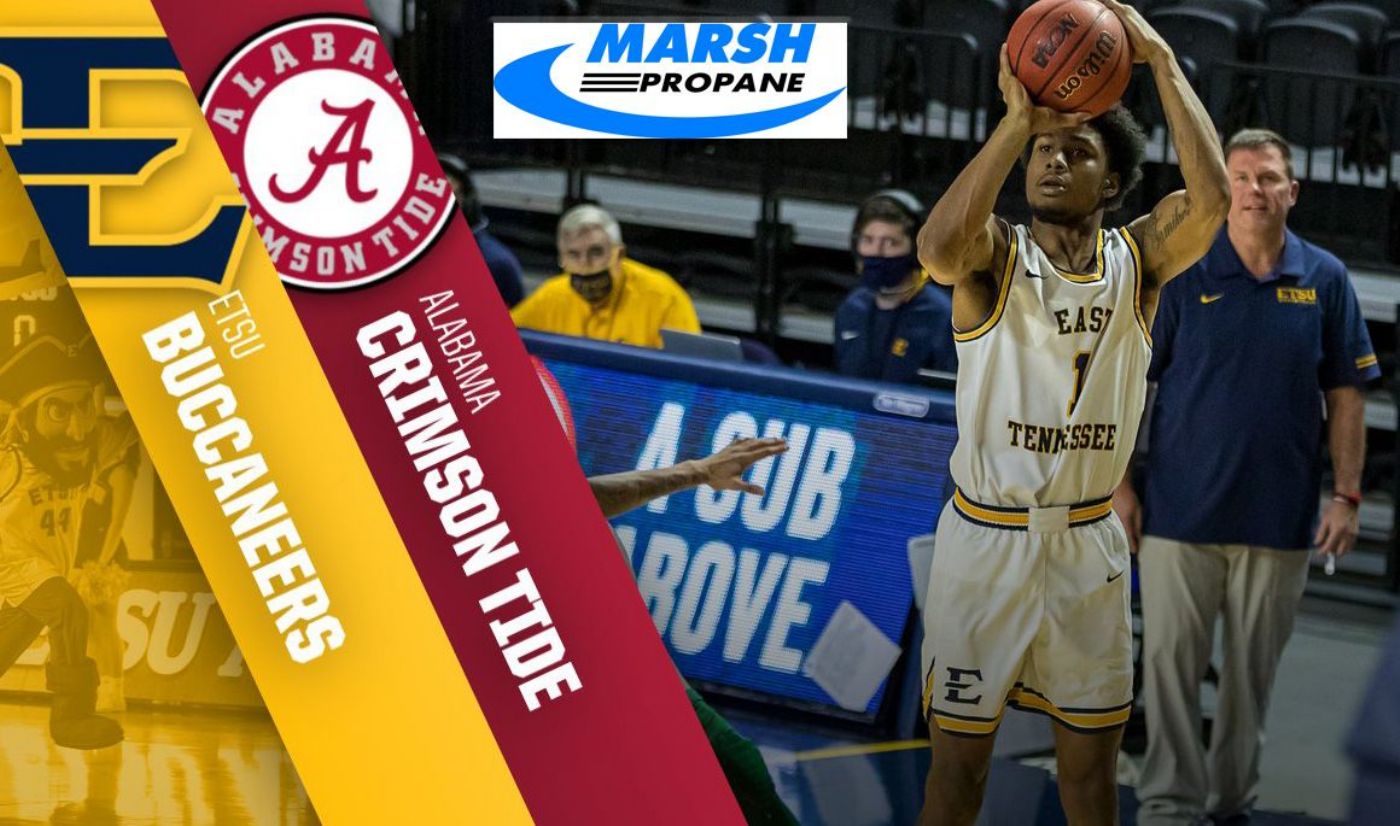 JOHNSON CITY, Tenn. (Dec. 21, 2020) – After capping off its homestand with three straight victories, the ETSU men’s basketball team looks to carry its winning ways on the road as the Buccaneers cap off non-conference play Tuesday night at Alabama. Tip-off is set for 7:30 p.m. ET inside Coleman Coliseum.

Fans can follow all of the action live on WXSM-AM 640 The Extreme Sports Monster as “Voice of the Bucs” Jay Sandos will provide the radio call, beginning with the Atmos Energy Pregame Show at 7 p.m. on the Buccaneer Sports Network. CLICK HERE FOR LIVE AUDIO

Tuesday’s game will be streamed live on SEC Network+ with Roger Hoover and Trevor Releford on the call; CLICK HERE FOR LIVE VIDEO

Live stats will also be provided on SideArm Stats via Rolltide.com… Fans can access live stats on their computers or mobile devices by clicking here

The Bucs used a late run to secure their third straight win as ETSU defeated Lee University 62-53 on Saturday inside Freedom Hall.  With the win, ETSU moved to 4-3, marking its first time being above .500 this season

Following Saturday’s win the Bucs have now defeated 67 straight non-Division I teams, while extending their win streak to 17 consecutive over in-state foes.

In its four wins, ETSU is averaging 70.0  points per game, while winning by an average of 17.5 points. The Bucs are allowing just 52.5 points per contest and limiting opponents to 33.8 shooting. Ledarrius Brewer is averaging 15.5 points and 5.8 rebounds per game in the Buccaneer wins, while David Sloan is posting 9.3 points and 4.5 assists.

The Bucs are looking to knock off an SEC team for the second straight year, while eyeing a win over a Power-5 opponent for the fourth time in the last six seasons. Last year, ETSU went down to Baton Route and easily took down LSU, 74-63. In 2015-16, the Bucs beat Georgia Tech on a last-second three from Ge’Lawn Guyn, and a year later, Hanner-Mosquera-Perea’s lay-up led the Blue and Gold to a 67-65 victory at Mississippi State.

Like the Bucs, Alabama also rolls into Tuesday’s game with a 4-3 mark after the Tide suffered a 73-71 home loss to Western Kentucky on Saturday.

Alabama opened the season with an 81-57  win over Jacksonville State on Nov. 25, while winning two of three at the Maui Invitational in Asheville as the Tide defeated UNLV (86-74) and Providence (88-71). The Tide also rallied from 16 points down to beat Furman last Tuesday, 83-80.

Alabama is led by Herbert Jones as he’s averaging 14.0 points and 6.9 rebounds per game, while Jaden Shackelford and John Petty Jr. have accounted for 24 of the Tide’s 61 made threes. Petty, who has made a team-leading 13 from long distance, earned all-SEC honors a year ago.

Alabama, who was ranked No. 25 in the Coaches Poll to start the season, was picked to finish fifth in the SEC Preseason Media Poll.

Tuesday marks the fourth all-time meeting between the two programs with Alabama winning the previous three – the most-recent being a 114-74 decision on Dec. 1 in Tuscaloosa. The Bucs allowed a program-record 19 made threes in that contest, while Ronald Steele set the single-game school record for assists with 18.