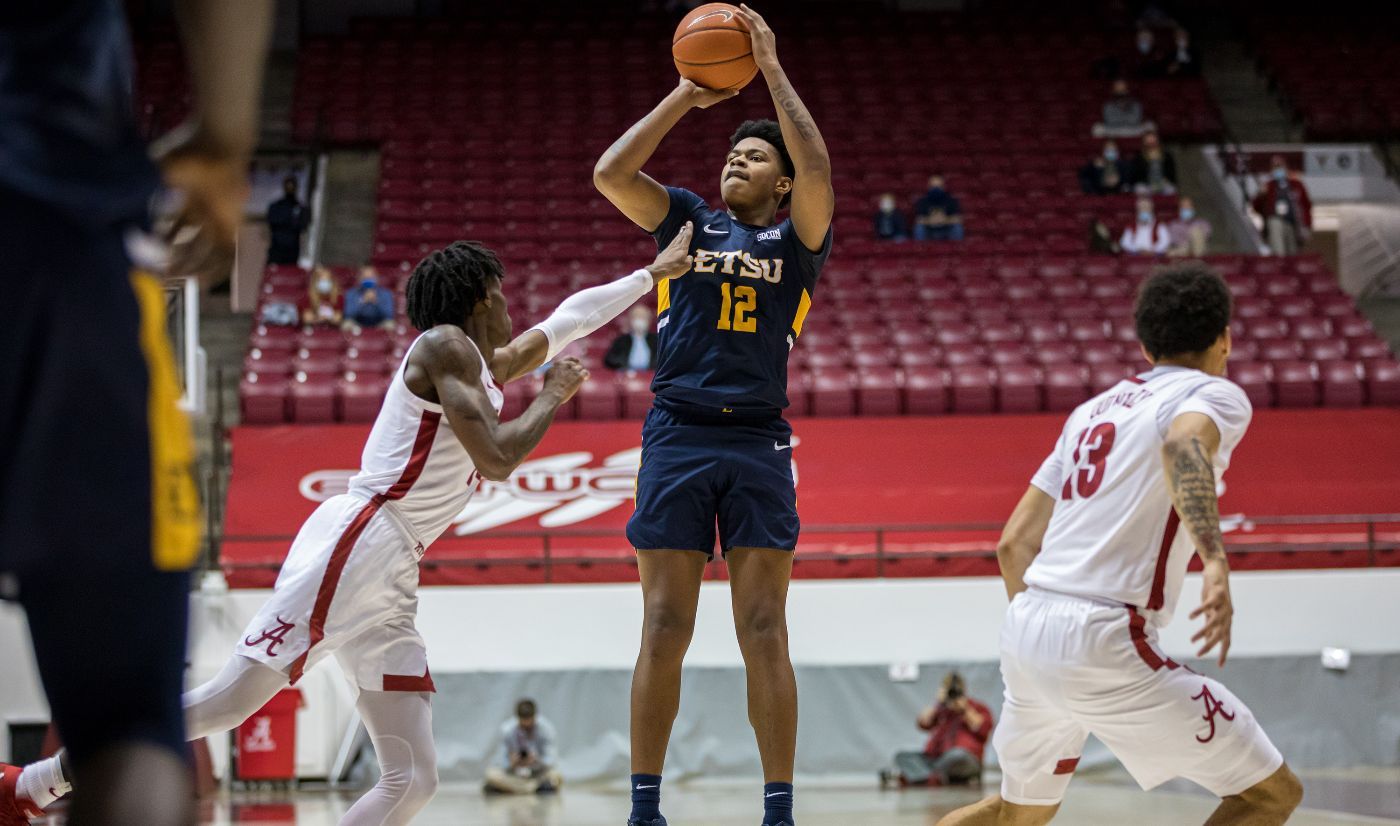 TUSCALOOSA, Ala. (Dec. 22, 2020) – Through the first 25-plus minutes it looked like the Buccaneers were prime for another Power-5 win.

Unfortunately, foul trouble set in early in the second half, and Alabama capitalized.

With the Tide leading by two, senior center Silas Adheke (Lagos, Nigeria) picked up his fourth foul five minutes into the second half and Alabama used a 15-3 run to open a double-digit lead en route to downing ETSU, 85-69, on Tuesday night inside Coleman Coliseum.

The Bucs saw their three-game win streak snapped as ETSU ended non-conference play with a 4-4 record, while Alabama, who was picked to finish fifth in the Southeastern Conference, moved to 5-3.

Tuesday marked the 73rd time the Bucs played an SEC opponent, while the Blue and Gold were eyeing their fourth win over a Power-5 opponent in the last six years.

Despite the 16-point loss, ETSU shot 48.0 percent from the field (24-50), marking its highest shooting clip against a Division I team this season.

ETSU was out-rebounded by 10, 39-29, with Alabama holding a plus-19 margin in second-chance points, 21-2. The Tide also turned 20 Buccaneer turnovers into 20 points on the offensive end.

The Bucs, who entered the night ranked 13th in the country in field goal percentage defense (35.8), saw the Tide shoot 48.3 percent from the floor (29-60), while also knocking down 12 three-pointers.

Damari Monsanto (Pembroke Pines,  Fla.) led the Bucs with a career-high 23-points, while he also grabbed a career-best nine rebounds. Monsanto was 8-of-13 from the field an accounted for six of the Bucs’ nine made threes.

After having his run of six straight games scoring in double figures come to a halt last Saturday, Ledarrius Brewer (Meridian, Miss.) got back into the groove as he ended with 18 points and two steals.

Alabama’s Jaden Shackelford led all players with 26 points on 8-of-13 shooting from beyond the arc, while Jahvon Quinerly added 14 points and generated nine of the Tide’s 20 assists.

ETSU started off strong as they scored nine of the first 12 points before the Tide responded with nine unanswered to go ahead, 12-9 at the 14:23 mark. From there, the half was tightly contested as neither team led by more than five points and Monsanto’s hot hand caused Alabama fits. After the Tide went up by three midway through the frame, the Blue and Gold hit Alabama with a 7-1 run, capped by Monsanto’s first three of the night, putting ETSU ahead, 20-17 with 7:26 left before the break. Alabama then used a 9-2 run to go up four, but again Monsanto knocked down another triple to end the surge. A minute later the Buccaneer guard connected on another long-range jumper to pull ETSU within two, 30-28. Monsanto’s fourth and final three of the stanza tied the game at 35 and Bama hit one of two free throw attempts in the final seconds to take a 36-35 lead into the locker room.

The Bucs held a pair of leads in the early stages of the second half as a Ledarrius Brewer three-pointer put ETSU up 38-36 and a lay-up by Sloan made it 40-39 with 18:21 remaining.

However, foul trouble set in, and Alabama made its run.

With Adheke picking up two fouls over a two-minute span, moving his total to four, the Tide saw their lead grow from two to 14 over a five-minute stretch and Alabama went up, 60-46 with just over 10 minutes left to play.

ETSU was able to cut its deficit to eight when Monsanto drained another three, but Shackelford answered with one of his own on Alabama’s ensuing possession, making it 67-56 with 6:12 to play. Again, the Bucs inched back to nine following a jumper by Marcus Niblack (Leesburg, Fla.), but just as he did before, Shackelford netted another three on the next trip down, taking the wind out of the Buccaneer sails with less than five minutes remaining. The Tide eventually pushed their lead to 20 and went on to win by 16.