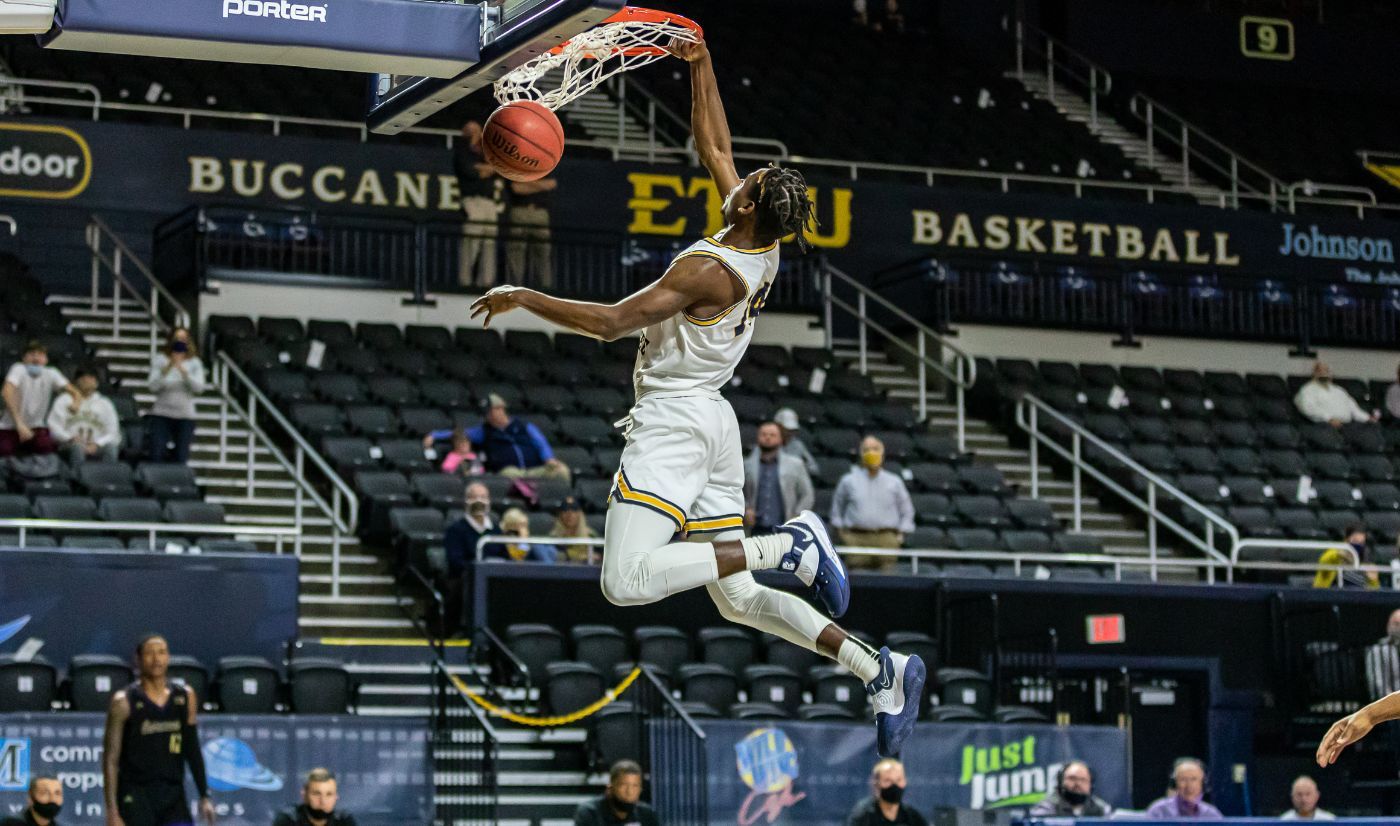 The ETSU men’s basketball team got that in Wednesday’s SoCon opener, but behind dominating performances from Ledarrius and Ty Brewer (Meridian, Miss.), the Buccaneers landed the knockout punch – courtesy of a 53-point second half outburst – as the Bucs rallied for an 86-78 win over Western Carolina inside Freedom Hall.

ETSU, who improved to 5-4 and 1-0 in conference play, kept its winning streaks intact over the Catamounts as the Bucs have now won 12 straight in the series and 15 consecutive at home. Overall, the Blue and Gold have won 29 of the last 30 against the Catamounts. With the loss, the Western Carolina dipped to 7-3, 0-1.

The Bucs’ 86 points marked a season-high against a Division I opponent, including the 53 in the second half.

Both teams’ shooting percentages were nearly identical as they each shot 50 percent from the field, while ETSU hit at a 40 percent clip from beyond the arc (10-25) and Western finished at 37 percent (10-27).  The Bucs made 31 field goals, compared to the Catamounts’ 27.

The two squads each grabbed 33 rebounds; however, ETSU was plus-4 on the offensive glass (11-7), resulting in a plus-11 margin in second-chance points, 15-4.

ETSU finished with 13 steals and forced 19 turnovers, equating to 20 points off the Catamount miscues.

Wednesday marked the first time this season ETSU had fans inside Freedom Hall. The Bucs are allowing 10% capacity, which allowed 618 fans attend the SoCon opener.

The Brewer Brothers combined for 45 points on a blistering 18-of-24 shooting as Ty netted a game and season high 24 points, while Ledarrius registered a season high 21 points, seven rebounds and career-high seven steals.

Western Carolina had four players score in double figures with local product Matt Halvorsen leading the charge with 19 points on 5-of-8 shooting from beyond the arc.

Both teams got off to a slow start in the opening five minutes, but the Catamounts threw the first punch as they used a 7-0 run to go up 15-6 following fast-break dunk by Tyler Harris at the 11:23 mark. Western Carolina pushed its lead into double figures following a three-pointer from Mason Faulkner at the midway point of the half and the Catamounts led 32-21 with 3:32 remaining. However, the Blue and Gold closed the half on a 12-6 run, cutting their deficit to five at the break, 38-33.

The Brewer brothers kept the Bucs within striking distance as they combined for 27 of the 33 points and were 11-of-13 from the field, compared to the rest of the team going 2-for-20. Ledarrius led the Bucs with 14 points and Ty added 13 on a perfect 5-of-5 shooting off the bench. Both teams made 13 field goals in the first half, while Western Carolina was plus-1 from beyond the arc (5-4) and plus-4 at the free throw line (7-4).

The Bucs carried the momentum into the second half as they started the stanza on a 13-3 run to grab their first lead of the night, 46-41, following a steal and fast-break lay-up by Smith two and a half minutes in. Western Carolina quickly responded with 11 unanswered points to regain the lead and eventually pushed the margin to eight when a steal and score by Xavier Cork made it 58-50 with 13:18 remaining. ETSU fought back and landed another punch over the next five minutes as they mounted a 17-4 run to recapture a 67-62 lead following Ty Brewer’s third three-pointer of the night. The Bucs never relinquished their lead, but after seeing their margin grow to as many as 11 and leading by 10 with less than three minutes to play, the result wasn’t solidified until the closing seconds. With ETSU ahead 81-71, the Catamounts used a 7-0 run to pull within three with 1:27 to play, but the Buccaneer defense flexed their muscle and held the visitors from Cullowhee, N.C. scoreless for the remainder of the night en route to securing the conference-opening victory.

ETSU now rings in the New Year with a road trip to Greensboro as the Bucs take on UNCG Saturday at 5 p.m. inside the Greensboro Coliseum.