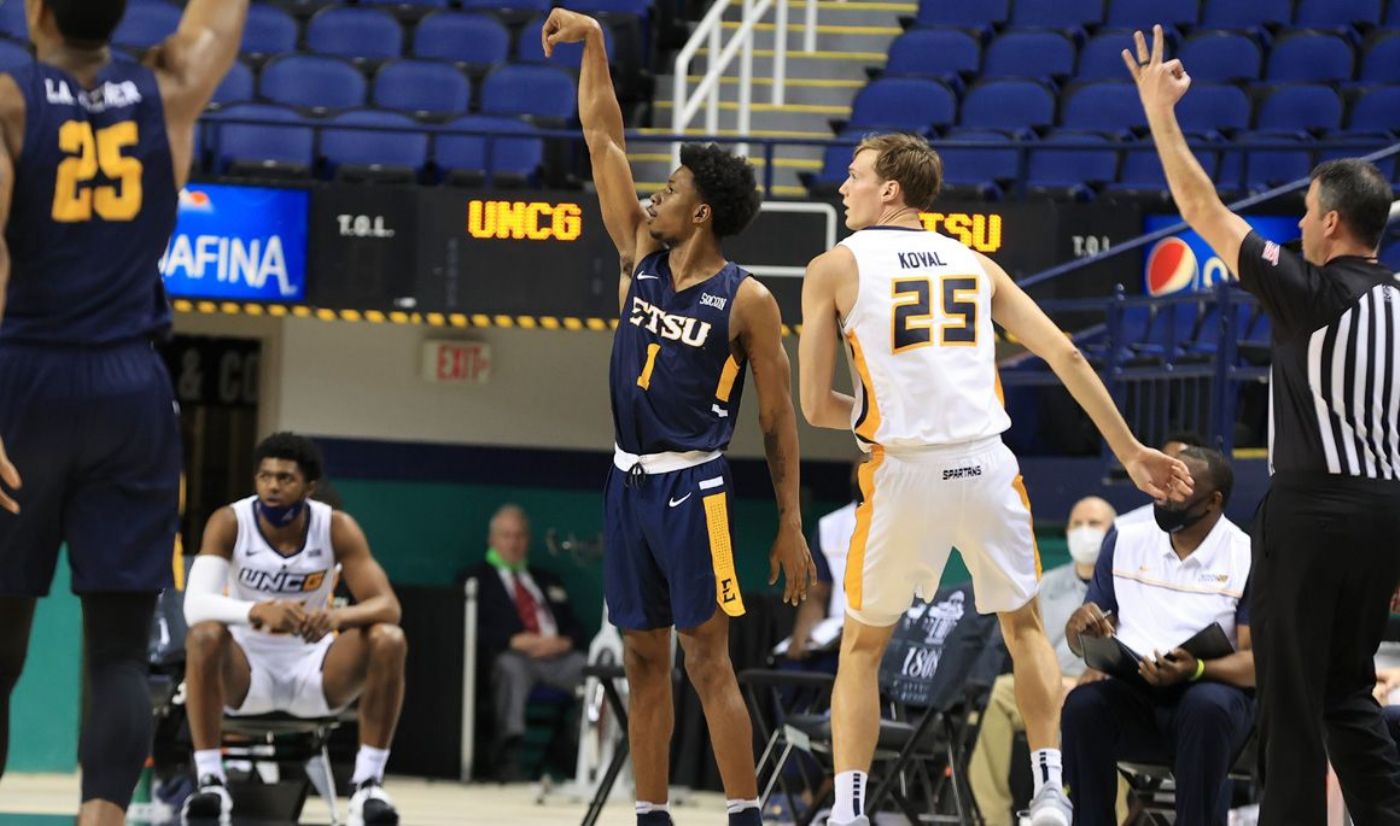 GREENSBORO, N.C. (Jan. 2, 2021) – The ETSU men’s basketball team parlayed strong starts in both halves to cash in a 10-point road win at UNCG, as the Buccaneers earned a 71-61 win over the Spartans on Saturday inside Greensboro Coliseum.

The Bucs, who improved to 6-4, 2-0 in SoCon play, opened the game on an 18-8 run, while starting the second half on a 19-3 surge to lead by as many as 18 before securing the Bucs’ win in Greensboro for the second straight year.

ETSU outrebounded UNCG – one of the top rebounding teams in the country – by 17 (46-29) and turned 16 offensive rebounds into 22 second-chance points.

The Blue and Gold hit 70 percent at the charity stripe (14-20) and registered 26 points in the paint.

Despite allowing UNCG scoring the first two points of the contest, ETSU led for nearly 38 minutes of the game with the score knotted twice at 2-2 and 33-33.

UNCG had its four-game win streak snapped as the Spartans moved to 5-4, 0-1.

Junior guard Serrel Smith (St. Petersburg, Fla.) scored a career-high 16 points on 5-of-8 shooting (3-of-4 from beyond the arc), while Ledarrius Brewer (Meridian, Miss.) notched his third career double-double – finishing with 18 points and 11 rebounds.

Freshmen Truth Harris (Mount Vernon, N.Y.) knocked down a key three-pointer late in the first half as the Spartans made a run to pull within a point, while Richard Amaefule (London, England) had a clutch tip-in for his two points and grabbed four rebounds.

Miller led all players with 24 points on 9-of-19 shooting, while the rest of UNCG’s team was held to 10-of-39 from the field. Miller had five turnovers to three assists and only one steal.

The Bucs stormed out of the gates by scoring 10 of the first 12 points before extending their lead to 10 when a second-chance opportunity by Ledarrius Brewer made it 18-8 five minutes into the contest. From there, ETSU’s lead hovered around the 10-point threshold before a pullup jumper by Smith pushed the advantage to 14, 27-13, near the midway point of the frame. However, after hitting on 11 of its first 17 shot attempts, ETSU went cold and UNCG mounted a 15-2 run to clip its deficit to one, 29-28, with 3:39 remaining before the break. Following a Buccaneer timeout, Harris made his first appearance of the contest, and David Sloan (Louisville, Ky.) found the rookie guard wide open for a corner three to stop the spurt. The Spartans pulled even at 33 in the final seconds, but Sloan went the distance to end the half with a driving lay-up, making it 35-33 after 20 minutes of play.

Just as they did in the first half, ETSU set the tone early in the second by scoring the first eight points and eventually turned that into a 19-3 run to go ahead by 18, 54-36, after Patterson grabbed an offensive board and kicked it out to Smith for a triple at the 10:47 mark. Patterson then followed with a three a minute later, but another shooting funk settled in as the Bucs were held without a field goal for the next seven minutes. Fortunately, the Blue and Gold got to the charity stripe as Ty Brewer (Meridian, Miss.) hit a pair and Adheke connected on three of four to keep the Spartans from inching closer. Finally, Smith’s third triple stopped the field goal drought which extended the lead back to 11, 65-54, with 2:47 remaining. The three-pointer proved to be the dagger as ETSU went on to win by 10.