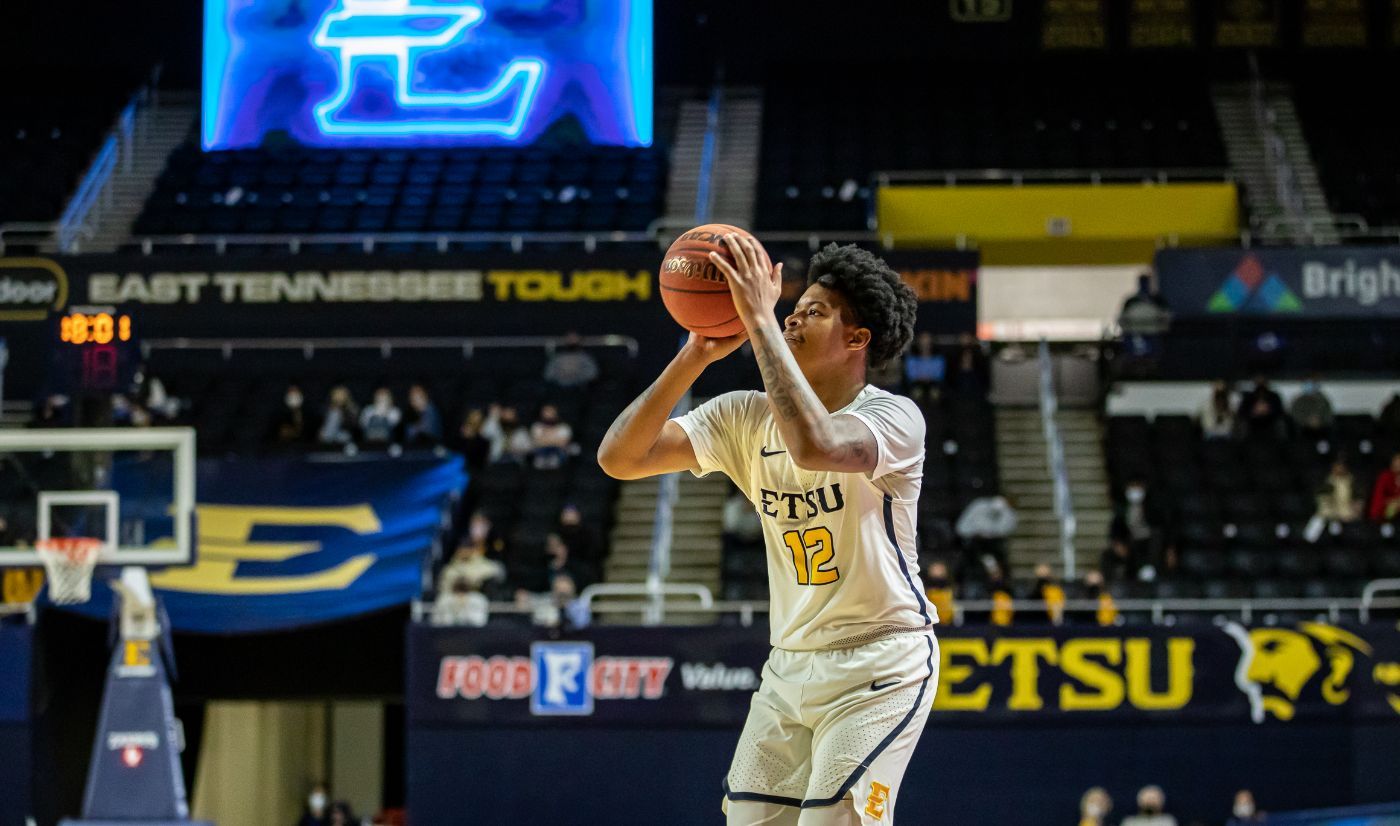 Both ETSU and VMI combined for 27 made three-pointers – including the Buccaneers draining a school-record 16 – as the Blue and Gold outlasted the Keydets in an offensive onslaught, 92-81, on Monday night.

ETSU shot a blistering 57 percent (33-58), while hitting on a season-best 53.3 percent from beyond the arc – finishing 16-of-30. The previous three-point record of 15 was set nine different times with the most-recent coming against the Keydets back on Jan. 11, 2016 inside Freedom Hall.

ETSU, who went 9-of-14 from beyond the arc in the second half, totaled 53 points in the final 20 minutes, marking the third time the Bucs have scored over 50 points in a half this season.

The Blue and Gold led for the majority of the contest after holding the lead for over 37 minutes, while there were only four ties and two lead changes in the early stages of the second half.

Red-shirt freshman guard Damari Monsanto (Pembroke Pines, Fla.) collected his first collegiate double-double as he ended with 19 points and a career-high 14 rebounds. Monsanto hit the Bucs’ 16th and final three of the night, pushing the ETSU’s lead back into double figures, 86-76, with 1:34 left to play.

After sitting out Saturday due to the COVID re-acclimation rules, red-shirt junior Ledarrius Brewer (Meridian, Miss.) didn’t miss a beat. Brewer scored 17 of his team-high 23 points in the first half as he went 9-of-16 from the field (5-of-10 from three) and now sits on 997 career points heading into Wednesday’s road game at Western Carolina.

Senior David Sloan (Louisville, Ky.) tied a career high with 18 points and dished out six of the Bucs’ 15 assists, while Serrel Smith (St. Petersburg, Fla.) netted 15 points and has now scored in double figures in each of his first three games of the New Year.

VMI’s Greg Parham led all players with 27 points on 10-of-20 shooting, while Jake Stephens added 19 points and nine rebounds in the losing effort.

The Bucs sprinted out of the gates by scoring the first nine points, but despite leading the entire half, ETSU was unable to gain any breathing room as they took a 39-36 lead into the break. With the Bucs ahead 18-11, VMI scored six straight points to pull within one at the 11:25 mark. From there, ETSU pushed its advantage back to six – and eventually led by nine with 2:52 left – but the Blue and Gold were held scoreless for the remainder of the half and VMI inched to within three.

ETSU was 16-of-29 (55.2%) shooting in the first half with Brewer going 7-of-12 for his 17 points. For the half, the Bucs were 7-of-16 from beyond the arc as Brewer led the club with three triples. The Bucs scored 13 points off five VMI turnovers, while ETSU assisted on half of its 16 makes.

VMI carried its run into the second half as they scored the first five points to take its first lead of the night, 41-39, following a three by Parham one minute and 16 second into the stanza. The lead didn’t last long as the Bucs scored on the ensuing possession – a jumper by Monsanto – and after four ties over the next four minutes, ETSU regained momentum.

With things gridlocked at 53 at the 14:34 mark, the Bucs used a 21-6 run to open a 15-point lead, 74-59, thanks to Silas Adheke (Lagos, Nigeria) finding Sloan open for a long-range bomb with 7:27 remaining. The Buccaneer lead stayed in double figures for the next five minutes until VMI made it a seven-point game with 2:01 showing on the clock, but ETSU didn’t led the visitors move any closer as they closed out the 11-point win.

ETSU now hits the road to wrap up the season series with Western Carolina on Wednesday afternoon. Tip-off is set for 4 p.m. inside the Ramsey Center.